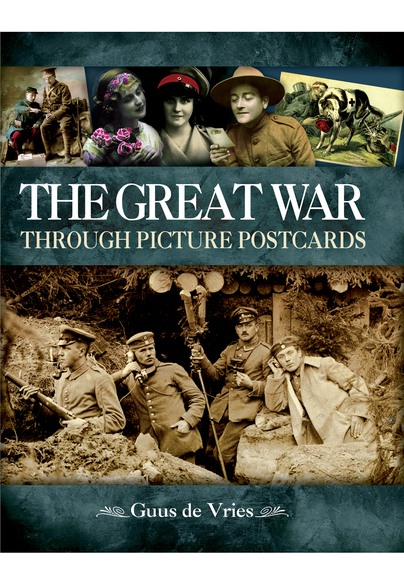 Click here for help on how to download our eBooks
Add to Basket
Add to Wishlist
You'll be £4.99 closer to your next £10.00 credit when you purchase The Great War through Picture Postcards. What's this?
Need a currency converter? Check XE.com for live rates

During World War I, the picture postcard was the most important means of communication for the soldiers in the field and their loved ones at home, with an estimated 30 billion of them sent between 1914 and 1918. A postcard from home offered the soldier in the trenches a short escape from their daily hell, while receiving a postcard from a man on the frontline was literally a sign of life. These postcards create a vivid record of life at home and abroad during the Great War, both from the messages they carried and the pictures on the cards themselves.
The depiction of the war on the contemporary postcards is extremely diverse:
The ways in which the postcards depict the war differs greatly; from simple enthusiasm, patriotism and propaganda to humour, satire and bitter hatred. Others portray the wishes and dreams (nostalgia, homesickness and pin-ups) of the soldiers, the technological developments of the armies, not to mention the daily life and death on the battlefield, including the horrific reality of piles of bodies and mass-graves.
Altogether, this extraordinarily vivid contemporary record of the Great War offers a unique and detailed insight in the minds and mentality of the soldiers and their families who lived and died in the war to end all wars.

This is a different account of the progress of the War, by a Dutch historian, and it includes around 500 representative samples of cards from the major countries involved in the conflict.

This is a high quality book that surprised me with the variety of postcards that Guus de Vries included. You get clear, bright photographs of nearly 500 postcards, many in color

de Vries sets the tone by discussing general postcard history and why the simple correspondence cards became a craze in the early 20th century. He explains the popularity of using postcards for wartime correspondence: "Active soldiers could often mail them free of charge and they were prettier to look at than letters and could be written faster, as they needed less text. By choosing the image, the sender could perhaps convey his feelings or sentiments more easily than by putting them into words."

Lavishly illustrated, the book is filled with large, clearly reproduced images of historic postcards. Each postcard is accompanied by an explanation of the imagery and its context, or how it fits into the social, political or military atmosphere of the time. The narrative and the postcards create a comprehensive tome worthy of any historian's shelf.

'I was surprised by the variety of topics covered. The sentimental cards, sanitised pictures 'from the front' and so on are expected, but there are more showing casualties and other gruesome aspects of the war than I'd had expected. We also get satirical cards, humorous cards, propaganda and messages of support.

This is a splendid book, providing a glimpse into the visual world of the participants in the First World War.'

In a most inspired idea, this book shows some incredible reproductions of postcards from the Great War. An informed text puts them all in their proper context. The printing and reproduction of this book is superb, and I can’t recommend it enough.

A nicely laid out, full colour book, offering a new insight to the life on the frontline. The only downside is that we don't get to see the messages on the reverse of the cards.

There is a perennial problem with most books on postcards; either an author has a story to tell and adds pictures of cards in at the end as arbitrary illustrations or a collector decides to amass interesting cards into a book without knowing much about them. I am happy to say this new release, The Great War Through Picture Postcards by Guus de Vries follows neither of these failed formulas. What we are presented with is a narrative that actually tries to explain the role of postcards in World War One. This is by no means an easy task as the use of postcards at this time was enormous, and the range of subjects they capture represent every aspect of this conflict. This is not an in depth history of the war but a look into one narrow aspect of it, one that’s essential to anyone who truly wants to grasp this period. No one interested in history should ever be satisfied with reading only one book on a given subject, and this publication will surely help round out anyone’s knowledge of the war.

Dr. Guus de Vries is a historian from Oosterbeek, in the Netherlands. He completed his studies at Nijmegen and Tours, focusing his research on the development and use of military small arms in the nineteenth and twentieth centuries. He has published numerous articles in specialist magazines in Belgium, Germany, Finland, the Netherlands, Russia, the UK and the USA, and has also co-authored seventeen books on firearms history.