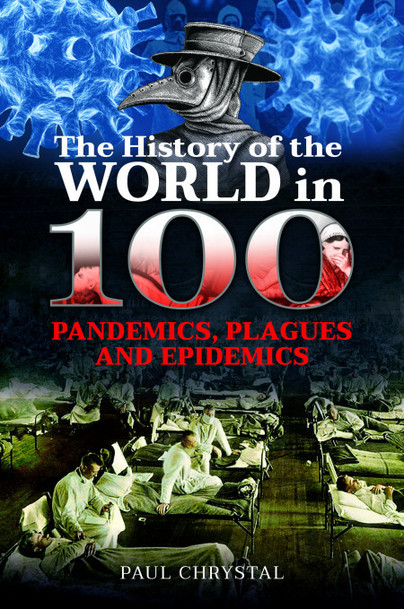 The History of the World in 100 Pandemics, Plagues and Epidemics (Hardback)

Preorder
Add to Wishlist
You'll be £20.00 closer to your next £10.00 credit when you purchase The History of the World in 100 Pandemics, Plagues and Epidemics. What's this?
+£4.50 UK Delivery or free UK delivery if order is over £35
(click here for international delivery rates)

This revelatory book charts and explains the impact and consequences of successive pandemics, plagues and epidemics on the course of world history – all through the lens of today’s ongoing global experience of COVID 19. Ranging from prehistory to the present day, it first defines what constitutes a pandemic or epidemic then looks at 20 guilty diseases: including cholera, influenza, bubonic plague, leprosy, measles, smallpox, malaria, AIDS, MERS, SARS, Zika, Ebola and, of course, Covid-19. Some less well-known, but equally significant and deadly contagions such as Legionnaires’ Disease, psittacosis, polio, the Sweat, and dancing plague, are also covered.

The book is ordered chronologically. Each chapter features an explanation and description of epidemiology, sources and vectors, morbidity, mortality, governmental response and reaction, societal response and impact as well as psychological issues where known - and the political, legal and scientific consequences it had or has for each locus at a local and international level. In short – the book explains how each of the events both made and influenced subsequent history in its own way, particularly how each shaped future medical and scientific research and vaccine development programmes. It also examines myths about infectious diseases, the role of the media and social media. Perhaps most importantly, Paul Chrystal asks what lessons have been learnt. Will we be better prepared next time? Because, if one thing is sure, there is going to be a ‘next time’.

Paul Chrystal has classics degrees from the Universities of Hull and Southampton; he is the author of one hundred or so books, a number of which are about confectionery and beverages.

He has written features on aspects of the history of food and drink for the Daily Express , and has featured on the BBC World Service, Radio 4’s PM programme and various BBC local radio stations talking on a wide range of subjects, but notably confectionery. In 2019 Paul contributed to a six-part series for BBC2 ‘celebrating the history of some of Britain’s most iconic craft industries’ – in this case chocolate in York. He has been history advisor for a number of York tourist attractions relating to chocolate. Paul is editor of York Historian, the journal of the Yorkshire Architectural and York Archaeological Society. In 2019 he was also guest speaker for the prestigious Vassar College New York-London programme.