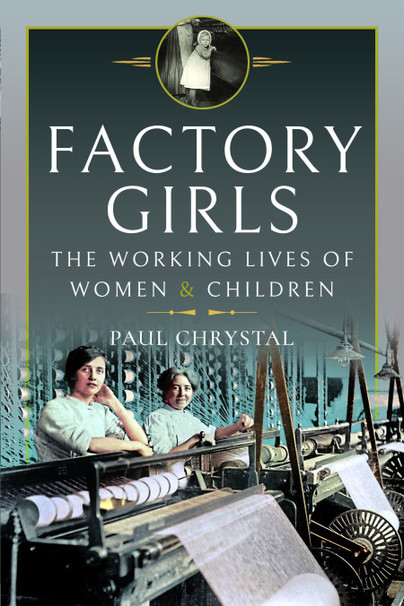 The Working Lives of Women and Children

Preorder
Add to Wishlist
You'll be £14.00 closer to your next £10.00 credit when you purchase Factory Girls. What's this?
+£4.50 UK Delivery or free UK delivery if order is over £35
(click here for international delivery rates)

Ever since there have been factories, women and children have, more often than not, worked in those factories. What is perhaps less well known is that women also worked underground in coal mines and overground scaling the inside of chimneys. Young children were also put to work in factories and coalmines; they were deployed inside chimneys, often half-starved so that they could shin up ever narrower flues.

Many women, and children, were obliged to take up work in the mills and factories – long hours, dangerous, often toxic conditions, monotony, bullying, abuse and miserly pay were the usual hallmarks of a day’s work – before they headed homeward to their other job: keeping home and family together.

This long overdue and much-needed book also covers the social reformers, the role of feminism and activism and the various Factory Acts and trade unionism.

We examine how women and children suffered chronic occupational diseases and disabling industrial injuries – life changing and life shortening – and often a one-way ticket to the workhouse. The book concludes with a survey of the art, literature and the music which formed the soundtrack for the factory girl and the climbing boys.


Informative, centred on women's and children's experiences, and detailed but concise research analyses. When learning about the Industrial Revolution, the voices of women often go unheard, but this book puts their stories/experiences/hardships right in front of us. This book delves into the lived realities of what it meant to be in the informal and formal sectors of the economy as a woman.

I recommend this book to anyone who wants to learn more about the Industrial Revolution, women and the economy in the early twentieth century.

“Factory girls" by Paul Crystal the history goes back so far we even learn why “traditional“ women’s work was was considered to be in the home. It’s packed full of the different work women did throughout early history and even into World War II. In the back of the book they have photos actually showing the different women in the different roles. It talks about how women’s work has changed throughout the years and how in someways it stayed the same. It explains how modern inventions affected the work women did in the many different opportunities it gave them. I truly enjoyed this book and highly recommend it. I love history in this book totally entertain me I think it was well researched and with the personal stories and poems the author put in the book also made it very entertaining.

After reading what must be dozens of fictional books on this subject I had to give this non fiction historical book a try. And wow! well worth it!
This book is a really detailed and informative read about the significant part women and minors of both sexes played in the Industrial Revolution. How, indeed the so called revolution would not have come to be without both women and children playing a part.
Book outlines how both groups were usually on the bottom of the ladder in regard to work, pay, safety etc and how a ‘woman’s work was never done’ with them then having no to go home to look after there families.
This is not a happy tale but a necessary one to tell of the lives and fates of the factory girls who helped shape the future of many industries.
Well researched and well written.