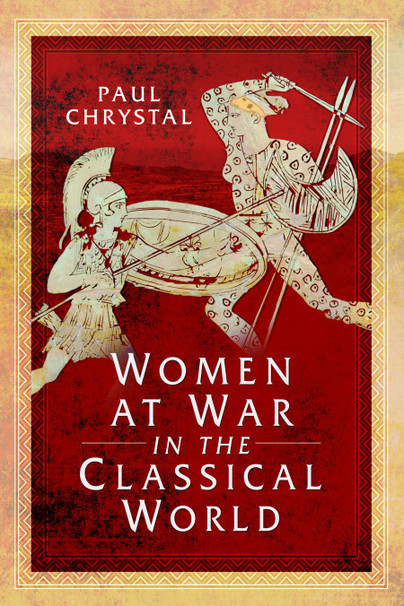 Women at War in the Classical World (Paperback)

'Chrystal's work has given us a study remarkable for its detail and the breadth of its scope, an analysis backed up with ample referencing... a work of considerable scholarship and insight, one that anyone with an interest in ancient warfare will not be able to ignore' - Dr Stanley Ireland, Department of Classics & Ancient History, University of Warwick.

You'll be £14.99 closer to your next £10.00 credit when you purchase Women at War in the Classical World. What's this?
+£4.50 UK Delivery or free UK delivery if order is over £35
(click here for international delivery rates)

Paul Chrystal has written the first full length study of women and warfare in the Graeco Roman world. Although the conduct of war was generally monopolized by men, there were plenty of exceptions with women directly involved in its direction and even as combatants, Artemisia, Olympias, Cleopatra and Agrippina the Elder being famous examples. And both Greeks and Romans encountered women among their barbarian enemies, such as Tomyris, Boudicca and Zenobia.

More commonly, of course, women were directly affected by war as non-combatant victims, of rape and enslavement as spoils of war and this makes up an important strand of the authors discussion. The portrayal of female warriors and goddesses in classical mythology and literature, and the use of war to justify gender roles and hierarchies, are also considered. Overall it is a landmark survey of how war in the Classical world affected and was affected by women.

‘Women at War in the Classical World’ by Paul Crystal reveals how much the ancient authors said about women at war - which is a surprising amount, and how much they also didn’t say ….. which is also a lot!!! The huge area of omission is that of rape and other atrocities in war - whether that’s because it was considered so normal that it was not worth mentioning or because of the sensitivity of the ancient authors is undecided.
The book looks at the representation of goddesses and war, the warlike women in the Iliad and the Odyssey, ‘Teichoskopeia’ (the women’s view and role in war from the city walls), the Amazons (although I’d have like to see a lot more about the Scythians), women’s warlike roles in theatrical productions and the role of Spartan women. There’s a useful catalogue of warrior women mentioned by ancient sources with brief biographies. The book covers Greek, Macedonian and Roman women in separate sections.

Great information, a little more information that I anticipated. Enjoyable and definitely a book you want to keep around. Well done Paul Chrystal.

This is one of the best books that I have read this year! I absolutely loved the breakdown, and the many different facets and facts this author brought out. While women are generally in the background, not all women were relegated to historical footnotes, and this book brings out some of the women who stood out and made a name for themselves.

If you enjoy history, you are going to want to get a copy of this book. It is the perfect addition to any bookcase!

Women at War in the Classical World is a thought-provoking book and well worth reading to broaden our understanding of classical warfare.

This unique study looks at the roles of women in war in ancient history, producing information and conclusions that may surprise many readers. The perception of the role of women in war is shaped by the French heritage and the Abrahamic religions where women are rated as chattel, a narrow and highly biased view of history – Most Recommended.

This is a very useful survey work, giving us a clear idea of how devastating warfare often was for the women caught up in it, as well as making it clear how often women played an important role in warfare.

The title suggests an examination of the role of women in classical world combat, and this is included, but Paul's book is so much more - it's a comprehensive and fascinating look at classical females from history as strategists and commanders-in-chief as well as actual combatants. An important contribution to the history of classical warfare.

This book is great for people interesting in history and women's lives in the classical world.

Before reading this book, I could have probably named 3 or 4 "women warriors", so it came as a bit of a shock to discover a list as long as my arm. The research that has gone into this book is incredible - almost as astonishing as some of the lives mentioned. The names and facts are delivered in a way that's enjoyable and easy to read. "Women at War in the Classical World" doesn't just focus on the women who fought, but takes the reader on a journey through the impacts of war on women in general too. I found it absolutely fascinating.

There are a huge amount resource and references. The structure of the book allows you to dip in and out and read individual stories – of which there are a lot.

This is a book that will stay on my bookshelves for a long time and one I will refer too. I also need to make sure I include warrior women in conversations and examples more when we look to reenact and teach combat.

I would highly recommend this book for any HEMA practioner, for the look at early period history but also re-enactors looking for strong female leads and characters to re-enact.

Good for those who are studying this period and want a look at the women in this period. You get some biographies, mens accounts and different topics like being warriors, wives, rape, women gladiators, marriage and more.

Chrystal's work has given us a study remarkable for its detail and the breadth of its scope, an analysis backed up with ample referencing... a work of considerable scholarship and insight, one that anyone with an interest in ancient warfare will not be able to ignore.

This was a very good, interesting book. It focused on a part of woman's history that is rarely even thought of and brought it to life! Read it!!

It was an interesting read, and I took a lot away from it. It certainly gave me a lot to think about.

There are not enough words for me to say how much I enjoyed this book. It's filled with mentions of characters that have been neglected by other historians and accurate facts that support this idea that women are connected to the very core of war not just as bounty and victims, but as strong political and social figures. I loved it! Great for research purposes or even if you're just looking for a book that will leave you smarter than you were before reading it.

An enjoyable look at Women at war, which is a subject that’s been neglected by historians in the past.

A book that is decidedly interesting and well-worth a read for all people.

Who has not heard of the Amazons or Helen of Troy, of Cleopatra or Dido? But who has heard of Youtab Queen of Egypt, gory Erictho or the supportive Turia? If you want to know about any woman involved in warfare in the ancient world, this is the book for you. This is also the only full-length study of the topic. The historical spread extends from Homer, with a look back at prehistoric times, to the end of the Roman empire, with references forward to women’s contemporary experiences of war. Geographically this study extends from Britain in the northwest to as far east as the Greeks and Romans had any contact with or knowledge of. In general women on the edge of the Roman empire or outside it seem to have been more martial than the dutiful Greek and Roman wives within it: the chapter on Foreign Women Fighters is the longest in the book. The author has based his account on both plentiful primary and secondary written souces and visual evidence from art or archaeology.
Rather that overwhelming the reader with abstruse theorising or academic debate, Paul Chrystal presents a straightforward and informative survey of women both well-known and lesser-known involved in war in all its aspects, as warlike goddesses, martial literary figures, leaders of armies, advisers, supporters or victims. His account is enlivened with interesting anecdotes and helpful illustrations. Central to the book is Part 2: Women as Victims of War, which describes the all too familiar story of rape, enslavement and loss of homeland, then as now. All in all then this study serves to examine women and war in all their aspects and helps to rectify the bias towards the part men played in war in classical times.

Author article as featured in, on the roles played by women in war across the ancient Greek and Roman worlds - some wielded weapons and led armies; others were a catalyst for conflict

Many readers may only see women at war as those who played a critical role in two World Wars. This view may be coloured by the Christian and Norman attitude to women as second class citizens but, even then, women were at least victims of war and a very small number were more actively involved as monarchs and,
occasionally, as fighters. In the ancient world, women were more closely involved, but not on the scale of those who served during
two world wars. – Highly Recommended.

Who is this book ideal for? Well, first of all, those interested in the history of women in antiquity and/or warfare. Secondly, I would argue this is also perfect for those who have a general interest in the ancient world; the book looks at the subject through the lenses of women in theatre, mythology and factual history; providing the reader with access to several aspects of female Roman history.

Chrystal’s book demonstrates clearly the true extent of that involvement in a work remarkable for both its comprehensive treatment and depth of scholarship. The fact that the study extends to nineteen chapters, and the range of his bibliography in terms of both ancient testimonies and modern studies are immediate testimony to this.

A work of considerable scholarship and insight, one that anyone with an interest in ancient warfare will not be able to ignore.