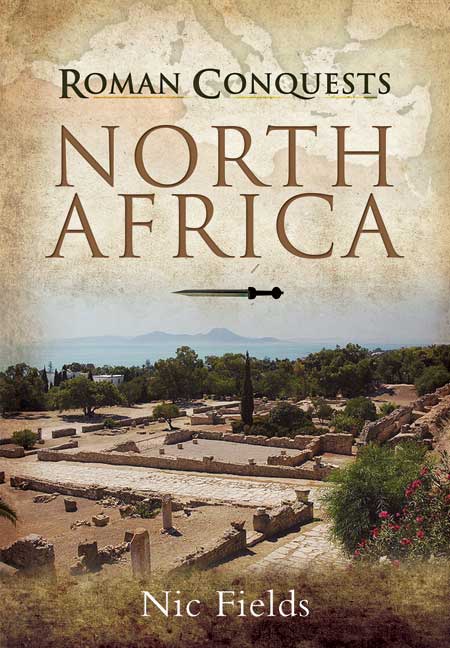 Click here for help on how to download our eBooks
Add to Basket
Add to Wishlist
You'll be £4.99 closer to your next £10.00 credit when you purchase Roman Conquests: North Africa. What's this?
Need a currency converter? Check XE.com for live rates

The third in the Roman Conquests series briefly covers Rome's first forays into the dark continent during the First and Second Punic Wars, then covers in detail her vindictive final conquest and destruction of Carthage in the Third Punic War.

The subsequent long wars against the slippery Numidian prince, Jugurtha, which tested the Roman military system to the limit, also occupy a central place. With a cast of characters including Hannibal, the Scipios, Marius, Sulla and the wily Jugurtha, this is sure to be a popular addition to the series.

Like the other volumes, this book gives a clear narrative of the course of these wars, explaining how the Roman war machine coped with formidable new foes and the challenges of unfamiliar terrain and climate. Specially-commissioned colour plates by Graham Sumner bring the main troop types vividly to life in meticulously-researched detail.

As arguably the most powerful and intelligent people of the period, it might be easy to believe the Romans ruled comfortably and without any competition however as this book reveals this wasn't always the case. Roman Conquests North Africa shines a light on the struggle for survival between Rome and her rival across the Mediterranean, Carthage. The book details Hannibal's invasion of Italy which pushed Rome to the brink of surrender only for the Romans to retaliate and catapult the fight into Carthage resulting in their eventual victory. Through bullet pointed text and useful maps the reader also gains a knowledge of topics ranging from the guerrilla warfare of the Numidians to characters such as Scipio Africanus. Dr Nic Fields utilises his PHD in ancient history to great effect and along with his experience in the Royal Marines, allows the book to come alive with passion.

The Roman Empire, was one of the greatest, or even the greatest, empires that has ever existed. By traveling to new lands, they became much more powerful. However it all had to start somewhere, they were building their way up to this famous empire, that is still known today, but at one point they were nearly destroyed, how different would the world have been with out the Romans influence across the world? This book goes through the Roman's battle and conflict with Carthage, along the coast of Africa which is now known as Tunisia. The book goes through the Roman journey to gain revenge for the near destruction of their city by the famous Carthaginian leader Hannibal. It shows how the Romans turn the tables and bring the fighting to Carthage so that they are fighting them on their land instead of their own, and this leads to the destruction of Carthage and the start and rebuild of Rome, and eventually leading to the Roman empire.

This book also has a section at the beginning where it gives the reader some maps, to help see how close Carthage and Rome where, also showing different maps ranging from 8th Century BC to 3rd Century BC. Also the maps show other famous lands among Ancient Rome and Greece such as Troy and Corinth. In the middle of this book there is also a section which displays some fantastic and fascinating pictures, such as marble statues and stone carvings of Roman legionaries. Nic Fields also provides a Prologue and Epilogue, giving us some more background information from popular texts such as The Aenied by Virgil.

This book goes through the battles and conflicts of the Third Punic war, with the defeat if Hannibal at Zama around 202BC, however Nic Fields does not stop there, he goes on to describe the warfare against the Numidians, who proved to be a great test for Rome and its forces. But it goes onto describe the success of Rome and how it became the master of North Africa, which help it go onto become the great empire that they are remembered for today. This book highlights the challenge the Roman forces will have had and how they will have had to adapt to new lands, new terrain and a new climate, and how they came out victorious when the odds were stacked up against them

This book would be great for someone who loves or even admires the Roman empire and their conquests around the wold, because this fascinating book brings together the challenges that the Roman's had and shows how they came over these obstacles to defeat the enemies that were threatening to defeat them. This book gives a fascinating and fantastic battle across the Mediterranean as Rome struggles for survival, and this book would fascinate anybody with interest with Roman life and warfare.

Roman Conquests: North Africa is part of a series of books documenting the rise of the Roman empire in this volume Nic Fields describes the campaigns by which the
Romans turned the tables and carried the fight into the enemy's homeland, which led to to the final defeat of Hannibal at Zama and the destruction of Carthage itself during the third Punic War. Nic Fields shows stunning research skills and puts together characters such as Hannibal, Scipio, Africanus, the wily of Jugurtha, Metellus, Marius and Sulla, telling their stories and their part in the the Romans brutal march to empire. The book contains many tales such as The guerrilla warfare of the Numidians and their famous light cavalry which pushed the legions and their commanders to the limits. Like other books in the series it tells of how the Romans dealt with change in climate, terrain and of course foe. The book as been well researched by Nic Fields and his passion for the history of the Roman empire shows through once again.

The expansion of the Roman Empire is widely known. This book provides an insight into a specific part of this expansion – the move to Northern Africa. The author, Nic Fields, provides a comprehensive account of Rome’s conflict with Carthage, and Rome’s eventual triumph over this enemy during the Third Punic War. In relation to this, Rome’s particular struggle with and defeat of the famous invader Hannibal, is also covered in detail. Subsequent conflicts are also given attention, in particular the war against Jugurtha of Numidia. Whilst this was one conflict that proved to be difficult for the Romans, they did eventually succeed in their aim to defeat Jugurtha, securing Rome’s dominance over Northern Africa. As noted, other individuals that populate the book include ‘Scipio Africanus…Metellus, Marius, and Sulla’. This book provides a balance between warfare, and the culture of the lands and populations. Nic Fields’ book is informative, rich in detail, and highlights a key part of the history of the Roman Empire.

Our fascination with the Romans has been re-lightened in recent years with big blockbuster films such as Gladiator and TV shows such as Rome, more and more people are searching for more information on this fascinating ancient community. One of the latest crazies is to discover the conquering side of the Romans, and no other book delves deeper into the Roman conquests than Nic Fields' North Africa. A lot of books cover the Roman conquest of Britain and other European countries but few books go into detail about the Romans conquest into North Africa. Dr Nic Fields Roman Conquests: North Africa is the next exciting book into the world of the Romans and describes their bloody trail through North Africa, including the defeat of the legendary Hannibal at Zama. Although, I am not really a fan of ancient history, once I began reading this book I really couldn't put it down. Fields uses his in-depth knowledge to piece together the Romans trail through this beautiful county, but unlike a lot other Roman conquests books this book is fast paced and exciting without losing any of the integrate details of Roman history. I absolutely loved this book and it is a must read for anybody who enjoys the gory detail of the Roman TV shows and films.

A scientist will tell you that there is always change. A philosopher will say that nothing ever changes. North Africa feels as if it has both properties at the same time, a region apart from the continent it belongs to, almost like an island, a unique environment that persists in arid stasis and hosts mighty conflicts upon the sand.

As I write the region is struggling with civil unrest that borders on open warfare. Two generations ago, the Rats and the Fox fought across the desert in the sweeping battles of World War Two. Before that, the colonial wars and the romance of the Foreign Legion. The domination of the Ottoman Empire. The Spanish revival. The Arab conquests. The barbarian migrations. And finally, at last, we come to the era of Roman domination.

Roman Conquests - North Africa describes the clash of empires that brought this region into Roman hands and the ill fated rebellion of their former ally that followed. There is a certain resonance with recent history, sometimes an uncomfortable sympathy for one side or another, and among the wars are campaigns that have become almost legendary. This is, in many ways, a very familiar tale.

This should not surprise us. We are blessed with sources that rank among the most detailed and objective of any Roman period. It is unfortunate that history is written by the victors, and thus undeniably biased, but the author has clearly made an effort to balance the debate and present both sides in context.

That brings me to illustrations. If there is a common fault in history books, it's that the context is often less important than adding atmosphere. The modern colour photograph is insidious as yet another accessory of our visual age. Whilst the maps are relevant and very clear, there seems to have been a struggle to decide which colour illustrations to include within the limited space allowed. To my mind, a book should really decide whether to be visual or textual, and remain true to the style chosen. If there's any fault I can level at Roman Conquests - North Africa, that would be it. Nonetheless, the battle is not yet lost.

Storytellers win over their audience by way of two possible strategies. One is to tell the tale we all know, and to tell it well. The other is find something in the story we've never heard before. Where will the storyteller take us? Will this be a tale of courage, drama, passion, and tragedy to thrill the heart, or perhaps a catalogue of academic appraisals to stimulate the mind?

Nic Fields chooses a path that encompasses both ideas. On the one hand, he lays before us the relevant events and outcomes, inexorably leading toward Roman victory. On the other, he leaves us with informative chapters on the armies that faced each other. He manages to colour the tale with strong impressions of what motivated the characters and empires as he probes the details of politics and war. I applaud the authors willingness to throw light on common misconceptions.

The curious thing is that I can't help feeling the author wanted to write a different kind of book. The very first line starts with "Let us begin our story...". Who could possibly resist that? Right from the start it invites the reader to delve deeper. By the close of the book it feels more disjointed, despite some excellent conclusions that hint of future fortunes of the Roman Empire, and an appendix on Roman politics that in my view should be required reading for the aspiring historian of this period.