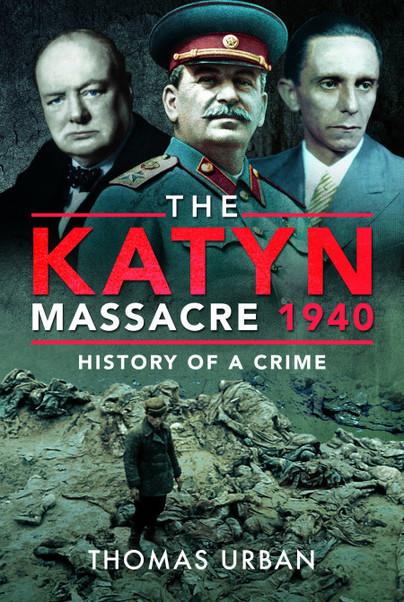 Click here for help on how to download our eBooks
Add to Basket
Add to Wishlist
You'll be £1.99 closer to your next £10.00 credit when you purchase The Katyn Massacre 1940. What's this?
Need a currency converter? Check XE.com for live rates


This is an excellent book and if reading during 2022, will look like the playbook of the Russian leadership, the Army and the Secret Police.

"Author Thomas Urban succinctly guides the reader through the multiple investigations, as well as the numerous conflicting claims and counterclaims as to who was responsible for the massacre."

The war crime committed by the Soviets on the orders of Stalin should have achieved international condemnation. The discovery of the mass grave of Polish officers shows Stalin for what he really was. – Most Highly Recommended

This offering from Pen and Sword written by Thomas Urban, for me presents everything I needed to know about these crimes in a manner that makes it understandable, and clears up the fog surrounding these events. From the Germans using it in an attempt to separate support between the Eastern and Western allies, to the Soviets to indicate the brutality of the enemy this crime had gone on un-resolved for 50 plus years, until the Soviets admitted responsibility in the 1990’s, moving along to today where the new Russian government is again creating fog over the crime.

This is a fantastic book written by Thomas Urban going into great depth and detail, clearly written and explained for the reader.

This reviewer is old enough to remember the protracted post-war controversary and the sense of satisfaction that many felt when responsibility for the crime was eventually acknowledged by the perpetrators. This book leaves no stone unturned in getting to grips with the whole story up to and including the watershed moment when the truth was properly acknowledged. The author brings a journalist's eye to the topic and every line of investigation is stitched into a compelling narrative which makes this book a riveting read. One is left with tremendous sympathy for the families of the victims - those who were murdered in 1940 and the witnesses who were hounded, tortured and sometimes killed during the years that followed. It is an extremely comprehensive piece of research that must rank as the definitive account of an appalling crime that continues to arouse passions, even today - not just in the act itself but also in the cynical manipulation of the facts afterwards. Recommended.