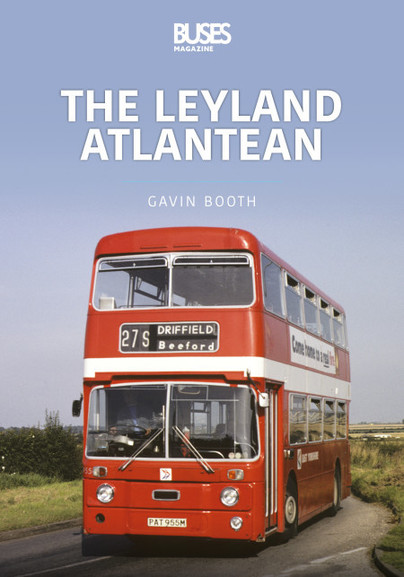 Preorder
Add to Wishlist
You'll be £11.99 closer to your next £10.00 credit when you purchase The Leyland Atlantean. What's this?
+£4.50 UK Delivery or free UK delivery if order is over £35
(click here for international delivery rates)

The Leyland Atlantean revolutionised the layout of double-deck buses in Britain with its rear-mounted engine, setting a standard that has dominated designs for the past 60 years. Appearing in the late 1950s, when the bus market was dominated by the rear-entrance/front-engined double-deck design that had its roots in the 1920s, the Atlantean represented as significant a change in the bus industry as diesel replacing steam on Britain’s railways. Out with the old and in with the new. However, it was not plain sailing; there were the inevitable teething problems and the design underwent considerable change before it – and the competitors it inspired such as the Daimler Fleetline and Bristol VRT – could come to dominate the market.

By the end of the 1960s, economics dictated that the traditional front-engined double-decker had had its day. In the Atlantean and its competitors, the British bus and coach industry had vehicles capable of taking on and meeting the challenges, both at home and abroad, that the contemporary world presented. The Atlantean was probably the last British-designed and -built bus to achieve massive sales worldwide, with the list of operators both at home and abroad being legion.

In this fully illustrated book, Gavin Booth looks back at the development of the Leyland Atlantean from its origins in the 1950s and examines its importance over the past half-century.

Although the Atlantean has largely disappeared from public service, its influence remains and, through the handful that remain in service and those that survive in preservation and through the pages of this book, it is possible to pay tribute to one of the most significant bus designs of the second half of the 20th century.

Gavin Booth has written or edited more than 80 books since 1969. He has contributed extensively tothe enthusiast and trade press, and created and has edited the magazine Classic Bus for 13 years. He has worked in and around the bus industry for more than 50 years, latterly as Chair of the passenger-focused body Bus Users UK. He is a past-President of The Omnibus Society.