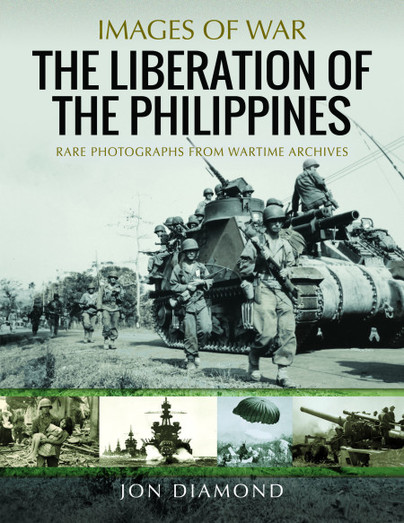 The Liberation of The Philippines (ePub)

Click here for help on how to download our eBooks
Add to Basket
Add to Wishlist
You'll be £4.99 closer to your next £10.00 credit when you purchase The Liberation of The Philippines. What's this?
Need a currency converter? Check XE.com for live rates

Highlight: This superbly illustrated work in the Pacific War Images of War series leaves the reader in no doubt as to the intensity of the land, sea and air operations required by the Allies to defeat the Japanese.

"...a very good reference for modelers looking for ideas for dioramas."

The Images of War series works well on two levels: as an introduction to the campaign or battle and as a visual supplement to other more in-depth works. Diamond’s contribution here satisfies both requirements. His text and photographs convey the magnitude of the fighting while keeping their sense of a very human conflict often fought at close quarters. What also comes across is the variety of combat situations the Americans and Filipinos encountered, and the range of tactics used to defeat the Japanese. This is therefore a solid addition to the Images of War series.

The photos throughout the book all have informative captions which add to the main text and while a few are well known, the bulk I hadn't seen before. The devastation on some of the islands is obvious, and some pictures quite graphically illustrate the fate of so many Japanese troops who followed 'Bushido' chose death over capture, though there are more captured soldiers towards the end of the war.
Thanks to the benefit of being able to look backwards in time, we know that the Japanese Imperial forces were finally defeated in WW2, but it wasn't an easy job. These photos show the seriousness of the war in the Pacific, the effort required by the sea, air and land forces of the USA along with the fierce resistance offered by their Japanese opponents, prior to the impact of the atomic bombs which brought the war to an end. Good reading and photos for anyone interested in the history of the war in the Pacific.

Credit should go to the Images of War Series, which I think as the books that cover the Far East are providing an important job, in they are making the Far East an equally important part of the war, as well as the Western Europe Theater which certainly does dominate WW2 coverage in this country. As someone whose Grandad fought out in the Far East books like this gives the impression that these battles out East were important and those fighting weren’t forgotten because they weren’t fighting in Europe. What I love about these books is that even though they are all still images, these photographs can still tell so much of the story or the battle. The pain, suffering and bravery are quite evident to see and some can tell the story so much in one photograph. The Text that accompanies the photos in this book is equally excellent and always strike the right balance, Jon Diamond has done a great job of telling the story of the Philippines here, a book I would happily recommend to others.

"...dioramists can get plenty of ideas from these pages."

Jon Diamond MD is a kidney specialist in the USA with a deep interest in the Second World War. He is a keen collector of photographs. His Stilwell and the Chindits, War in the South Pacific, Invasion of Sicily, Invasion of the Italian Mainland: Salerno to Gustav Line, 1943-1944, Onto Rome 1944; Anzio and Victory at Cassino, Beyond Rome to the Alps; Across the Arno and Gothic Line, 1944-1945, Op Plunder - The Rhine River Crossing, MacArthur’s Papua New Guinea Campaign, Hell in the Central Pacific, Liberation of the Philippines, Burma Victory, The Fall of Malaya and Singapore and The Battle of Okinawa 1945 are all published by Pen and Sword in the Images of War series.