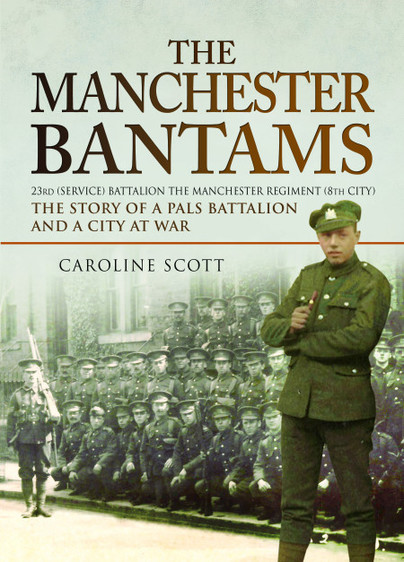 Add to Basket
Add to Wishlist
You'll be £21.00 closer to your next £10.00 credit when you purchase The Manchester Bantams. What's this?
+£4.50 UK Delivery or free UK delivery if order is over £35
(click here for international delivery rates)

In May 1916 Major Eustace Lockhart Maxwell, a former Indian cavalry officer, was given command of an infantry battalion in France. After 48 hours with his new unit, Maxwell wrote to his family: 'The outstanding characteristic of those who belong to it seems to be their extraordinary self-complacency! Esprit de corps is a fine thing, but the satisfaction with which they regard themselves, their battalion, its internal economy, its gallantry, its discipline, its everything else, is almost indecent! If at the end of a month my opinion of them is half as good as their own, I shall think myself uncommonly lucky.' This was the 23rd Manchester 'Bantam' Battalion, a unit entirely composed of men of a height between 5ft and 5ft 3”, and its esprit de corps was about to be severely tested.

The 'Bantams' left colourful, characterful, moving and often amusing records of their experiences. Using a wealth of previously un-published sources, this book follows the Manchester men through their training, their experiences of the Somme and the Third Ypres Campaign, to Houthulst Forest where, in October 1917, the Battalion was 'practically annihilated'.

Caroline Scott has researched and written an excellent volume of history covering a battalion, that outside of Manchester, has been forgotten and has given us an extensive history of the battalion...

... This is an excellent history, for those interested in the Manchester Regiment and those who have a wider interest in the battles of the Great War.

Caroline's second book this month takes as its subject something quite amazing - the formation of a battalion comprising only men between five feet and five feet three inches - one cannot help but think of the company of dwarves in The Hobbit - not in any derogatory sense, but in the sense that they actually thought it necessary to form such a battalion in the first place. Were there other such "bantam battalions", one wonders. Caroline's book is something of an eye-opener!

A fitting, well written and researched memorial to the battalion.

Making the best of excellent sources and well-illustrated with contemporary photos this book could serve as a template for anyone considering writing a battalion history themselves.