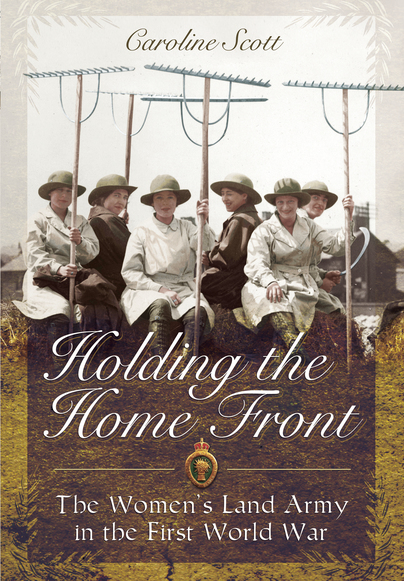 The Women's Land Army in The First World War

You'll be £19.99 closer to your next £10.00 credit when you purchase Holding the Home Front. What's this?
+£4.50 UK Delivery or free UK delivery if order is over £35
(click here for international delivery rates)

In recent years the Second World War's land girl has caught the public imagination. Weve seen her in films, television series and novels. We might be misremembering her, we might have distorted her image into one that suits a twenty-first century audience, but we haven't forgotten. Other things have been forgotten, though. One could be forgiven for supposing that the story of the Women's Land Army starts in 1939. But its a much older and more complicated history.

British agricultural policy during the First World War was held up as a success story; coming through a great national emergency, domestic food production was higher at the end of the war than at the start, the average calorific value of the British diet barely changed and bread never had to be rationed here. As the press reported starvation and food riots overseas, the 1918 harvest was held up as one of the great achievements of the War.

In 1917, at the darkest hour, when Britain's food security looked most precarious, it was said that, If it were not for the women agriculture would be absolutely at a standstill on many farms. Is that true? Were women really keeping the wheels turning? Using previously unpublished accounts and photographs, this book is an attempt to understand how the return of women to the fields and farmyards impacted agriculture - and, in turn, an examination of how that experience affected them.

This is the story of the First World War's forgotten land army.

A largely forgotten aspect of WWI has been the affection and interest in the 1917s Land Army, using previously unpublished photographs, cartoons and poetry penned by the women themselves, some wonderful characterful voices are raised for the first time in this hard backed book by Caroline Scott, a freelance writer and researcher whose particular interest is in the roles played by women in wartime

This is a timely opportunity to consider women’s work during wartime.

I would definitely recommend this book if you’re interested in the World Wars, history or female empowerment. It was an overall engaging read which was clearly very in-depth and well-researched. This book greatly highlights the Great War needed women to be mobilised in large numbers to make up for the loss of men.

A great, in depth history of the women’s land army in ww1. Some great, unknown (to me) facts that I really enjoyed learning. The author has unearthed some interesting stories and really done her research.

Holding the Home Front is an interesting and useful addition to the ever-burgeoning literature on the Great War and on women.

Whether your interest is social history, family history or self -education, this is a wonderful book that comes thoroughly recommended.

This highly readable book plunges us into the past and with the use of diaries, interviews and personal accounts we are able to see how the women living during the war took on roles that were unfamiliar to them.

A history of Britain's woman's land army is a must read for all world war 1 history and woman's history readers.

Very interesting informative a look at what women did on the home front during the war. This is a subject I find really interesting and I learned from & enjoyed this book.

Most of us have heard of the Land Girls of the Second World War, who heroically took to trousers and ploughs to feed the nation during a time of serious food shortages. Not quite so many of us know about the Land Girls of the First World War, though, the ones who paved the way for their successors a couple of decades later. Their story is fascinatingly and engagingly told by Caroline Scott in Holding the Home Front.

The first third of the book tells of the beginning of the war, as more and more young men were called up, and the growing realisation that women were going to need to be recruited to work on the land. This is by far the most frustrating portion of the book, not through any fault of the author, but because the attitudes of everybody, but most particularly (and unsurprisingly) the men involved were so ANNOYING! Like, who cares if the nation starves as long as women don’t lose their femininity by working on the land!

And yes, it was a different time, attitudes have changed in the last century and so on. I don’t care. It’s still ridiculous and infuriating and I was so irritated! It seems like things really changed around 1916, as more men died and fewer could be spared from their training during harvests. After that point, it’s much less annoying to read about, though some of the farmers were still clearly douchwidgeons, again unsurprisingly.

I thought Holding the Home Front presented a well-rounded picture of the whole situation, though. Caroline Scott traces official decision-making through the First World War, detailing how the attitudes of the men in power changed as the situation did, but she also uses lots of first hand accounts from the people involved, from those (particularly women) campaigning for more women to work on the land, to the women who volunteered to do so, and occasionally from the farmers whose farms they worked on. It was quite fascinating to see the disparity between these groups, especially towards the beginning of the war, and how it began to be overcome.

Also, I really appreciated that Caroline Scott took the time to acknowledge the fact that while she did a ton of research and used as many first-hand sources as she could find, there are whole groups whom she could hardly touch. In particular, many of the Land Girls reported that the working class women who worked on or lived in the vicinity of the farms they were assigned to were hostile to them. It’s easy to speculate about the reasons for this – not least the fact that these exact women had been forced off the land in the previous decades by men who told them that hard physical work was degrading and unfeminine. But the bottom line is that there are almost no records that come directly from those working class women, partly because they were accustomed to hard work and wouldn’t have felt the need to write about it, as the middle- and upper-class women did, and also because they didn’t have the same level of education which would have made such a thing easy.

I enjoyed Holding the Home Front without reservation. It was an easy, engaging read which seemed well-researched, and I liked that the author had obviously thought beyond the evidence that was in front of her to acknowledge that there was additional evidence that was lost. I recommend it to anyone who’s interested in the Land Girls of the First World War.

Such an informative and well-researched book... I found the book very enlightening to what those women did during the WWI.

Dr Scott's book is very readable and accessible it follows the formation of the WLA and the personal experiences of the women, gleaned from diaries, journals, newspapers, official documents and later autobiographies. Fascinating anecdotes and highly informative statistics run through the volume as well as an excellent selection of photographs.

'Holding the Home Front takes an in-depth look at the women’s work in the First World War. This book doesn’t romanticize, but nor is it brutal or unkind. Instead it paints a picture of what happened when war struck the heart
of Britain...Insightful and extensive, this book is filled with quips and passages from the day. Caroline sheds a new
light on old times as she highlights not just the work women took to hand, but the people who made it possible, too.'

The story of the Women's Land Army during the Great War is here told with an excellent and informative narrative. It can be reasonable claimed that women fed the nation during the war; as son many worked n the land in agriculture as the men went off to fight. This is first class and well worth reading.

When one thinks of the Land Girls, one almost certainly thinks of their contribution to the darkest days of the Second World War, whereas in fact, there was a women's land army in full flow during the first world war too. Caroline's wonderful book sets the record straight with beautiful illustrations and witting testimony from people who were there and saw how hard these wonderful women worked to keep Britain going during their darkest hours. Superb.

The author has written a warm view of the WWI Land Girls who have been largely forgotten by history. The Great War needed women to be mobilised in large numbers to make up for the loss of men,
creating a revolution in society. The role of women in agriculture was a key part of that story. Much Recommended

A well-researched book covering the 1860s to 1930s, mainly focused on 1914-19. The book describes the state of agriculture before the First World War, which is necessary to understand the following chapters. It then gives an insight into the different phases of the Women's Land Army and the difficulties faced by those wishing to volunteer.

The many quotes from land girls give a glimpse into their daily lives and the attitudes of their employers. However, as the author states: "We can only hear the voices of the village women second-hand." The accounts are mainly from educated women, rather than local women returning to the work of their recent ancestors. This gives a slightly one-sided view although still highly insightful.

The book also highlights the changing role of women and how until 1917, with the change in government and increasing food shortages, there was real opposition to women returning to the land.

Highly relevant for those with ancestors in the Land Army or interest in the Home Front during the First World War.