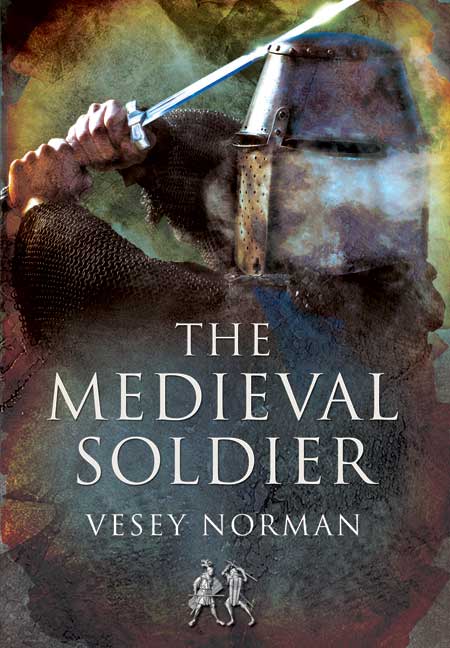 Click here for help on how to download our eBooks
Add to Basket
Add to Wishlist
You'll be £4.99 closer to your next £10.00 credit when you purchase The Medieval Soldier. What's this?
Need a currency converter? Check XE.com for live rates

The author outlines the development of the undisciplined barbarian war bands of the Dark Ages into the feudal armies of the early Middle Ages. It deals with the arms and equipments of the soldier, not only from surviving specimens but also from descriptions in contemporary medieval documents. Vesey Norman covers the slow development of tactics and the transition of the warrior from a personal follower of a war leader to the knight who served his feudal overlord as a heavily armoured cavalryman in return for land.

He details the attitude of the Church to warfare, the rise of chivalry and the development of the knights of the military orders, the Templars, the Hospitallers and the Teutonic Knights. He answers such questions as what classes of men made up the army, who commanded them, and how they were equipped, paid and organized. Since armies frequently has to be transported by water, a brief description of contemporary ships in included.

Vesey Norman was born in Delhi on 1930. He was educated at Trinity College, Glenalmond, Perthshire and London University, and has been Assistant to the Director of the Wallace Collection, in charge of the armouries.

He is a Fellow of the Society of Antiquaries of London & Scotland, and has visited most of the major collections of Europe. He is the author of Arms and Armour, Warrior to Soldier 449 to 1660, and Small Swords and Military Swords, and has contributed articles to a number of magazine.

Throughout the book, the attitude of the Church to warfare, the rise of chivalry and the development of the knights of the military orders, the Templars, the Hospitallers and the Teutonic Knights are explained in prolific detail. Along the way, the author answers such questions as what classes of men made up the army, who commanded them, and how they were organised, equipped and paid. Since armies were frequently transported by water, the book concludes with a brief description of contemporary ships from the period, making this a compulsive purchase for anyone wishing to learn more about this fascinating period of history.

For a newcomer with a general interest in military history the book serves as a useful and what commanders were trying to achieve.

The book looks at the development of the medieval warrior, starting with the barbarian war bands that overthrew the Roman Empire and ending with the Military Orders and crusaders. This is an ambitious work, looking at tactics, arms, armour, recruitment and command, pay and even transport.

The main problem with this book is that it was first published forty years ago. At the time it was a solid piece of work, well based on documentary and artistic evidence. Vesey Norman was already an acknowledged expert of medieval arms and armour in 1971, and went on to serve as Master of the Royal Armoury from 1977 to 1988 (with a residence in the Tower of London), and his level of expertise shows throughout the text.

In the four decades that have passed since it was written a vast amount of research has been carried out (some of it by Norman himself) - new documents unearthed, old documents rediscovered or better understood, new artworks have been found or noticed - and as a result our understanding of many of the topics covered here have changed. In some cases this has only changed minor details - the date that a type of sword or armour was first seen, or the discovery of a new type of equipment, but in the later periods whole new schools of thought have risen (and in some cases sunk again!) since this book was written.

This is still a useful book, but it is now best seen as a starting point for further reading, providing a solid base for a look at more recent discoveries.