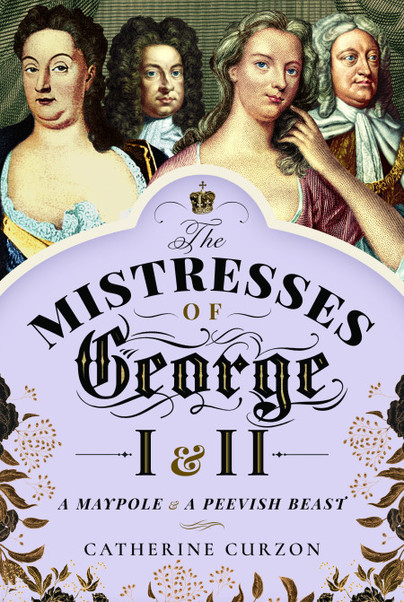 The Mistresses of George I and II (Hardback)

A Maypole and a Peevish Beast

Add to Basket
Add to Wishlist
You'll be £19.99 closer to your next £10.00 credit when you purchase The Mistresses of George I and II. What's this?
+£4.50 UK Delivery or free UK delivery if order is over £35
(click here for international delivery rates)

When George I arrived in England he found a kingdom in turmoil. Mistrustful of the new monarch from Hanover, his subjects met his coronation with riots. At George’s side was his mistress, Melusine von der Schulenberg, whilst his ex-wife languished in prison. Known as the Maypole thanks to her eye-catching figure, Melusine was the king’s confidante for decades. She was a mother to his children and a queen without a crown.

George II never forgave his father for tearing him from his mother's arms and he was determined to marry for love, not duty. Though his wife, Caroline of Ansbach, proved to be a politically gifted queen, George II turned to another for affection. She was Henrietta Howard, the impoverished Countess of Suffolk, and she was desperate to escape her brutish husband. As the years passed, the royal affair became a powerplay between king and queen and the woman who was mistress to one and servant to another.

Melusine and Henrietta's privileged position made them the envy of every courtier. It also made them a target of jealousy, plotting and ambition. In the tumultuous Georgian court, the bedroom and the throne room weren't so far apart.

I love Catherine Curzon's writing style, it makes non fiction books a joy to read. As with all her other books, she uses lots of primary sources and evidence to support her writing, and places it directly within her writing.
I found the difference between the way Melusine and Henrietta were treated by their respective kings very interesting, but it was clearly linked to the way they felt about their own wives.
I would definitely recommend this for anyone interested in early Georgian History, it gives a real insight into some of the goings on in the Royal Court.
4/5⭐

I thought this book was well-researched the author managed to treat the subjects in a way that was both respectful yet detailed and intriguing, also managing to maintain her focus on the women rather than the George’s... A fascinating read.

The King George's had very interesting mistresses, I thought this was a really well done biography and was well written. I enjoyed going all long this journey.

I have read a number of these ‘King George…’ books written by Catherine Curzon, and I have to say they are all a good read indeed. Her writing is excellent and I find her writing very engaging and interesting and this coming from someone who admittedly does not have much knowledge of King George and co. But I have learned a lot from this author. Centered around two mistresses, Melusine von der Schulenberg and Henrietta Howard, these are not always the most loveable of characters but in a way quite interesting and intriguing. A lot of research has gone into this well-written book.

This book focuses on two women, Melusine von der Schulenberg, and Henrietta Howard. Both were mistresses but their circumstances quite different. George I locked up his wife back in Hanover, and Melusine was very much the main woman in his life for more than 30 years. In George II’s court his wife ruled, and Henrietta was the approved mistress for 20yrs or so. It’s very interesting reading about this period in history, firstly as the Hanovers prepare for their future on the English throne, then the various court intrigues and politics once they’ve been crowned.

I didn't realize how much of a soap opera the Georgian era was. The two women's story was told in an engaging manner. I'm looking forward to read other nonfiction books that Curzon has written in the Georgian era.

I enjoyed this well-researched and accessible book. I dote on royal mistresses, but recognise that they can be a touchy topic to modern sensibilities. Curzon managed to treat the subjects in a way that was both dishy and respectful. She also managed to maintain her focus on the women while providing enough overview to place them in history without overexplaining so much that she lost them in history.

I’ve read a lot of books about the Georges. This was a well-researched, very accessible study of the mistresses.

Well researched, full of detail - I loved this
Fascinating book about a period of history I've always enjoyed

I've been reading about the British royals, in chronological order and his book came to my attention at the perfect time. There really aren't a lot of books about "The George's of England" available. Although I'm not normally a huge fan of biographies that aren't written in novel form, this one flowed nicely and kept my interest, throughout. It was interesting to read, not only about the Mistresses, but about the Kings, their wives and their children. The author obviously did a lot of research about all the different families involved. It was a great way for me to learn about these Kings and so many of those that surrounded them.

A rich tapestry of information and such level of detail that I really got an excellent feeling for the subjects of the book and their characters. Their stories were really insightful and a fascinating glimpse of the times within the upper echelons of society which was very eye opening and informative.
It is true sometimes that fact can be stranger than fiction and some of the actions and events within families and relationships would definitely give modern soaps a run for their money.
I found the style of writing very accessible and easy to read, without any previous background knowledge of the subject matter and the facts presently very well and in a way that was very engaging. Definitely recommend.

Melusine von der Schulenberg and Henrietta Howard were mistresses of Kings George I and II respectively. Both were left alone at a young age and rose to positions of massive prominence on a world stage, yet their stories were quite different. Melusine and George I were lifelong companions and she wielded enormous political influence, despite her lover's dour temperament. Meanwhile, Henrietta was forced into a loveless marriage which she could only escape by a place at the English court, a circumstance that led to a tenuous arrangement with George II and his wife Charlotte. Her place was never quite assured, and she never attained the prestige of either the lawful queen or her predecessor Melusine. It wasn't until she escaped life at court that she was able to find some measure of peace. This exploration of two women whose lives were simultaneously so similar and so different is a study of comparisons and contrasts in Georgian royal relationships.

I had no background in either of these women and I found their stories quite engaging. For those who aren't familiar with the Hanoverian dynasty, the repetition of names might be a bit daunting at the beginning, but once you get into the thick of the story it's easy enough to figure out who is who.. I'll say that I'm not quite sure why Curzon chose these two particular mistresses (George II in particular had several), as their stories seem to have as many differences as parallels, but I'm glad she did, as I've been introduced to two more fascinating historical women.

An engaging and gossipy look at the lives of Melusine von der Schulenberg, Duchess of Kendal and Henrietta Howard, Countess of Suffolk and their often difficult relationships with their royal lovers, George I and his son George II. Not always the brightest lights in the harbor, the first Hanoverian monarchs are also infamously known for their rather despicable attitudes towards women in their private spheres. Catherine Curzon has given us a colorful portrait of 2 royal paramours hankering after security and stability during their lives, the very steep price they had to pay in order to attain it and the amount of boorishness and oafishness they had to put up with from those two teutonic nitwits. A sad but captivating look at royal British history between 1714 and 1759 and a definitive confirmation that unfortunately Germany didn't gift Great Britain with its "best and brightest" after a century of difficult Stuart rule.....

Whatever problems the present Royal family may face seem minor in indeed compared to the numerous scandals, rivalries and power struggles endured by the first Hanoverian kings three hundred years' ago. Starting the story in late 17th century Germany and following on through the grumpy George I's arrival on these shores in 1714 through to his son's reign in the middle years of the century, Catherine Curzon's tale of the lifes and loves of the two unlovable monarchs and their respective mistresses is undeniably gossipy but aĺso well researched and very readable.