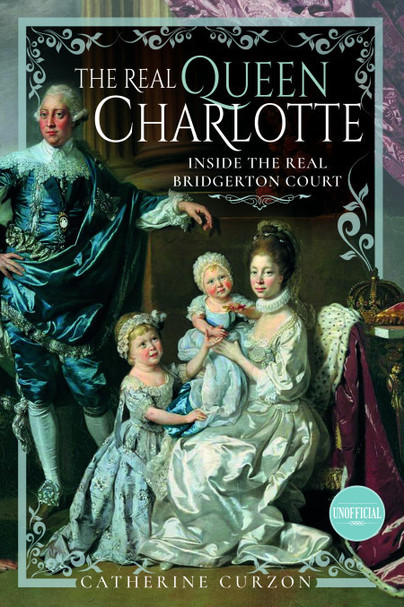 Inside the Real Bridgerton Court

Preorder
Add to Wishlist
You'll be £14.00 closer to your next £10.00 credit when you purchase The Real Queen Charlotte . What's this?
+£4.50 UK Delivery or free UK delivery if order is over £35
(click here for international delivery rates)

Known to millions as the imperious matriarch of Bridgerton’s court, Charlotte of Mecklenburg-Strelitz was still a teenager when she was chosen to be the bride of King George III. Shy, innocent, and sheltered, the orphaned princess and her youthful groom carried the hopes of a nation on their shoulders.

The placid and unassuming young couple symbolised a new beginning, but soon those hopes began to sour. Charlotte and George’s marriage lasted for nearly 60 years and produced more than a dozen children, but it was beset by unrest at home, war in the colonies, and the king’s encroaching madness.

As the royal couple battled against their critics, their political opponents, and sometimes even their own family, Charlotte learned what it really meant to be queen. Locked in a bitter struggle with her eldest son for the king’s future and with her daughters for their freedom, the timid young girl grew into an insular and domineering woman that few dared to cross.

Shouldering the burden of family disputes, ambitious courtiers, and the care of the man she adored, Charlotte of Mecklenburg-Strelitz presided over one of the most tumultuous eras that the monarchy has ever seen. As tragic as it was glittering, this is the story of her extraordinary life.

Fascinating story! Highly recommend for history buffs out there.

Bridgerton fans love Queen Charlotte. Her wigs, her gowns, her love for gossip...they all make her a most entertaining character. But what I liked about her was her reaction in season 1 to Simon's explanation for why he and Daphne needed to marry: friendship. Catherine Curzon provides an excellent bio of Queen Charlotte, especially with regard to the early years of her marriage to George III. It was a match made out of duty, but friendship blossomed and bloomed into love. That was the lesson Simon and Daphne discovered in their 'courtship'.
What makes Charlotte a tragic figure is how she had to watch her friend and love disappear bit by bit with each crisis the king had. Not only did she have that to deal with, she also had unruly sons bent on gaining power. She also had daughters that she kept on such a short rope that 3 didn't marry until they were in their 30s/40s. Today, that's not such a huge deal; in Charlotte's day, that was absolutely scandalous, especially for royalty. Ultimately, Charlotte suffered much loss, but none so great as the loss of her husband King George.
The book itself is a fast-paced read, separated into 3 acts. One could read it in one sitting or do what I did: read over the course of a several days. Doing the latter will allow for better understanding and empathy. Bridgerton gives a glamorous Queen Charlotte; Curzon gives us the real meat and potatoes Queen Charlotte. Trust me when I say the latter gives more depth and nuance to the former that all who read this book will appreciate.

I would love to thank Pen & Sword Books for sending me an e-copy of this book and totally enjoyed while reading this book! This is the first book I’ve ever read about Queen Charlotte.

So, let me tell something about this book. It’s a book which tells some informations about the real Bridgerton Court.

The calm and unassuming young couple, Queen Charlotte and King George III, represented a new beginning, but those hopes soon faded. Charlotte and George's marriage lasted nearly 60 years and produced over a dozen children, but it was marred by domestic strife, war in the colonies, and the king's growing insanity.

When Charlotte of Mecklenburg-Strelitz was still a teenager when she was chosen to be the bride of King George III. She was very shy, pure, and sheltered and also she was an orphan princess. Her youthful groom carried the hopes of a nation on their shoulders.

Charlotte learned what it meant to be queen as the royal couple faced criticism, political opponents, and even members of their own family. The timid young girl grew into an insular and domineering woman that few dared to cross, locked in a bitter struggle with her eldest son for the king's future and with her daughters for their freedom.

Charlotte of Mecklenburg-Strelitz presided over one of the monarchy's most turbulent eras, juggling family feuds, ambitious courtiers, and the care of the man she adored. This is the story of her extraordinary life, as tragic as it was glittering.