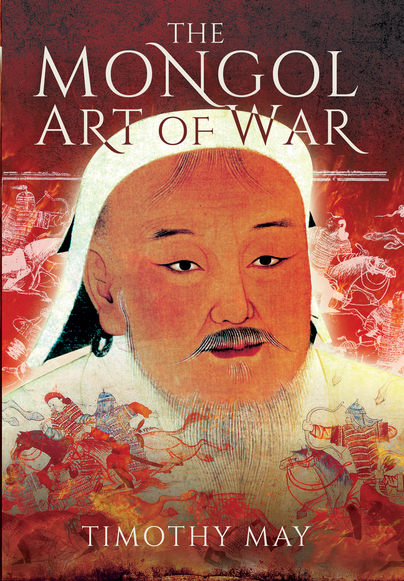 The Mongol Art of War (Paperback)

Add to Basket
You'll be £14.99 closer to your next £10.00 credit when you purchase The Mongol Art of War. What's this?
+£4 UK Delivery or free UK delivery if order is over £30
(click here for international delivery rates)

‘An authoritative study of one of history's most feared and successful armies. . . . May concludes this definitive study by tracing the Mongol legacy to modern mechanized warfare.’ Publishers Weekly

‘The Mongol Art of War reflects the state of the field in Mongol military history.  May expertly balances his narrative and analysis with little-known vignettes that bring the Mongol conquests to life.  An indispensable resource for specialists, the books is written in a lively and engaging style that make it accessible to students and the interested public alike.’ Scott C. Levi, Ohio State University

‘Enlightening, well written and informative….It has great sections on medical care and logistics, so often ignored by other authors, and really captures the feel of the nature of eastern warfare in the 13th century.’ Military Illustrated

‘The Mongol Art of War is a high-quality book. It is a useful source of information for non-specialists and it offers a valuable insight into how the Mongol culture of war contrasts with that of other nomadic peoples and with the many opponents they fought and defeated.’ Études mongoles et sibériennes, centrasiatiques et tibétaines

The Mongol armies that established the largest land empire in history, stretching across Asia and into eastern Europe, are imperfectly understood. Often they are viewed as screaming throngs of horsemen who swept over opponents by sheer force of numbers rather than as disciplined regiments that carried out planned and practised manoeuvres. In this pioneering book, Timothy May demonstrates that the Mongol military developed from a tribal levy into a complex military organization. He describes the make-up of the Mongol army from its inception to the demise of the Mongol empire, and he shows how it was the strength, quality and versatility of Mongol military organization that made them the pre-eminent warriors of their time.

An excellent primer for anyone interested in the subject.

In the thirteenth century the Mongol armies, led by Chinggis Khan and his successors, swept out of the depths of central Asia to conquer China, most of Asia, and much of Eastern Europe to form the largest contiguous empire which has ever existed.

It was probably only the death of the Khan which prevented the Mongols from conquering all of Europe, in their quest to rule the entire world.

The Mongols rarely lost a battle.

Dr Timothy May is an expert in Mongol history , and in this eminently readable book he analyses the available evidence to explain how armies of horse archers took walled cities and defeated heavily armoured European knights. Much of the history of the Mongol conquests is described, but the book is more about how and why the Mongol armies were so successful.

As usual with successful warlords, the characteristics described are intelligent and ruthless leadership, terror, adoption of new technologies, effective organisation, and disciplined soldiers.

There is finally a most interesting description of the legacy of the Mongol “art of war”, including how the tactics and high degree of mobility of the horse archer armies has been studied and copied by more modern armies, including the panzer forces of the Germans in WW2.

As expected in a book written by a respected academic, there is an extensive glossary, and extra notes for each chapter, select bibliography, and index.

This book will appeal to the general reader, as well as students of the era.

Another excellent read from Pen and Sword. Highly recommended.

The purpose of books is to educate, inform, and entertain. Timothy May's book about the Mongol Army does all three. Faultless military history.

Beyond my personal interest in the subject, I feel that this book would be an excellent reference for a wargamer wishing to start Mongol army. It covers the structure of the forces at some depth and also goes into detail about the relevant battlefield strategies.

I found the book so useful that I plan to buy the paperback edition to use for reference, to go along with the ebook that I have at present...

Dr Timothy May is Associate Dean of the College of Arts & Letters at the University of North Georgia. He is a leading specialist in the Mongol empire and nomadic empires in general. His research and publishing focuses on the Mongol conquest of the Middle East, imperial institutions and religious conversion. His publications include The Mongol Conquests in World History and Culture and Customs of Mongolia.