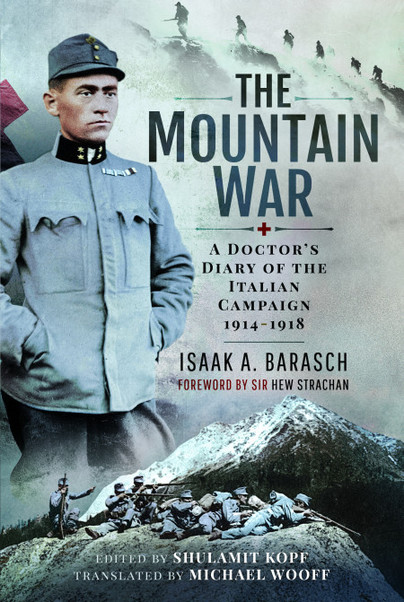 Add to Basket
Add to Wishlist
You'll be £16.00 closer to your next £10.00 credit when you purchase The Mountain War. What's this?
+£4.50 UK Delivery or free UK delivery if order is over £35
(click here for international delivery rates)

Truly, this was a illumniating read and a chance to see the front lines of war from one who has to repair the damage wrought by war. Barasch is a keen witness, detailing not only his experiences but those who suffered alongside him, be they civilian, animal or soldier.

This book does not hold back on detail nor information that helps to hold up the authors story. I have never read such a story! Of the many WW2 German Biographies and accounts I can say this is the most readable and detailed in a way that held my attention to the last. Wars filled with atrocities by both German and Soviet forces but try finding accounts that give much of the picture and not just snippets. The amount of death from that war is staggering IMO and this is the story that usually never gets told. If you are a history buff or just want to know the truth of war then IMO you cant go wrong reading this interesting and tragic tale.

''How beautifully the little birds are singing in the wood today. As if they didn't have a care in the world. They are twittering and trilling all around and do not allow themselves to be disturbed by all the ugliness that has been enacted in this vicinity for months now.''

Sometimes, you incidentally stumble upon a book that turns out to be both an incredible narration as well as a highly important work of history. ''The Mountain War'' is exactly that. The book holds the diary entries of army physician Isaak A. Barasch, a Jewish Hungarian stationed at the Italian fronts during the First World War between 1914 and 1918. It's a highly introspective, emotional, reflective and poetic work, that describes both the daily life practicalities of being an army doctor as well as the tragedy and sheer horror of being at the fronts of what would be known as one of the most horrific wars in human history.

''Hundreds of thousands of people have been torn to pieces here, crushed, blown up and mutilated. It is a great cemetery with its innumerable heroes' graves swarming everywhere with shamelessly exposed corpses. And all these things on this fair piece of ground were reveled before my very eyes in an instant. I was like someone intoxicated. I almost lost consciousness. I was as if rooted to the spot and could not stir from there. I stared and I stared. Then a shell exploded almost on top of me. I woke up.'' p.97

''Poor humanity for putting up with this! How cowardly you are! Where are all your freedom fighters? They're all phrasemongers, nothing more than that. You allow yourselves to be enslaved and led astray so easily.''

Dr. Barasch's war experience ends, maybe unsurprisingly so after reading his poignant descriptions of despair, trauma and loss of faith in the world, in a psychiatric hospital. His diary describes how depressed and humiliated he feels, being under constant care and with a total feeling of self-sacrifice. Unfortunately this is where his diary ends: he passed away at the young age of 33 of the Spanish flue during the epidemic in 1918. Two months after his death, the Hungarian empire which he served no longer existed.

It could be considered sheer luck, that dr. Barasch's entries have even survived to current day. His diaries were brought to the US by his sister in 1922: had they remained with the family in Poland, they would have been destroyed or lost during the war. The works have now been rediscovered and brought to publication by dr. Barasch's great-niece who discovered them after having been stored in a drawer for almost 100 years.

Many will be familiar with WWI diary entries, poetry or literary memoirs, such as the works from Sassoon, Remarck and Owen. Most of these works however describe the experiences of soldiers on the Western front, such as in the trenches in the fields of Flanders. Dr. Brasach's diary is unique in a way that it describes the other side of the battle: the front in the Italian mountains. In addition to the diary entries, the book provides sufficient and fascinating historical background information. These chapters, written by the British military historian Sir Hew Strachan, provided the crucial context to really appreciate the diary entries for their importance in our understanding of what really happened at the war fronts.

In conclusion, I would highly recommend this work to anyone interested in WWI, war diaries or general European history. The book is easily readable and provides plenty historical insight to put the diary into perspective. The diary is almost a work of poetry at points and overall written with astonishing introspection and emotion: raw and honest.