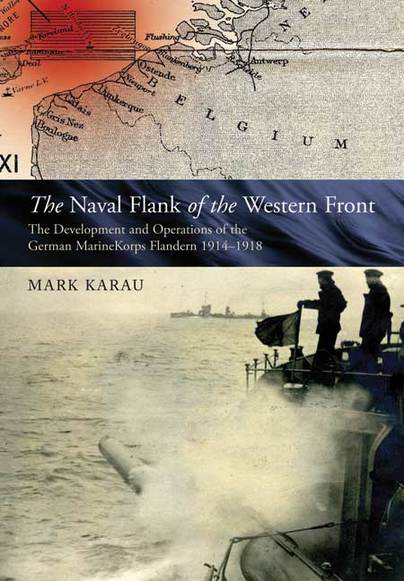 The Naval Flank of the Western Front (Paperback)

The Development & Operations of the German Marine Korps Flandern 1914 – 1918

Add to Basket
Add to Wishlist
You'll be £16.99 closer to your next £10.00 credit when you purchase The Naval Flank of the Western Front. What's this?
+£4.50 UK Delivery or free UK delivery if order is over £35
(click here for international delivery rates)

Belgium was once described as the 'dagger held at the throat of England', a collection of provinces that had long been a critical factor in British foreign policy, and the traditional concern was that Belgium, and especially the Flanders coast, would fall into the hands of the strongest continental power. In 1914, Germany's occupation of Belgium brought about the spectre of enemy ships only seventy miles from the British coast, and the coast of Flanders became, effectively, the naval flank of the Western Front.
Admiral Alfred von Tirpitz was one of the few within the German navy who recognised the strategic potential of the three ports of Ostend, Zeebrugge and Brugges; that they were closer to England than the Helgoland Bight for access by small craft, and brought Germany to within a few hours sailing of the Thames estuary. This new book tells the story of the creation, purpose, operations and career of the MarineKorps Flandern. The Flanders harbours should have allowed the German navy to strike dangerous blows at vital British traffic in the Channel and southern North Sea but the MarineKorps was unable to fulfill the great expectations of von Tirpitz. The author not only explains how the German conducted operations, but also explains how the opportunites presented by the Flemish occupation were wasted away. A significant and insightful book on an important theatre of the War

The Naval Flank is extremely well written and highly informative about a relatively unknown aspect of naval warfare.

It is a remarkably insightful book that unconsciously challenges many of the commonly regurgitated historical narratives by use of meticulous research and solid interpretation... A significant addition to our understanding of the Great War at sea.