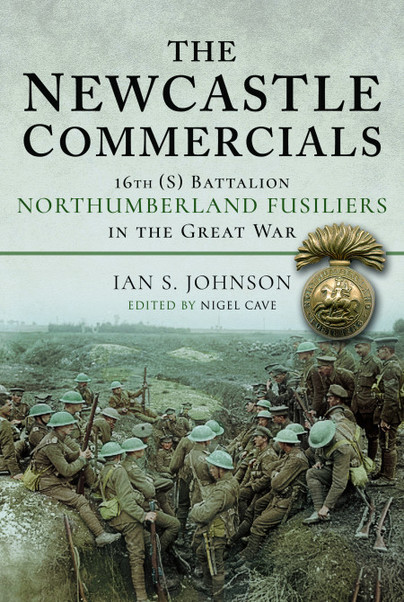 Add to Basket
Add to Wishlist
You'll be £25.00 closer to your next £10.00 credit when you purchase The Newcastle Commercials. What's this?
+£4.50 UK Delivery or free UK delivery if order is over £35
(click here for international delivery rates)

This book basically tells you the whole story of the Newcastle Commercials, 16th (S) Battalion, Northumberland Fusiliers in the Great War. We have here every single detail you could ask for here from the house to the kitchen sink thrown in too. It looks at the soldiers, the war, battles they were involved in, the stories, the achievements the honours and the history. There is so much information and detail, this book has been written as if it’s someone’s life’s work, so huge credit to the author and editor. Also in the book is a wealth of photographs, diagrams and newspaper adverts etc following the battalion which gives the book a good bit of credit. This is a hugely impressive book an awesome book to recommend to others who love their Great War history.

This is a book with real heft, the culmination of thirteen years of single-hearted research. Now with respected publisher Pen and Sword, this is a revised edition of Ian Johnson’s earlier, impressive hardback (Newcastle Battalion of World War One) published in 1914 to commemorate the centenary of the outbreak of the Great War.

Notwithstanding that point, this appears to be a model regimental history and I have no hesitation in giving it five stars.