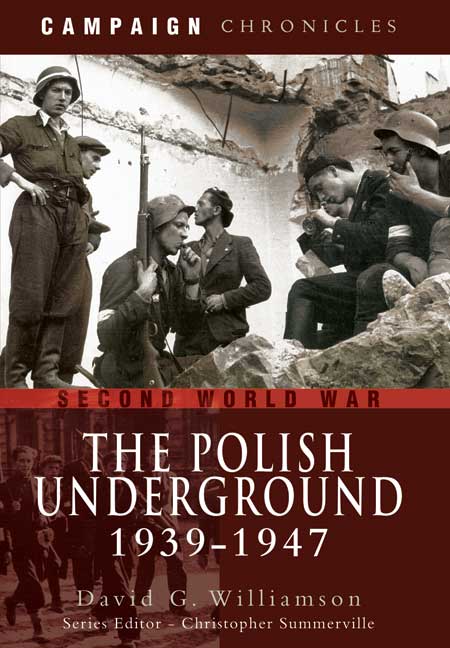 Click here for help on how to download our eBooks
Add to Basket
Add to Wishlist
You'll be £4.99 closer to your next £10.00 credit when you purchase The Polish Underground 1939-1947. What's this?
Need a currency converter? Check XE.com for live rates

The Polish partisan army, the largest in Europe, fought with extraordinary tenacity against the Wehrmacht during the Warsaw Uprising. This was the most famous manifestation of organized, large-scale, armed resistance to Hitler's rule. Yet the wider story of the Polish underground movement, which fought the Nazi and Soviet occupying powers, has rarely been told. As David Williamson demonstrates in this concise and authoritative new study, a reassessment of the actions, the impact and the legacy of Polish resistance is long overdue.

He tells a fascinating, often tragic story. The resistance movement sprang up rapidly after the shock of defeat of 1939, and the network grew and adapted as the war progressed. It took many forms – propaganda, spying, assassination, disruption, sabotage and guerrilla warfare. Many different groups – some with conflicting aims and loyalties - were involved. There were isolated partisan bands, the Jewish resistance which fought defiantly against deportation to the death camps, and the Home Army which confronted the Germans in Warsaw with such disastrous consequences in 1944. The scale and intensity of the resistance movement, which was fighting against overwhelming odds, were quite remarkable.

David Williamson's graphic account goes beyond the formal end of the Second World War, for Poland remained in a state of flux as a clandestine civil war was waged between the Communists and former members of the Home Army until the Communist regime took power in 1947. His study offers an absorbing insight into the plight of Poland during the war and into its immediate post-war history.

A fluent and authoritative account of the Underground from the creation of the Union of Armed Combat through to Freedom and Independence. The account is truly grand in its sweep. Helps to advance further the understanding of wartime Europe's largest underground force for an English-speaking audience.

The Polish Underground 1939- 1947, by David G Williamson, which tells the other side of the struggle - the fight waged by resistance forces inside occupied Poland

David Williamson's book fills an important gap, making available a relatively complete yet relatively compact easy to read history of Poland's Underground, from the beginning of World War II until the formal consolidation of communist dictatorship in 1947.
The author recounts how the Underground often had to wait . . . for supplies, for the right opportunity, for bigger geo-political considerations. While occupied Poles itched to fight the Germans, prudence often demanded holding back in the face of exponential German reprisals.
The book ends with two useful appendices: a dateline of World War II events in Poland, and capsule biographies of the main Polish figures of the times.
An animated film on the Warsaw Uprising is slated to appear. This should appeal to readers interested in fact over fiction.

The book contains many original photos rarely seen in publications. And so this is a very thorough publication, which does not overlook any events. The author describes the years following the end of WW2—a period hushed up in Poland—and so we will see a detailed picture of 1945—7. Williamson describes the largest Underground army in Europe in WW2. The book is interesting because it is written from a British perspective without Polish pathos, subjectivity and needless “Martyrology”. And so the book is to be recommended as a present to English-speaking friends, and to ourselves, as a fresh perspective on the Polish war effort. There are many similar books on the Polish market but they are rare in the UK and one must search for them with a candle.

A comprehensive study of the Polish resistance, and reassessment of its action and legacy. A quite remarkable story based on original research and eyewitness accounts. Excellent 8/10.