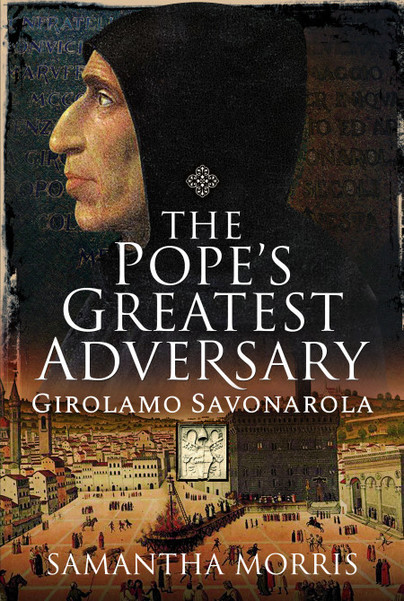 Click here for help on how to download our eBooks
Preorder
Add to Wishlist
You'll be £8.99 closer to your next £10.00 credit when you purchase The Pope’s Greatest Adversary. What's this?
Need a currency converter? Check XE.com for live rates

On 24 May 1497 Girolamo Savonarola was led out to a scaffold in the middle of the Piazza della Signoria. Crowds gathered around and watched as he was publically humiliated before being hanged and burned. But what did this man do that warranted such a horrendous death?

Born on 21 September 1458 in Ferrara, Girolamo Savonarola would join the Dominican order of friars and find his way to the city of Florence. Run by the Medici family, the city was used to opulence and fast living but when the unassuming Dominican showed up, the people were unaware that he was about to take their world by storm.

Preaching before the people of Florence to an increasingly packed out Cathedral, Savonarola came to be called a prophet. And when Charles VIII invaded Italy with his French army, one of his so called prophecies came true. It was enough for the people to sit up and take note, allowing this man to become the defacto ruler of Florence. Except Girolamo Savonarola made one very fatal mistake – he made an enemy of Alexander VI, the Borgia Pope, by preaching against his corruption and attempting to overthrow him. It would prove to be his ultimate undoing – the Pope turned the Florentines who had so loved the friar against him and he ended his days hanging above a raging inferno.

A well researched book dealing with Giralamo Savonarola and his history and his dealings with the church, the king and his people. His life has inspired others to follow him to a certain extent in their condemnation of church doctrines and the people’s slide into corruption. A thoroughly good read.

Samantha Morris’ book explores the polemical life and courageous death of the Dominican Friar Girolamo Savonarola. The book opens by introducing us to a young Savonarola at his home in Ferrara where we meet a boy who is well schooled, “very intelligent, highly strung and fond of his family”. As a young man Savonarola is said to have studied classical authors, had a brief interest in poetry, and was introduced by his grandfather to the ideas of the philosopher Thomas Aquinas for whom he would have a “lifelong adoration”. As the narrative develops, we see an older Girolamo beginning to demonstrate his determined and somewhat intractable nature by withdrawing from his studies in medicine, abandoning his family and joining an Order of Dominicans.

His ordination into the priesthood begins the most dramatic period of his life with his eventual move to Florence being the focal point of his biography. In Florence Savonarola rises in popularity through his oratory, giving powerful sermons aiming to reform the city, and banish from it the vice and corruption he saw prevalent, particularly among the elite. As a result of his efforts to purify Florence he made enemies of those with power and influence, which proved his undoing. His veiled references of corruption at the head of the church brought him into direct conflict with the then Pope, Alexander VI (Rodrigo de Borja). Efforts by the Pope to bring Savonarola to heel with repeated demands that he desists his attacks, failed to stop Girolamo from continuing his work to purge Florence and the church of malfeasance. His struggles as a reformer culminated with an eventual fall from grace and death at the hands of the church.

The book is an engaging and informative read providing a well-researched account of a lesser known but fascinating renaissance figure.

I enjoyed Morris’ book and would recommend it to others.

I thoroughly enjoyed this account of the early life, rise and ultimate downfall of the scourge of the Medici, Giralmo Savonorola. It was fluently and compellingly written and brought the events and the era to the most vivid life. What was most interesting was that Savonorola was at heart an unsympathetic character and yet the author managed to render him fascinating. I loved it.

When we think about men who challenged the Church and are known as Reformers, we tend to think of Martin Luther, Jan Hus, and John Calvin. However, a man fought against corruption in his beloved Florence who should be included in the list of great reformers. He was a Dominican monk who was not afraid to preach against sin and took aim at the most powerful men in all of Italy, including Pope Alexander VII. His sermons were so scandalous that they would lead to his demise upon a pyre in the middle of Florence. His name was Girolamo Savonarola, and his story is told in Samantha Morris’s latest biography, “The Pope’s Greatest Adversary: Girolamo Savonarola.”

I want to thank Pen and Sword Books and Net Galley for sending me a copy of this biography. I read Samantha Morris’s previous joint biography of Cesare and Lucrezia Borgia and thoroughly enjoyed it. When I heard that she was writing a new biography about a famous figure in Italian history, I was intrigued.

Girolamo Savonarola was a scholar, like his father and grandfather before him, destined to be a doctor like his grandfather. His plan for his life took a drastic turn when the girl he was fell for rejected his advances, so he decided to join the Dominican order as a friar. Talk about not taking a break-up well. Savonarola studied the Humanist teachings and incorporated them into the way he understood his faith. Of course, as a friar, he couldn’t keep his opinions to himself, so he began preaching against corruption and the vices that he saw during his travel.

Savonarola’s preaching was appealing to the people of Florence, yet it did not sit well with the leader of Florence, Lorenzo de’Medici. Lorenzo tried to silence the troublesome friar, but his son Piero de Medici took on the challenge when he passed away. Piero was nothing like his father and was overthrown as ruler of Florence by Savonarola. Of course, Savonarola was not satisfied with reforming Florence, and he decided to take on the Catholic Church itself and attack another powerful family.

Charles VII of France wanted to conquer Italy, which to the Dominican friar was a good idea, so Savonarola helped the king. This incident drew the ire of Rodrigo Borgia, also known as Pope Alexander VI, and Ludovico “Il Moro” Sforza of Milan, who just wanted the friar to shut up. Even with numerous ex-communications, Savonarola kept preaching against corruption and vices, leading to the Bonfires of the Vanities in 1497. He took artwork and writings deemed inappropriate and burned them in a humongous bonfire. A year later, on May 22, 1498, Girolamo Savonarola lost his life because of his heretic teachings.

This book has so many scandals and dynamic characters that you will forget you are reading a biography. Morris has done it yet again, and this was a brilliantly engaging and extremely well-researched biography. The way she can capture the thrilling world of 15th and 16th century Italy is astounding, and I hope she will write more about Italian history in the future. If you want a fun biography about a man who fought to reform the Catholic Church, I highly recommend you read “The Pope’s Greatest Adversary: Girolamo Savonarola” by Samantha Morris.

Samantha Morris, noted for her fine biography of the Borgia sibling Lucretzia and Cesare, turns her attention here to the firebrand cleric of the late 1400s who brought "the bonfire of the vanities" to Florence and was a precursor to Martin Luther and the Reformation movement just a couple of decades later. Savonarola has always been a controversial figure for his strident preaching against the corruption of the Catholic church and the Medicis, becoming a political as well as a religious figure. Morris give a balanced look at his life and actions, outlining other historical figures such as the Medicis and Borgias when needed to place Savonarola's life in context for casual readers. A good introduction to Savonarola and his world for adults and older students, and a valid biographical addition to any library.

The Renaissance is my thing and I will read anything even remotely connected. Loved the subject matter. Beautifully written and very accessible to the reader.

A captivating biography of one of the most decried figures of the Renaissance, the uncrowned monarch of Florence who didn't hesitate to wreak havoc on the Italian Peninsula at the end of the 15th century, the uncompromising moralist who considered himself the sword of God.
An unhinged prophet who fell prey to his own blind intransigence and saddly managed in the process to make too many enemies.
The dangerous and rather chaotic world of Florentine
politics, the unquenchable desire of conquest set in motion by Charles VIII of France and the murderous shenanigans of a Borgia pope determined to crush any religious unorthodoxy threatening his powers made Savonarola's fiery downfall unavoidable. No matter how one looks at him & his dubious legacy, he was a very unsavory anomaly during the early years of the Renaissance and a very unappealing character who got what he greatly deserved at the end. Ms. Morris gives us a compelling & engrossing portrait of a religious crank who masterfully managed his self destruction on the bonfire of his own vanities...

Fully illustrated with paintings of Savonarola and photographs of relevant locations in Florence, this is a concise and vivid slice of history. Featuring a colourful cast of characters including everyone’s favourite hedonists, the Borgias, (a singular family on which Samantha Morris has previously written very successfully), it is a solid biography of a remarkable man who still divides opinion today.

Samantha Morris has shone the light on to Savonarola, who often plays a side role to the Medici / Borgia stories, and produced a narrative that is detailed but also accessible to those who do not know him .The desperation to control and wield power through unwavering belief clearly lead to his downfall; ultimately this is engaging historical perspective on one of history’s darker characters.