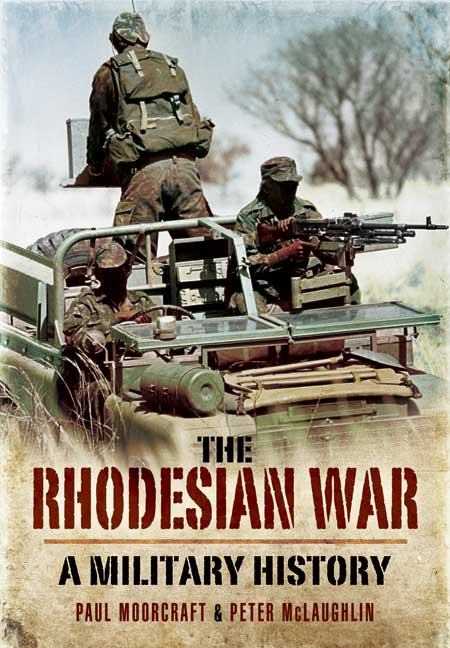 Click here for help on how to download our eBooks
Add to Basket
Add to Wishlist
You'll be £4.99 closer to your next £10.00 credit when you purchase The Rhodesian War. What's this?
Need a currency converter? Check XE.com for live rates

Fifty years on, this superb and exciting book depicts the military history of Southern Rhodesia from the first resistance to colonial rule, through the period of UDI by the Smith government to the Lancaster House agreement that transferred power. There are vivid accounts of the operations against the black nationalist 'guerillas' by the security forces and the intensity of the fighting and courage of the participants will surprise and enthrall readers. Atrocities were undoubtedly committed by both sides but equally the protagonists were playing for very high stakes.

But this is more than just a book on military operations. The Authors are able to provide expert analysis of the historical situation and examines events up to the present day, including Mugabe's operations against rival tribes and white farmers.

For a thorough work on its subject this book cannot be bettered. Essential reading for those wishing to learn more about a counter-insurgency campaign. The ingenuity of the Rhodesian military fighting against overwhelming odds and restricted by sanctions is impressive but the outcome culminating in the Lancaster House Agreement was inevitable.

The chapters are short and use clear language, although at times I had difficulty in following which guerrilla party was what, mainly due to the similar titles. It left me wondering whether the Monty Python team drew inspiration from this for their titles of political parties in “Life of Brian”. By the end of the book, however, I was more comfortable with this. Overall, I enjoyed reading this book. I found that it gave me an insight into a conflict that had parallels in other parts of the world in the superpower proxy wars of the later 20th century.

This is a remarkable book whose first edition was published in South Africa in 1982, very shortly after the events related in the book, when these were still very fresh in the actors’ minds. It has been updated and republished in 2008 and now in 2015 for the fiftieth anniversary of the Unilateral Declaration of Independence (or UDI) of what was then called Rhodesia (or even South Rhodesia).

Despite being told from the side of the Rhodesian security forces, the book is, as another reviewer mentioned, a surprisingly non-partisan and lucid analysis of their counter-insurgency operations. The authors show that despite the superior organisation and training, the undermanned, outnumbered and outgunned Rhodesian forces were fighting a losing war almost from the very beginning and explain why this was the case.

While the book is written in a lively manner and makes no mystery about the atrocities that took place on both sides, it clearly shows how both the government and the security forces lacked a clear strategy and clearly defined objectives. It also shows how their propaganda only reached the small white minority that they were fighting for, and not the huge black majority which became increasingly “politicised” over the years as the regime gradually lost control of much of the countryside.

A further merit of this book is to show to what extent Rhodesian forces and government became increasingly dependent upon the barely covert support they were receiving through and from South Africa. It also shows how the latter’s Vorster government used them, applied pressure on them and manipulated them to suit its own interests. Finally, it makes no bones of the internal divisions and – at times – rivalries that hampered their war effort, divisions that were matched by those of the Marxist and Maoist guerrilla forces and parties that were opposing them.

Above all, however, this is a book about military history, the history of a war that – at least in retrospect – seemed impossible to win for the white Rhodesian minority although it refused to accept it and believed otherwise. It is also very much topical with regards to counter-insurgencies, with the events and operations that it includes still being studied in Western war schools.

Finally, and although the authors’ tone remains factual throughout the book, the book’s last section is about “doom and gloom”. It concludes on a war than could only be lost, the emigration of the (small) white minority and the complete and disastrous mismanagement of a country that used to be portrayed as a breadbasket but has known several famines since 1980. Five stars.

In this reviewers’ opinion, this work will appeal to several groups of readers. On one level it will be of use to military personnel interested in tactics and responses to specific military situations and exigencies, while historians and war gamers will also find the information it contains useful. In addition to these special interest groups (and because it explains ‘the reasons why’), this work could be of immense value to those expatriate-Rhodesians who may still be wondering why events occurred as they did. If only for that reason, this little volume would be invaluable. That it manages to do so much more, clearly, concisely and objectively must inevitably earn it the appellation ‘Classic’. In the opinion of this reviewer, that is a designation well–deserved.

An outstanding exception to most accounts of the Rhodesian civil war…achieved impressive objectivity in concentrating on operational issues.

Anthony Verrier, author of The Road to Zimbabwe

The book is full of intrigue and plots. South African intelligence wanted to assassinate Mugabe, but there might also have been plans afoot to kill of Britain’s Prince Charles during his visit to Harare.

An insider’s perspective of the war…based on the authors’ direct experience of the conflict…It offers vivid accounts of the operations against guerrillas by security forces.

A standard text for the study of counter-insurgency warfare…A fascinating and disturbing book.

The joy of The Rhodesian War is that it is a more readable, updated, accurate and concise account than any other book on the war…The authors…served as reservists in Rhodesia and seemingly had no prejudices…This book is highly recommended.

[With] consummate skill…they have produced a very readable, absorbing volume that is both interesting and instructive…This is an excellent read and highly recommended to any student of counter-insurgency operations or post-colonial Africa.

The blunt assessments of military performances, which were so controversial when the book was first published, provided a conceptual shock therapy and have proved to be the greatest strength of the work…The authors’ refusal to pander to fashionable black or white hagiography drew fire from various quarters; but they were the greatest strength [of the first 1981 edition] and they remain a strength of The Rhodesian War now…Twenty-seven years after its first publication, The Rhodesian War remains an outstanding study of Rhodesia’s counter-insurgency, and one which, given Zimbabwe’s tortured post-independence history, remains more timely than ever.

Defence Focus, the in-house magazine of the UK Ministry of Defence.

Split into three main sections it deals with the origins of the conflict, the various protagonists, their structures, organisations and weapons, before focusing heavily on the final phase of the fifteen-year conflict.

It is good to see the book back in print.

The name Rhodesia probably won’t mean a great deal to anyone under 30. For others there might be a dim recollection of Cecil Rhodes and Africa. But for anyone growing up in the 1970s Rhodesia will be remembered for the country’s conflict with guerrilla fighters or the overthrow of minority rule, depending on your perspective.

Part of the Commonwealth until Premier Ian Smith’s Unilateral Declaration of Independence in 1965, Rhodesians were kith and kin. They trained and fought alongside the British in Malaya and Aden, using weapons procured abroad. After UDI they were on their own and held out for 15 years. According to the authors “The armed forces of Rhodesia won virtually every battle and skirmish they fought against the guerrilla armies, yet they lost the war.” How was this so?

Moorcraft and McLaughlin provide a comprehensive analysis of the organisation and tactics of both armies, their strategy, tactics and weaponry. The book includes some very useful maps, showing operational areas and infiltration routes, and reveals the scale of the challenge confronting the Rhodesians. What is also revealed is the extent of collusion – not just by South Africa but by neighbouring black African states who continued to trade with Rhodesia, while harbouring guerrilla bases. And when the Rhodesians conducted offensive operations outside their borders, the targets were the guerrilla camps, not regular forces.

The book ends with an analysis of the political situation leading to the Lancaster House Agreement and a retrospective view. There is still talk of betrayal and of feeling abandoned by the British. What will never be forgotten is the bravery, resolution and fortitude of the Rhodesian armed forces, black and white, whose “operational achievements will be studied in military colleges throughout the world.”

The book was first published in 1982 and revised by Pen & Sword in 2008. Written in the immediate aftermath of the cessation of hostilities, the book lacks first-hand accounts from any of the key players on either side. That said, many others have provided information on condition of anonymity and the book can be considered an authoritative account of the war.

The Rhodesian War will appeal to anyone interested in Africa, and the conduct of counter-insurgency operations.