In their second Visitor’s Guide to the 1916 Battle of the Somme Jon Cooksey and Jerry Murland focus on the series of secondary battles that were key stages in the five-month struggle that followed the start of the offensive on 1 July. They take the visitor – and the reader – across the entire battlefield, covering in graphic detail sites where actions took place that are almost as famous as the Somme itself in the history of the First World War, including Mametz Wood, High Wood, Deville Wood, Guillemont, Ginchy, Pozieres and Flers. They also provide tours of the less-well-known but equally interesting sites which played important parts in the offensive as a whole.

In a sequence of routes that can be walked, biked or driven they describe what happened in each place, identify the units involved, highlight the experience and exploits of individual soldiers, and point out the notable sights, monuments and cemeteries.

This highly illustrated guidebook is essential reading for visitors who wish to enhance their understanding of the Battle of the Somme and the war on the Western Front. It is also the ideal companion volume to The First Day of the Somme: Gommecourt to Maricourt by the same authors.

Sadly, Jon Cooksey did not live to see this book published. Nevertheless, his prodigous output will ensure his name will be remembered and his efforts acknowledged for years to come. This partnership with Jerry Murland has resulted in a very useful guide to the blood-soaked fields of the Somme. Mametz Wood, High Wood, Delville Wood, Guillemont, Ginchy... they're all here, along with a timetable of the battles, usually fruitelss and costly.

You're in good hands with Messrs Cooksey and Murland and the instructions are illustrative and easy to follow. Buy a copy, and stuff it into your Barbour pocket. Stout hearts recommended.

Good maps, clear details & with the keen eye of the late Jon Cooksey, this makes it a must-have guidebook to the Somme.

I haven’t visited the Somme for a decade or so, but I would feel confident in using this as my primary guide (along with the recommended Michelin maps). This is a worthy, up-to-date successor to the Major & Mrs Holt series of battlefield guides, and the next time I’m allowed to go to the Somme (By either SWMBO or the Government) , I will be taking this and its companion volume with me.

The books description of routes caters for those in cars, but equally for those who may be cycling. The book isn't too bulky either, and it will easily slot into backpack, or full suitcase, should you be struggling for room on your travels, when that is possible. Equally, acts as the perfect guide book to plan your attempted visit to this area. Also, if you already have a copy of 'The First Day of the Somme: Gommecourt to Maricourt, by the same authors, both books compliment each other wonderfully.

These visitor guide books are great, they seem to have such great detail, comprehensive information and a very wide selection of photographs. The only trouble is that I’m not able to go over to France to visit these sites, so I can’t actually say this is this and that is right etc. But with the books being written by such good historians who certainly know their stuff, it does feel so accurate and second only to being there. I would certainly recommend these books for their high quality and historical information.

I am a huge fan of these battlefield guides, prepared by knowledgable authors who knioow their subject, but which allow for the individual battlefield visitor to make their own schedule and devote the time to their own specific interest rather than being confined by the schedule of a guided tour. Excellent value for money and a really well prepared guide.

As expected from Cooksey and Murland this is a concise yet well defined guide to the Somme after July 1st 1916. To those of us who walk the battlefield I sense that whilst the events of the first day are rightly centre stage in most visits, the later battles hold at least as much value to the visitor. Guillemont alone is a tactical masterclass in the role of terrain in determining the outcome of battle and moving away from the cemetery and better understanding how the geography unlocked the German defence of Guillemont is well supported by this book. The other walks are equally good. Recommended. 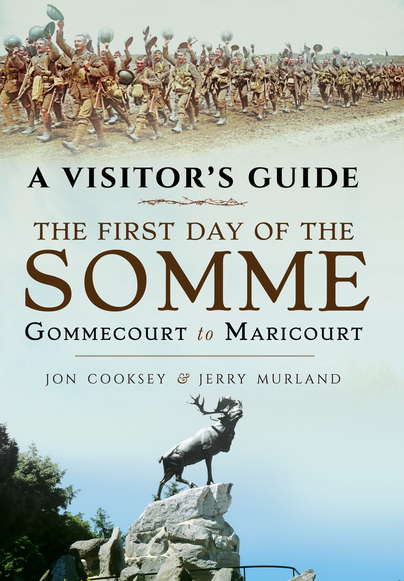 A Visitor's Guide: The First Day of the Somme Gommecourt to Maricourt (Paperback)

Many guidebooks cover the Somme offensive in 1916, the five-month struggle that has come to be seen as one of the defining episodes in the history of the fighting on the Western Front during the First World War. But no previous guide has concentrated on the first day, 1 July 1916, when the British Army suffered around 60,000 casualties. That is why, on the centenary of that great battle, this new volume from Pen & Sword is so timely. In a series of tours that can be walked, biked or driven, expert authors Jon Cooksey and Jerry Murland take the visitor along the eighteen-mile front line that was…

Click here to buy both titles for £31.98
More titles by Jon Cooksey