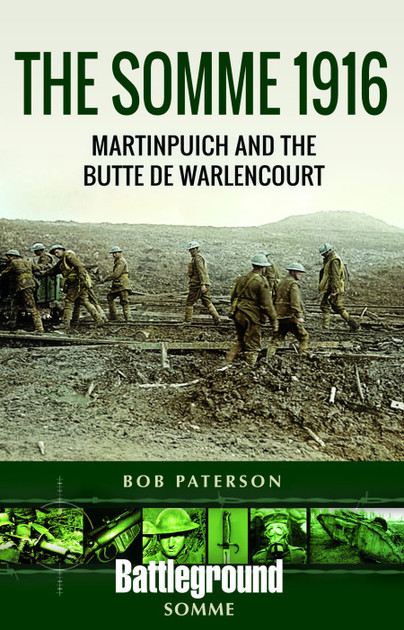 Much of the popular attention on the Battle of the Somme 1916 is focussed on the first day of the infantry assault, 1st July, when such high hopes were dashed and British casualties ran into the tens of thousands. However, the Somme was a battle that lasted over twenty weeks, running well into the autumn.

This book is concerned with fighting south of the famous Albert-Bapaume road from mid September to the official end of the battle. The coverage includes Martinpuich, the hamlet of Eaucourt l'Abbaye, Le Sars and that strange topographical feature the Butte de Warlencourt.

The action starts with the major British attack of 15 September 1916, which enjoyed some success and which included the first use of tanks. The book takes up the story from the fall of Martinpuich and follows the British as they inched their way north eastwards to Le Sars and Eaucourt l'Abbaye. This was gruelling warfare, fought in fast deteriorating weather conditions and in the face of ever increasing volumes of artillery fire: the mud was almost as much the enemy of both sides as the weight of lead and iron fired at them.

The Butte de Warlencourt has come to have an almost iconic status. This rather insignificant hillock, almost certainly a burial mound of the Romano-Gallic period, marks the point at which the battle officially ceased along the Albert-Bapaume road. For days before the battle ended both sides tussled to secure its possession, numerous limited attacks taking place over devastated, utterly water logged and featureless ground. Indeed it was the 'emptiness' of the area that made the Butte of such significance, a fearsome, solitary landmark standing out against a backdrop of desolation. It was the focus of the fighting in the area for almost six weeks.

As well as the customary walks, essential to an understanding of the confused fighting in the area, there is a long car tour, covering many less visited parts of the battlefield to the east and north of the Butte and which places it firmly in the context of the battle. Charles Carrington, who wrote one of the classic memoirs of the war, was not alone amongst those who fought here when he commented that, 'the Butte de Warlencourt terrified us'.


This is another fine addition to this series of Battleground guides. While guided coach tours are very popular, you are tied to a schedule so there are many of us who like to get in the car and 'do it yourselves' with the aid of a book like this and then control your own individual schedule.

Another nice book added to the series looks good and feels good with the excellently written history, supported by great photos, maps, diagrams and information. This particular book focuses on the end of the Battle of the Somme and is a handy guide to have with you whilst travelling around those battlegrounds. Another excellent book for the Battleground series.

Continuing the high standard of this series, this book delivers a very good overview of the battleground coupled with the usual supporting images, maps and source extracts. An essential aid to better understanding the ground.

Bob Paterson was born and educated in Dundee. He gained an M.A. in British First World War Studies at the University of Birmingham some 33 years after he took his first degree in 1979.

In 2008 he established the Tayside Branch of the Western Front Association and went on to serve on the Association’s Executive Committee as European Officer and later as Chairman. During this period he personally led the refurbishment of the Butte de Warlencourt, which at that time was owned by the W.F.A.

Bob and his wife Julia purchased and renovated a house in the village of Morval on the Somme battlefields and where they normally spend a considerable period over the summer and autumn months. During the Battle of the Somme, Morval fell to the allies in the Battle of Morval on 25 September 1916.

Bob has been married to Julia for over forty years and they have two grown up children who both work and live in Scotland. Apart from a passion for the First World War - especially the areas around the Butte de Warlencourt, Combles and also south of the River Somme where the French fought - Bob is a keen photographer and golfer; and he and his wife have been season ticket holders at an English Premier League football team for a number of years.