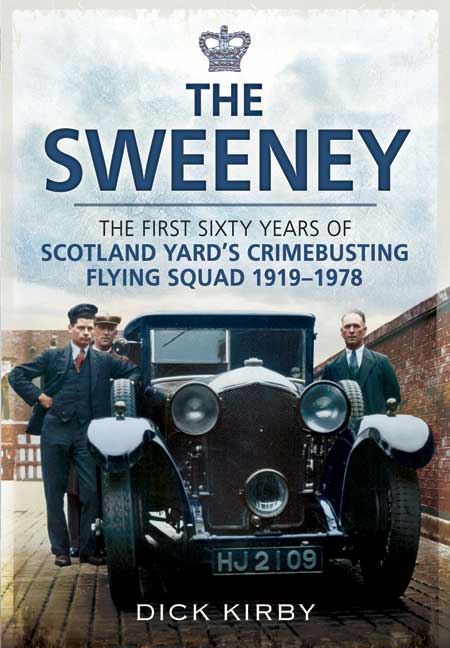 As seen in the Daily Mirror (8/9/2019): Met's "Flying Squad" is 100 years old but few remember the Battle of Heathrow where the Sweeney spectacularly cracked bullion gang

You'll be £4.99 closer to your next £10.00 credit when you purchase The Sweeney: The First Sixty Years of Scotland Yard's Crimebusting. What's this?
Need a currency converter? Check XE.com for live rates

The story of sixty years of Scotland Yard's top crime-busting department has been written over a twenty year period by a former detective who spent over eight years with the Flying Squad – The Sweeney.

The meticulous research by the author has uncovered files never before released by the Yard and he has amassed the tales of bravery and top-notch investigations, carried out by the Squad officers of yesteryear.

The book commences with the dramatic account of the daring gold bullion and jewellery raid in 1948 by a gang of well-organised criminals from the newly-opened Heathrow Airport. The Flying Squad were lying in wait for them and what happened next, was described by a judge at the Old Bailey as, 'The Battle of Heathrow'.

The Flying Squad was formed to stem the tide of lawlessness, following the First World War; from humble beginnings using horse-drawn wagons, they swiftly progressed to high-speed cars. Taking on the might of the Racetrack Gangs, armed robbers and smash & grab raiders, the Squad was brought to the forefront of the public's attention.

The war years, the secret post-war Ghost Squad, the horse-doping scandals, the Great Train Robbery, the Bank of America robbery, Supergrasses and corruption are recounted with its scrupulous attention to detail. The book is filled with thrilling, amusing and always compelling anecdotes from the men who were there. It was the Flying Squad who inspired the popular TV series. This book reveals what life was really like in The Sweeney.


Dick Kirby has maintained his great story telling, attention to detail and research and ability to keep the reader engaged in the stories told from start to finish. Thanks, Dick, I look forward to getting another of your offerings to read!

This riveting new book is crammed with thrilling real-life investigations involving the most hardened criminals and gangs.

The Sweeney: The First Sixty Years of Scotland Yard’s Crimebusting Flying Squad 1919-1978, by Dick Kirby, is the first book about the Flying Squad which goes beyond their towering operational achievements during their first sixty years.

Tribute is paid to senior officers, many of whose exploits led to them becoming household names.

The Flying Squad, Scotland Yard's top crime - busting department have been on some of the most courageous, ingenious and at times unconventional investigations in Britain, unconventional as this was the time before political correctness, using any lead they could, at times coming down hard on informants and not doing things by the book. This book delves into the first sixty years of the flying squad showing an accurate reflection and account of the impact that this department had on major crime and the legendary arrests that they accomplished.

The book divulges that the squad was created after the First World War, and from humble beginnings during the war years using horse drawn carts, they soon became a force to be reckoned with when they upgraded to high speed cars. The book accounts there daring arrest at London Airport in 1948 of a gang of organized criminals who were planning on stealing a gold bullion and jewellery shipment, this became known as The Battle of Heathrow. Also told with great detail is the Great Train Robbery, the Bank of America robbery and the squads taking on the might of the Racetrack gangs. These cases caught the publics attention and even more so when a much popular television show was made showing there exploits gained them a huge reputation.

The author Dick Kirby, a former flying squad member for twenty six years, has gathered together real life tales with dramatic action told with a real eye for detail by a man who knows first hand what it is was like to be part of this major legendary squad in British police history.

Author Dick Kirby , joined the Metropolitan Police Force in 1967 and was described by a judge at the Old Bailey as one of the best detectives at Scotland Yard. He himself a member of the flying squad for over eight years has uncovered files never before released by the Yard , which reveal the courageous , ingenious and sometimes unconventional methods used to investigate and capture the most notorious criminals in the first sixty years of the Yard's flying squad department. Exciting and action packed, the book is crammed with thrilling tales of real life investigation and the dramatic actions used against some of the world's most hardened criminals before 21st century political correctness was introduced . A must read for those interested in the history and inner workings of the British Police force , Kirby covers the humble beginnings of the flying squad right through the war years into the 1970's , and explores the corruption of some of the biggest cases , for example the Great Train robbery and Bank of America robbery with scrupulous attention to detail. This record documents the unshakeable dedication and bravery of all those involved but gives an honest and realistic portrayal of the squad revealing everything 'warts and all'. Its honest and at times shocking portrayal of the British Flying squad both inspires and amuses whilst simultaneously documents the rise and growth of the British Police force.

Dick's book The Sweeney is full of characters, car chases and criminals. From the beginning, he lets the action tell the story. He follows the Squad's ups and downs from it's horse drawn beginnings in 1919 to it's recovery from corruption scandals of the 1970s.

Dick details its success in stamping out the criminals cashing in on the popularity of horse-racing: everything from dodgy bookmakers to raffle ticket scams and pickpockets working the crowds.

Former detective remembers the first 60 years of one of the Met’s most storied outfits in latest book...

An experienced former Flying Squad detective-turned author has been reflecting on the history and achievements of his former unit in his latest book.

The book is certainly a meticulously researched document, full of colour, and a fitting tribute to those who have served with the squad over the years.

Dick Kirby spent half of his 26-year career in the Met with the Serious Crime Squad or the Flying Squad so its exploits and lore are in his bones.

This thoroughly researched and enjoyable history, crammed with vivid descriptions of long-forgotten police operations, races along like an Invicta tourer at full throttle.

When people think of The Sweeney they no doubt picture John Thaw in the 70's TV show recklessly policing the street with a firm but fair hand yet not many would believe the show was based on real events. The Sweeney begins with a thrilling description of gold bullion heist poised to be a success only none of the criminal gang could have prepared for what was waiting for them. The book details every aspect of The Flying Squad from their humble formation after World War One to their part in The Great Train Robbery. With eight years first hand experience in the Flying Squad himself Dick Kirby is appropriately qualified as the author and through a combination of historical backgrounding and pulse raising tales the enduring image of The Sweeney will undoubtedly remain.

THE SWEENEY is that rare and masterful book that informs and entertains from start to finish. It is compulsively readable and exciting. The chapter on The Great Train Robbery, "the robbery that will never go away," is by itself worth the cover price.

Congratulations to you and Dick Kirby!

The sweeney is bursting with superb and ingenious investigational techniques and the author wastes no time in demonstrating them.
Dick Kirby jumps straight in with the first big crimebust, Heathrow 1948 where the airports own security system was too limited to deal with such a sophisticated gang and needed the assistance of Scotland yards elite crime-busting unit, the Flying Squad.
The book shows amazing attention to detail and makes the readers experience even more intense providing information from dates, times and places to names, hair color and transport.
The Flying Squad was formed shortly after the First World War and from humble beginnings using horse-drawn weapons they rapidly progressed to high speed cars.
Containing crimes such as the Great Train Robbery, the Bank Of America Robbery and the secret post-war Ghost Squad The Sweeney is crammed with dramatic action against the most hardened criminals and gangs before "Political correctness" and "Targets" had ever been heard of.