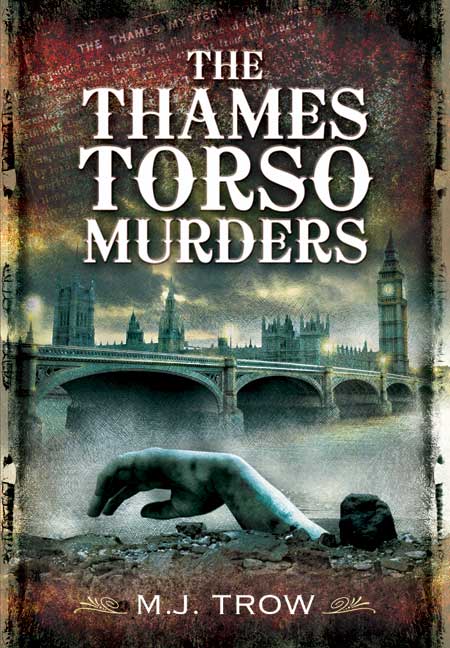 Click here for help on how to download our eBooks
Add to Basket
Add to Wishlist
You'll be £4.99 closer to your next £10.00 credit when you purchase The Thames Torso Murders. What's this?
Need a currency converter? Check XE.com for live rates

Dismembered corpses are discovered scattered along the banks of the river Thames, a calculating clinical multiple murderer is on the loose, and the London police have no inkling of the killer's identity – and, more than a century later, they still don't. In this, M.J. Trow's latest reinvestigation of a bizarre and brutal serial killing, he delves deep into the appalling facts of the case, into the futile police investigations, and into the dark history of late Victorian London.
The incredible criminal career of the Thames torso murderer has gripped readers and historians ever since he committed his crimes in the 1870s and 1880s. The case poses as many questions as the even more notorious killings of Jack the Ripper. How, over a period of fifteen years, did the Thames murderer get away with a succession of monstrous and sensational misdeeds? And what sort of perverted character was he, why did he take such risks, why did he kill again and again?

Throughout history there have been many high profile multiple murder cases that have captured the attention of people around the world and with the rise of popular television series such as CSI and Wire in the Blood, interest in out of the ordinary murders has soared. Ranging from the notorious Jack the Ripper to Rose and Fred West, these cases have gripped people of all ages and had them wondering why someone set out to do something so gruesome. There is a certain fascination in the macabre, a wonderment in the execution of such precise crimes and the way that these people go undetected for such a long time, even more so those chilling cases that go unsolved. The Thames torso murders is one such case and this book traverses a dark world of mystery and intrigue. Working with Professor Laurence Alison, a leading forensic psychologist, Trow manages to present us with one of the most interesting cases from the late 1800s. One of the most fascinating aspects of this case was the lack of motive and Trow takes us through each of the irrefutably gory murders aided by photographs and diagrams to help us gain knowledge about what occurred throughout the 1870-80s. With facts intersected with extracts from popular author's works, this book is a captivating journey through the sordid world of London's underbelly perfect for all who have an interest in Scotland Yard and the dark past of England's capital city.

During the 1870s and the 1880s a bizarre serial killer with a fascination for the river Thames committed a series of brutal murders that rivaled and brought many questions as Jack the Ripper had. For fifteen years this killer went uncaught and was never caught and his identity is still a mystery today as it was then. This book asks the questions what were the killers motives, why did he commit the same style of killing each time, why dump the bodies in this location and how did he get away with these crimes.

M.J. Trow has written many books on true crime, such as the best selling book Jack the Ripper: Quest for a Killer and many historical books as well such as books on Boudica and Vlad the Impaler, and here he has taken on an investigation, with the help of leading forensic psychologist Professor Laurence Alison, to throw new light and to open up new theories on this baffling, bizarre, unsolved case.

The 'torso murders' took place in late nineteenth century London . Eight known victims were dismembered at the hands of a serial killer whose identity was not -and is still not - known. Whilst the case is not as famous today as the Jack the Ripper murders, they were and still are just as terrifying and unnerving. Trow considers the 'torso murders' from a historian's perspective, overlaying this with knowledge of forensic psychology (the 'leading forensic psychologist' Laurence Alison' provides the forward), and a contemporary viewpoint. Trow takes a look each murder and at past investigations, pulling the information together in order to offer potential insights and interpretations. Moreover, the author provides the social and historical context in which the torso murderer roamed. Victorian London could be dark and gruesome, yet at the same time, from a contemporary perspective, it is also fascinating. This essence is captured within Trow's gripping book, and it makes for a very interesting and compelling read.

Unsolved murders haunt London's history, but few are quite as chilling as the sadistic and convoluted killings by an unknown killer, who can be known only as the 'Thames Torso Murderer'. The dismembered body parts were discovered along the banks of the Thames periodically in the 1870s and 1880s, and to this day the identity of the cold, calculating character that committed these most brutal of murders is still unknown. Historian M. J. Trow recovers the facts of the case and the police's futile attempts to solve it, and at the same time we are allowed a chilling insight into the Victorian context that produced this mind. How he got away with it and why he continued to kill in such a flagrant manner are questions raised by Trow, and an image of a highly calculating and methodical, rather than crazed and psychotic, individual begins to emerge through the narrative. What mistakes did the police make? Can any lessons be learnt from such a successful evasion of the police on how to understand other serial killers? These are questions a reader may be left wondering, as you become utterly engrossed in and equally repulsed by a world of darkness, mystery and perversion.