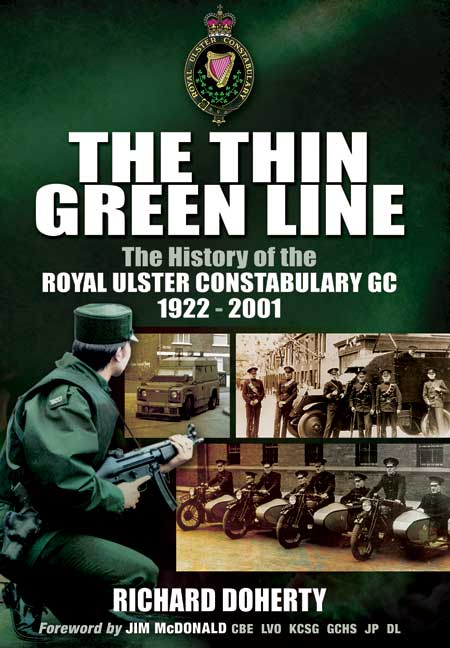 The History of the Royal Ulster Constabulary GC 1922-2001

Click here for help on how to download our eBooks
Add to Basket
Add to Wishlist
You'll be £4.99 closer to your next £10.00 credit when you purchase The Thin Green Line. What's this?
Need a currency converter? Check XE.com for live rates

The Royal Ulster Constabulary was born in June 1922 in the traumatic aftermath of the secession of the Irish Free State from the United Kingdom. This new force inherited the ethos, uniform and badges of the Royal Irish Constabulary. Over the next eighty years the RUC served Northern Ireland's people though war and peace and, from 1969, against a backdrop of sectarian insurrection when it was a principal target. Although the RUC had encountered terrorism before, this was on a new scale and the next twenty-five years saw some 3,000 fatalities, a figure which included over 300 RUC members.

During this most testing period, men and women officers, as well as working with the Army and other agencies in an unremitting campaign against both loyalist and republican terror groups, provided normal policing cover. Where once a lone officer had patrolled a beat, the same role had now to be performed by a number of armed officers, often in armoured vehicles and always subject to terrorist attack. The RUC truly provided the thin green line‚ that prevented a descent into civil war and unimaginable chaos.

In 1999 Her Majesty Queen Elizabeth II announced that the RUC's outstanding contribution was to be recognised by the award of the George Cross, echoing the recognition of the island of Malta's courage during the Second World War. To symbolise the Force's sacrifice, courage and endurance, Her Majesty presented the Cross in April 2000 to a young officer who had lost his legs in a terrorist attack in which a female colleague had been murdered.

For political reasons the RUC GC was subsumed into the Police Service of Northern Ireland in November 2001 so bringing to an end an era of service to the community.

If ever an organisation deserved its history to be recorded, it is the RUC and The Thin Green Line – The History of the Royal Ulster Constabulary GC 1922-2001 is a most welcome and important memorial.


This book is an extensively researched, comprehensive, and authoritative history of the RUC, especially in the years following the intensification of the conflict in Northern Ireland in 1969. How effective was the RUC? The author observes that as a policing force the RUC “discharged its responsibilities well, providing an effective deterrent against crime and having an excellent detection rate, so much so that even in the worst years of the ‘troubles’ the crime clearance rate in Northern Ireland was higher than that of many forces in Great Britain”.

Richard Doherty is one of Ireland’s leading military history authors with more than a dozen monographs to his credit.

Article: 'Why the republican narrative of nationalist hostility to policing is historical revisionism which must be confronted' as featured by

This is not an impartial book. Perhaps it’s not even an objective book but then I don’t think that was the aim. This is the story of the Royal Ulster Constabulary, as told by Richard Doherty, one of its former members. Or to cite the full title, Royal Ulster Constabulary GC, the award of the George Cross being for “exceptional recognition of the outstanding contribution made by the RUC to peace in Northern Ireland.”

Indeed “The Troubles” dominate the book although the opening chapters provide a brief summary of the emergence of the RUC from the Royal Irish Constabulary following partition. It is often overlooked that while the RUC was in the front line of anti-terrorist operations, it was first and foremost a normal police force, conducting the everyday tasks of its mainland counterparts. And it was while undertaking these “normal” events that so many police officers lost their lives: shot in the back while comforting a female involved in a traffic collision, delivering a false bereavement message to be lured into an ambush and so on. Page after page relates to the death and injury of officers, some only recently joined while others such as a 61 year old with 42 years of service murdered in his driveway. And among other tragedies one officer was shot dead after visiting his wife and new born son in hospital.

The life of an RUC officer was anything but normal. Unable to hang washing on the line lest the colour if their shirt reveal their occupation, mindful of what their children could say even to their own friends. Members of the RUC remained targets for the rest of their lives.

And the RUC was attacked from both ends of the political/sectarian divide. Loyalist terrorists were responsible for the deaths of both the first male and female officers to be killed. Many had to move out of “loyalist” estates, with at least one later being killed in his new home by the IRA. The RUC’s commitment to impartiality found favour with neither side.

The author is especially critical of the SDLP and John Hume in particular for failing to adequately support the force. A succession of Chief Constables are also put under the microscope, with Sir John Hermon the most highly regarded and Hugh Annesley not even deemed worthy of a mention in the Index.

There are legions of books on the history of Northern Ireland and The Troubles. This book will appeal to anyone who wants to know what it was like to be part of the “thin green line” and the price that its members paid – and continue to pay.