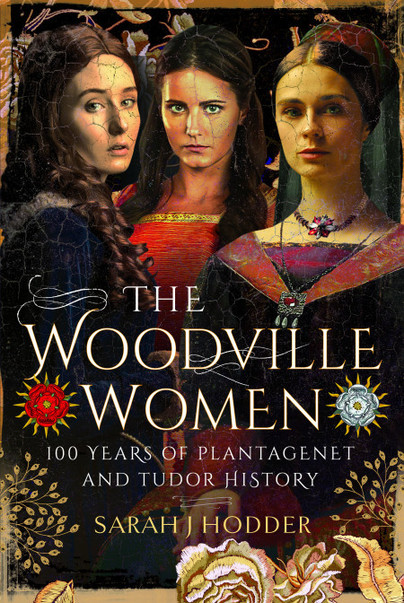 100 Years of Plantagenet and Tudor History

Preorder
Add to Wishlist
You'll be £16.00 closer to your next £10.00 credit when you purchase The Woodville Women. What's this?
+£4.50 UK Delivery or free UK delivery if order is over £40
(click here for international delivery rates)

Elizabeth Woodville, queen to Edward IV and mother of the Princes in the Tower.

Elizabeth of York, daughter of Elizabeth Woodville and the first Tudor queen of England.

Elizabeth Grey, granddaughter of Elizabeth Woodville and Countess of Kildare, whose life both in England and across the Irish sea was closely entwined with the Tudor Court.

This is the tale of three generations of women, linked by their name, Elizabeth, and by their family relationship. The story begins in the reign of the great Plantagenet Kings with the life of Elizabeth Woodville and ends in the reign of perhaps England’s most famous dynasty, that of the Tudor kings and queens. Through the life of Elizabeth of York, the first Tudor queen and Elizabeth Grey, cousin to Henry VIII and Mary Tudor, we explore the Tudor court and its dealings with the Earls of Kildare.

From the birth of our first Elizabeth to the death of our last, these three women lived through wars and coronations, births and deaths, celebration and tragedy and between them they experienced some of the most exciting and troubled times in English history. Mother, daughter and granddaughter: individually they each have their own fascinating story to tell; together their combined stories take us on a journey through a century of English life.

This is an informative and very well-researched book about the influential Woodville women. especially the three Elizabeths. All of them had a voice behind the throne. of England. The facts have been woven into a well-described narrative. of one hundred years. It is a compelling read from the myth of Melusine to royalty, and dynasty.

Hodder digs deep into the record to go back multiple generations of Elizabeth Woodville's family, on both the paternal and maternal line, showing how she wasn't as low born as her enemies tried to make her out to be. Hodder tracks her rise from minor nobility to queen, and fairly paints a portrait of a woman who worked hard to try and help those she loved as well as having to deal with so much criticisms.

As we see her story play out we learn more and more about her eldest daughter, Elizabeth of York, who then goes on to be queen of England herself, thanks largely in part to her own mother's finagling. Hodder rejects previous portrayals of Elizabeth of York as powerless and in a cold marriage, showing just how close she and Henry VII grew and what she was able to do for the people around her.

And then, as we get into the reign of Henry VIII, Hodder explores the often overlooked life of Elizabeth Grey, granddaughter of Elizabeth Woodville and niece to Elizabeth of York. Due to this Elizabeth's marriage to the Earl of Kildare, she gets sucked into the violent bog of Irish politics, but she never just goes along with events, always working hard to protect her family and to try and keep them safe.

Hodder does a good job finding specifics about the lives of each woman, and when the record is sparse, she takes a wider view at what most women of the era were going through, showing both the lives of these specific women, but also showing how England changed in so many ways over these three generations. A fascinating study of the era and of this family.

Sarah J Hodder began her career as a production manager for Shire Publications, a unique niche publisher that introduced her to an eclectic mix of subjects and encouraged her already well-founded love of books. After leaving Shire to raise her daughter, she was able to explore and develop her passion for history, particularly medieval and Tudor.