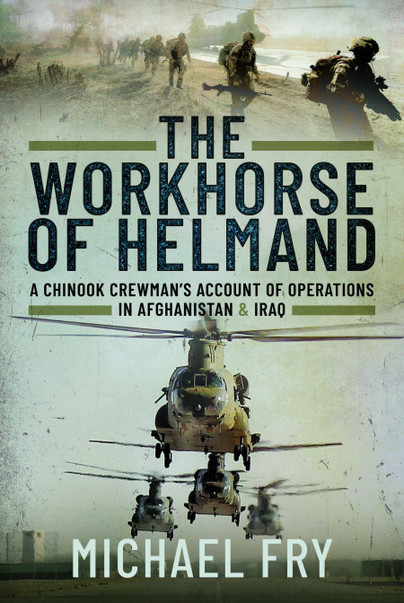 The Workhorse of Helmand (Hardback)

A Chinook Crewman's Account of Operations in Afghanistan and Iraq

Preorder
Add to Wishlist
You'll be £20.00 closer to your next £10.00 credit when you purchase The Workhorse of Helmand. What's this?
+£4.50 UK Delivery or free UK delivery if order is over £40
(click here for international delivery rates)

As a RAF Chinook crewman, Mick Fry’s exposure to Afghanistan spanned over 10 years and countless deployments, from watching 9/11 unfold in Australia, leaving the deck of HMS Ocean off the coast of Pakistan under the cover of darkness all the way through numerous fighting seasons and the chaos of Helmand Province.

The Chinook helicopter was the workhorse of the British Military operations in Afghanistan, and the crews from RAF Odiham were confronted by their own mortality on an almost daily basis as they worked tirelessly and skilfully to support the troops on the ground.

Whether it was taking part in air assault missions against a determined enemy, or extracting casualties from the battlefield under fire, and in a life or death race against time, Mick witnessed both the best and worst of humanity on a daily basis.

His story is both gripping and confronting. It takes the reader on a journey through combat operations in both Iraq and Afghanistan. The Author paints a gritty picture of repeated operational deployments, balancing harrowing scenes and the ever present threat of death with the humour and camaraderie of comrades and the exhilaration of surviving Taliban RPG’s and AK47 fire.

Born in New Zealand Mick Fry was bought up in the United Kingdom. He joined the RAF in 1988 serving in Germany and Cyprus. In 1999 he converted to rotary wing at RAF Odiham, the home of the UK Chinook Force.

After a tour in The Balkans he was sent on exchange to Australia in 2001. Returning to the UK in 2002 he was deployed to HMS Illustrious. In the North Arabian Sea before moving to Bagram supporting 3 Commando Brigade.

Over the next ten years he saw repeated action flying in Chinooks, the most targeted of all aircraft, in Afghanistan and Iraq.

Since retiring from the RAF in 2011 Mick has held a range of senior commercial aviation positions worldwide. He has a Master’s degree from City University, London and lives in Far North Queensland.