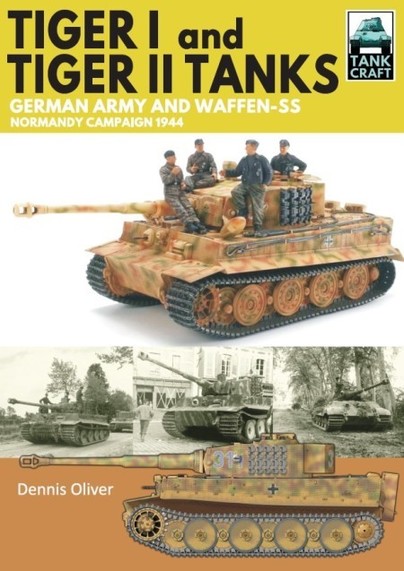 Add to Basket
Add to Wishlist
You'll be £16.99 closer to your next £10.00 credit when you purchase Tank Craft 25: Tiger I & Tiger II Tanks. What's this?
+£4.50 UK Delivery or free UK delivery if order is over £35
(click here for international delivery rates)

In spite of the relatively small numbers involved, the Tiger I and Tiger II tanks of the German Army and Waffen-SS heavy Panzer formations played a central role in resisting the Allied invasion of France in the summer of 1944. British and American tank crews found to their dismay that the Tigers could survive numerous hits while a single round from one of their 88mm guns was enough to penetrate the strongest armour. In his latest book in the TankCraft series Dennis Oliver uses archive photographs and painstakingly researched, exquisitely presented colour illustrations to examine the part these powerful tanks played in the Normandy battles and also the units that operated them. As with previous titles, a large part of this book showcases available model kits and aftermarket products and accessories, complemented by a gallery of skillfully constructed and painted models. Descriptions of technical details as well as modifications introduced during production and in the field are also provided giving the modeller all the information and knowledge required to recreate authentic miniature representations of the Panthers that fought in the fields and hedgerows of Normandy during the summer of 1944.

The color plates are a terrific centerpiece of the book, and I heartily recommend any of these volumes by Pen & Sword to modelers.

I suspect modelers who like to build Tigers will like this volume as much as this former modeler did.

Another fine addition to the series by author Dennis Oliver, with content not just for the armour historian but also a first-class reference for armour modellers, whichever is your preferred scale. The TankCraft series is a real boon to AFV modellers, and produced at a reasonable price too.

The book does a fair job as a stand alone offering, but its value is increased when combined with the other titles covering these specific tanks.

You understand that I liked this book very much and that I would be discussing about Tiger I and II for hours, but the space for a review must necessarily be short. I recommend this book by expert Dennis Oliver, which in 64 pages, manages to include a huge number of information, photos, diagrams, profiles, which will delight any fan of WWII armored vehicles.

Once again, the Tank Craft series treats us to excellent technical information, a good narrative and summary of its service in Normandy and for the modeller all one could ask in creating authentic models. The author has a track history (pun intended) in producing these guides that are a fusion of history and craft.