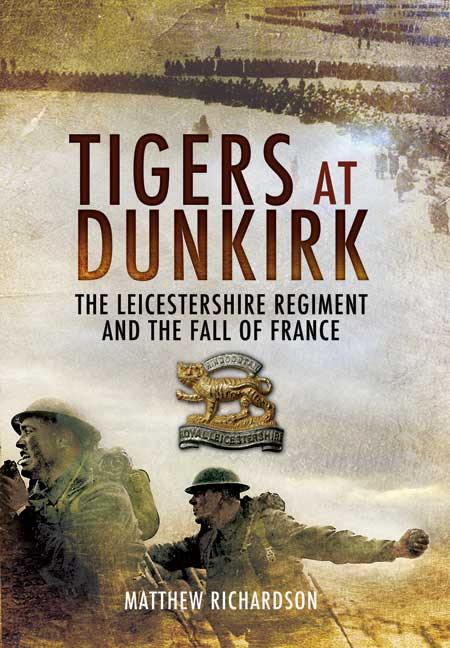 The Leicestershire Regiment and the Fall of France

Add to Basket
Add to Wishlist
You'll be £12.00 closer to your next £10.00 credit when you purchase Tigers at Dunkirk. What's this?
+£4.50 UK Delivery or free UK delivery if order is over £35
(click here for international delivery rates)

In this compelling new study of the disastrous 1940 campaign in France and Flanders, Matthew Richardson reconstructs in vivid detail the British army’s defeat as it was experienced by the soldiers of a single battalion, the 2nd/5th Leicesters. These men typified the ill-equipped, under-trained British battalions that faced the blitzkrieg and the might of Hitler's legions. They were thrown into a series of desperate, one-sided engagements that resulted in a humiliating retreat, then evacuation from Dunkirk. This is their story.

Matthew Richardson is curator of social history at Manx National Heritage and was formerly assistant keeper of the Liddle Collection at the University of Leeds. He has a long-term interest in military history and research, focusing in particular on the First and Second World Wars and on the history of the Leicestershire Regiment. In addition to writing many magazine articles on military history, he has published the following books: The Tigers and Fighting Tigers. He is currently working on 1914: Clash of Empires.

This book covers the 2/5th Battalion in the campaign of 1940 using a wide range of sources including information from the diminishing number of survivors. As part of 46 Division, quickly transformed from a labour force to a fighting force, albeit inexperienced and poorly equipped, the 2/5th was to be expended so that the more efficient formations could escape. They went up to the fighting in French trains, very much as the predecessors did in 1914/5. All the chaos of a retreat is described graphically; they were never in one place for more than a day until they halted at the La Bassee canal in May and in their final stand, with only 25 rounds each they were overwhelmed and either killed or taken prisoner. A few of them escaped. The author uses survivors' accounts and the PoW de-briefing records at the National Archive in WO 344. Their experiences were terrible, poor food, hard work, boredom and sometimes brutal treatment, most of the 2/5th were sent to camps in German occupied Poland - Stalag XXA, XXIB and XXID. After four years and after the Russian advance they were subjected to the dreadful forced march deep into Germany. This book completes a worthy record of the acts and sufferings of these brave Tigers.

As Remembrance Sunday and the services at war memorials across the county approach once again, our thoughts inevitably turn to those young men and women who did not return from the conflicts of the 20th century.

To many of us, the lists of names carved on our local memorial will remain merely names. Perhaps the surnames will have the ring of familiarity about them, but nothing more. Digging deeper into the stories behind these names can be a rewarding but also deeply moving exercise.
Putting details such as dates and places - and sometimes even a photograph - to a name can bridge the void of the decades which now lie between us and those young men who laid down their lives so long ago to protect our freedom.
I am grateful to Mr Matthew Richardson for sending me details of his recently-published book which features some of these men and women.
He says: "Having written three books about the service and sacrifice of the Royal Leicestershire Regiment in the world wards, I could not fail to have been deeply moved by the stories of heroism and sacrifice which I have encountered during my research.
"My most recent book, Tigers at Dunkirk, was published in May to coincide with the 70th anniversary of that ill-fated campaign. It contains the stories of young men like Freddie Diaper, of Leicester, who was killed in action and who today has no known grave, being commemorated on the Dunkirk Memorial to the missing. He left a young widow, Nellie, in Leicester. The two had been married only a few months.
"Second Lieutenant Charlie Hughes, of Oadby had lost his father in the First World War, and shortly after arriving in France himself confided in another officer that he did not believe he would ever see England again either. He, too, was killed and it defies human emotion not to feel a surge of anguish when thinking of his mother, who had not only lost her husband in war but her son also.
"One cannot fail to be touched by the stories of men like Hugh Pope who was killed in action in May 1940, aged just 22. He was one of the brightest young officers. Prior to the war he had been studying theology after graduating from Cambridge. Before that he had been at Oakham School, where he had captained the cricket XI.
"Despite his youth he had showed enormous potential and was congratulated by a general for his efficient and confident manner.
"Second Lieutenant John Emerton was only 20 when he died. His obituary stated: 'He was a most enthusiastic young platoon officer and extremely popular with all ranks. His quiet but cheerful disposition and his growing efficiency held out great hopes for the future.'
"Just a few of the thousands who sacrificed so much on our behalf."

This final offering in Matthew Richardson's Fighing Tigers trilogy focuses on the exploits of the 2nd/5th Leicesters and the role they played in the disastrous 1940 campaign. The battalion, initially sent to France as a labour force, was thrown against the German Blitzkrieg and woefully ill-equipped and under-trained, many of its men fell in combat or were captured. The plight of the Tigers is presented in vivid detail thanks to the author's use of supporting first-hand accounts and personal testimonies, which graphically illustrate the total chaos and confusion surrounding the Dunkirk evacuation and life for many as prisoners of war.