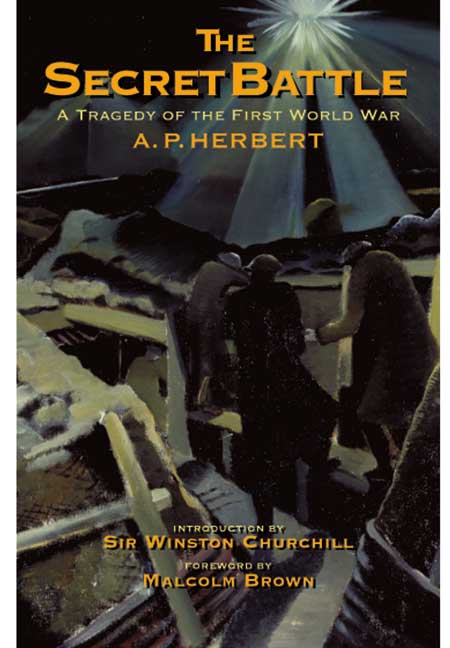 A Tragedy of the First World War

By A P Herbert, Introduction by Sir William Churchill

Add to Basket
Add to Wishlist
You'll be £14.99 closer to your next £10.00 credit when you purchase The Secret Battle. What's this?
+£4.50 UK Delivery or free UK delivery if order is over £35
(click here for international delivery rates)

In The Secret Battle A. P. Herbert tells the story of an idealistic, young officer called Harry Penrose. First in Gallipoli, then in the trenches of France, he is tested and brought to breaking point as he battles to retain the ideals of military glory, duty and courage amidst the daily grinding miseries of the trenches.

It lays bare the real horrors of the First World War without melodrama, or sensationalism. The author tells his tale not with indignant protest, but with a sad resignation making this a haunting and deeply moving book.

Despite the glowing accolades it would later receive, when it was first published in 1919, just a few months after the Armistice, a war-weary public were not ready for a book that so fundamentally challenged the assumptions and beliefs on which the war had been fought. Because of that it never quite gained the status it really deserved and deserves.

Ninety years on it has lost none of its freshness, relevance and poignancy. It remains an incredibly touching story of what might happen to a gallant soldier borne down by the stresses of war and challenges traditional perceptions of what constitutes courage. It also raises important questions over the justice or otherwise of executions in the First World War: a question that is now more than ever, an open matter of debate and contention.

This edition includes an Introduction by Winston Churchill and a new Foreword by Malcolm Brown who was a great admirer of Herbert.