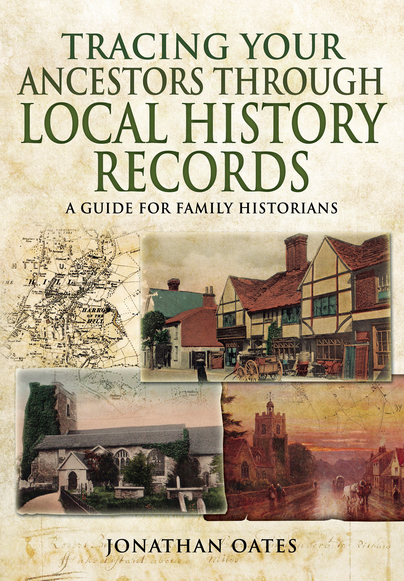 Click here for help on how to download our eBooks
Add to Basket
Add to Wishlist
You'll be £4.99 closer to your next £10.00 credit when you purchase Tracing Your Ancestors Through Local History Records. What's this?
Need a currency converter? Check XE.com for live rates

Family history should reveal more than facts and dates, lists of names and places – it should bring ancestors alive in the context of their times and the surroundings they knew – and research into local history records is one of the most rewarding ways of gaining this kind of insight into their world. That is why Jonathan Oates’s detailed introduction to these records is such a useful tool for anyone who is trying to piece together a portrait of family members from the past.

In a series of concise and informative chapters he looks at the origins and importance of local history from the sixteenth century onwards and at the principal archives – national and local, those kept by government, councils, boroughs, museums, parishes, schools and clubs. He also explains how books, photographs and other illustrations, newspapers, maps, directories, and a range of other resources can be accessed and interpreted and how they can help to fill a gap in your knowledge.

As well as describing how these records were compiled, he highlights their limitations and the possible pitfalls of using them, and he suggests how they can be combined to build up a picture of an individual, a family and the place and time in which they lived.

Jonathan Oates’s detailed introduction to these records is such a useful tool for anyone who is trying to piece together a portrait of family members from the past.

This is a book for local historians as much as those tracing families. Older books, such as those by F.G. Emmison and W.G. Hoskins, cover similar ground, but this book is a good up to date introduction to local history records for anyone embarking on research into local or family history.

If you wish to gain an insight into the real lives of your ancestors then this is the book for you.

A good general overview to the subject and the author is not afraid to point out problems in the coverage and warn of possibly misleading information.

The reader is given important guidance on how to get the maximum value from these resources.
I do not believe anything is gained by simply compiling lists of names; local history is a fascinating topic in itself. I recommend this book.

This new trusty Pen & Sword guide for family historians urges the more experienced researchers among us to delve deep into local history.
This is a great guide for more advanced family historians looking to move on to the next stage in the study of their family going back centuries.

Following an introductory brief history of England, the author moves on to the origins and importance of local history from the 16th Century onwards. He outlines the principal categories of national and local archives and explains how and where a variety of sources can be accessed as well as giving guidance to how those records can be interpreted.

Many of the sources discussed will be familiar to family historians to some degree, but this book offers a fresh angle on using them to learn more away from mere name-hunting.

There's plenty of sound and sensible advice, presented in an informal and relaxed style. While some readers might expect more factual information and less generalised description, the book is intended to give ideas and get you thinking about exploring your ancestors' world.

It is an introductory guide, to be read before you set off on that exploration.