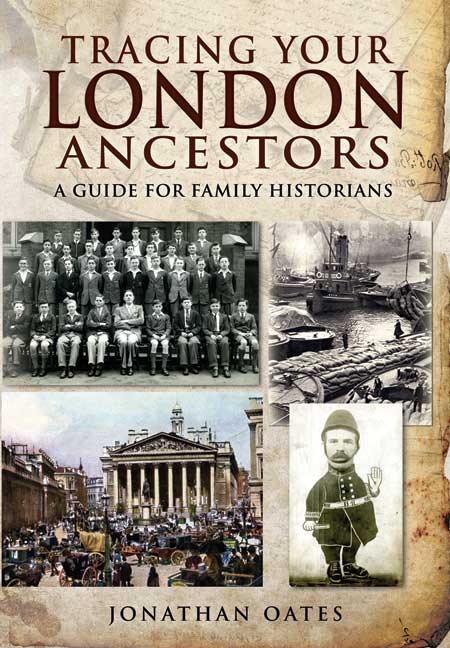 Click here for help on how to download our eBooks
Add to Basket
Add to Wishlist
You'll be £4.99 closer to your next £10.00 credit when you purchase Tracing Your London Ancestors. What's this?
Need a currency converter? Check XE.com for live rates

London is a key site for family historians. Many researchers, seeking to trace their ancestry back through the generations, will find their trail leads to London or through it. Yet, despite the burgeoning interest in genealogy and the importance of London in so many life stories, few previous books have explored the city’s history or provided guidance on the research resources family historians can use to discover the life of a London ancestor. This is the purpose of Jonathan Oates’s invaluable handbook.

In a series of short, information-packed chapters he describes the principal record offices, archives, libraries and other sources researchers can go to, and shows how Londoners can be tracked through censuses, registers and directories over the last 500 years. Then he explores key aspects of London’s history from a family historian’s point of view. Crime, religion and education - and the body of evidence associated with them - are covered, as is the historical trail left by taxation, health, welfare, work and business. He looks also at the military and wartime records available in the city, and at the records of immigrant communities who have had such a notable impact on the development of the capital.

Each section introduces the reader to the relevant sources, indicates where they can be found, and offers essential advice on how this information can be used to piece together the lives of distant and not-so-distant relatives.

The book is divided into twelve chapters each covering a broad topic worthy of research. Subjects range from the capital's historical timeline through to religion, education and crime. Each chapter gives a broad-brush stroke summary of the subject and also provides specific details regarding what types of research material are available and where such items can be found. A bibliography is also provided which lists places and contact details of many of the archives and libraries where the recommended materials are located.

With the extent and details of archives and their records, this book would also be a worthy reference work for inclusion in any genealogist's own library.

Friends of The National Archives.

Researching London ancestry is complex but this comprehensive handbook interspersed with examples and illustrations will help you unravel the threads and point you in the right direction.

Each section introduces the reader to the relevant sources, indicates where they can be found, and offers essential advice on how this information can be used to piece together the lives of distant and not-so-distant relatives

Tracing Your London Ancestors is a handy guide through the complexities of public records, from those of obscure taxes that were levied on everything from ships to hearths, through those to private schools and the police, to the archives of hospitals and asylums. There are pointers to where you can find apprenticeships records, for instance, for the Merchant Navy from 1823, as well as for places like the Royal Naval Asylum at Greenwich. Pull all these different aspects together and you could potentially build up quite a comprehensive picture of how Londoners in your family lived.

Janis Blower from The Shields Gazette

London has dominated Britain for the last 2,000 years. Even in late Roman times it's believed to have had a hefty population of around 50,000 people, while now it's somewhere between seven and 14 million, depending on where you decide London ends. For this book, Jonathan Oates has opted to include Greater London, the historic London and Middlesex, and neighbouring parts of Essex, Surrey and Kent.

All of this means that people can lay claim to London ancestors, even if they only arrived at the city from elsewhere in search of a better life. Oates is the borough archivist for Ealing, with several books to his name on London's criminal past.

He begins with a survey of London's history to remind us of how its status has grown over those last two millennia, and how it has been a cultural melting pot for much of that time – even in 1800, many of its one million inhabitants were from ireland, France, and indeed the rest of the world.

When exploring records for family historians, Oates first discusses 'lists of Londoners' – the census, of course, and trade and phone directories, but also poll books and London specific resources such as the Middlesex Registry of Deeds. The latter fills 12,000 index volumes at the London Metropolitan Archives with details of property owners from the early 18th to the early 20th centuries.

As befits a metropolis riddled with problems created by population density, and an author interested in crime, the next section explored records relating to the police, courts and crime and punishment. A key resource is the excellent Old Bailey Online site.

To redeem us all after the darker side of London, Oates turns next to the city's ecclesiastical records, including nonconformism and a brief mention of sources for London's Jewish population. many other areas are covered in this comprehensive volume, from education to leisure, occupations to wartime, along with separate chapters about medieval London and immigration. there's also a handy section on researching house history in the capital.

This comprehensive look at finding your London ancestors is written by the Archivist of the London Borough of Hounslow, whose vast experience can help us find those elusive ancestors who settled, or just passed through London. As well as a necessary look at the history of london, there are chapters on the various types of records and where they are held: Government or religious; education or business; military or wartime; all these records are described together with advice on how this information can be used to illuminate the lives of our ancestors. Divided into short chapters, this is a book which will assist you in attempting to navigate the minefield of London records.

It starts with a brief history of London, and continues with an account of lists of Londoners that are easy to access, such as the census, directories and electoral registers. It continues thematically through subjects such as crime, business, education and house history. This wide-ranging book will be of most use to the family historian who as completed most of his or her family history and wants to fill in details about the lives of specific individuals.

Many people have been born in, lived in or passed through London, perhaps about one fifth of the population. With this vast number there is sure to be someone in your family tree who is included.
Dr Jonathan Oates is the Ealing Borough archivist and his book explores the city’s history and provides guidance on the resources available to the family historian. In information packed chapters he looks at the information available in the Greater London area ranging from censuses and directories to taxation of hearths, windows and Poll taxes.
The ecclesiastic records cover CofE, nonconformists, Jews and Catholics whilst education records include schools, universities and apprenticeships.
The details available on medieval London through to London under attack during the World War are also covered.
With the vast area of the capital the social and cultural aspects are large, including ill- health, orphanages, the poor and crime.
A chapter on Businesses and Working London points the way to professions, shopkeepers, Livery Companies, the Police and London Transport.
Perhaps you are descended from incomers to the UK who settled in London, these immigrants cover all nationalities including those who arrived and served in the military.
When you have discovered your relations you may then be able to find the history of the houses and streets where they lived.
The extensive bibliography gives a listing of family history societies and Record Offices in and around Greater London.

For many of us, tracing our ancestors involves painstakingly searching through the birth, marriage and death records widely available, usually getting little more from them than dates, occupations and a few names.

But a new book shows you how to put the leaves on the branches of your family tree, giving you ideas on how to build up the life stories behind the names, while learning more about London's history in the process.

Tracing your London Ancestors: A Guide for Family Historians is designed to put ancestral research in a historical perspective.

The book explains how you can make use of London's many institutions that hold records - some dating as far back as the Middle Ages, for example those related to work, health, school, military service, even immigration and religion and the taxes people paid.