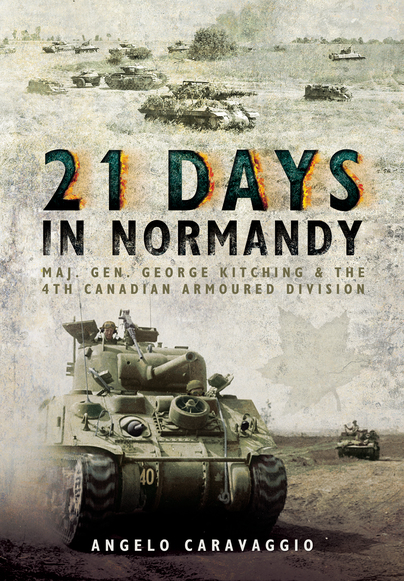 Click here for help on how to download our eBooks
Add to Basket
Add to Wishlist
You'll be £4.99 closer to your next £10.00 credit when you purchase Twenty-one Days in Normandy. What's this?
Need a currency converter? Check XE.com for live rates

The Canadian 4th armoured division crossed the Channel in July 1944 to reinforce the invading forces and assist in the Allied attempts to breakout of the Normandy beachhead around. They were heavily engaged in Operation Totalize and Operation Tractable but have been criticized for their failure to close the ‘Falaise gap’ and complete the entrapment of withdrawing German forces. Their commander, Major General George Kitching, was relieved of his command after just 21 days in action.
Angelo Caravaggio re-examines the division’s performance and particularly that of its leadership. Using new information, he establishes that, despite entering battle for the first time during one of the most challenging phases of Allied operations in August 1944, the 4th Armoured Division, under Kitching’s leadership proved resilient and adaptive in overcoming the volatile and unpredictable nature of warfare in Normandy. The combat operations of August 1944 transformed the division into a battle-hardened combat formation that would later distinguish itself through its ability to generate a sustained drive across France out of the chaos and destruction of the Normandy battles.

In my humble opinion this book is a masterpiece of a study into one formation in a short time period. It is analytical, objective, and comprehensive. I recommend it highly to any student of the campaign in Normandy in mid-1944, armoured formations in general, or the Canadian Army in the Second World War.

The author uses new information to demonstrate the unit did show flexibility and adapted to the battlefield quickly, despite being thrown into battle during one of the Norman Campaign's critical phases. His arguments are detailed and based upon in-depth research, and the book has many detailed maps to help the reader follow the action.

I recommend that the reader perseveres with this book. You may or may not agree with the conclusions but a passionate case is made and this contributes to the literature on Normandy.

Angelo Caravaggio book, with maps and photographs, is a detailed account of the controversial failure to close the Falaise Gap which led to Major General Kitching being relieved of his command.

21 Days in Normandy could appeal to the harder core military history enthusiasts who appreciate detailed acronyms, comprehensive explanations of commanders' duties, extensive tables of order and equipment, copies of actual orders and information of similar ilk...

To all of whom this appeals, I think you will tremendously enjoy this book!

A carefully researched review of the 21 days from landing for the
Canadian 4th Division. The author has presented the facts and
offered logical conclusions, righting some of the injustices done
to the Canadians. An absorbing account and very much recommended.

Lt. Col (retired) Caravaggio served in the Canadian Armed Forces for 34 years. and was the first Director of the Centre for National Security Studies.He was appointed to the Order of Military Merit (Officer) in 1999 and is an alumnus of the Governor General’s Canadian Leadership Conference 2004.
Dr Caravaggio has a Ph. D in Canadian history from Wilfrid Laurier University, a Masters Degree in War Studies, and a Masters Degree in Defence Studies from the Royal Military College of Canada. His article ‘The Attack at Taranto: Tactical Success Operational Failure’ was the 2007 Edward S. Miller Award winner for best historical essay published in the U.S. Naval War College Review.