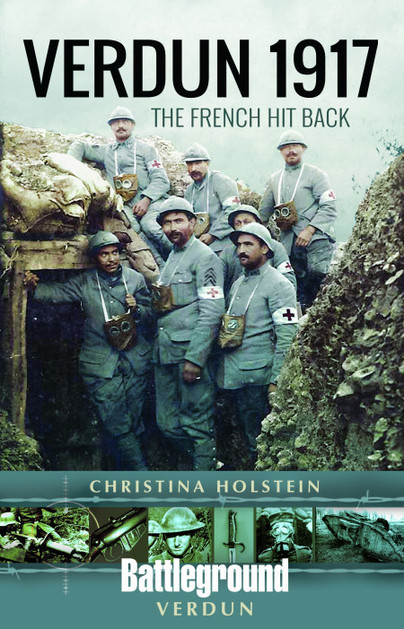 
She has written an engaging and assured text sprinkled liberally with observations from the men who fought there. Those first-hand accounts illuminate the action, and in many cases, the horror of Verdun on both sides. Holstein’s book works well even for us stay-at-home readers who just want to know more about Verdun, and I think it would be indispensable for those who would visit the battlefield and surrounding countryside.

As an introductory book to Verdun, I think it is superb and a real eye-opener, the photographs, maps, personal accounts and histories bring it to life, it’s certainly one I would wholeheartedly recommend to anyone with a growing interest – with the caveat that you really need to be aware of the significance of Verdun to both sides prior to 1916 and to read up on the events of 1916 for the subject of this book to be fully appreciated. I have certainly enjoyed reading it, as a ‘refresher’, it has jogged my memory to the many trips I have made to the area and I will certainly be taking this book with me when I revisit.

One always thinks of the Battle of Verdun as one in which the French were heavily defeated. Christina Holstein sets the record straight in this terrific account of the continuing offensive in 1917.

This book will tell you all about the battle at Verdun, the lead up, the actual battle, the aftermath and the connotations of the event on both sides. The book then takes you on 4 tours of the battlefield, all very good reading and I can only think would be further improved by being there in person.This book is obviously aimed at those that enjoy visiting battlefield tours, but I would say that it also appeals to the newbie, the regular WWI fan and the in-depth professional. There is literally something valuable for everyone whatever your knowledge. A very fine 5 star rating, everyone get out and buy it if you want to learn good concrete information.