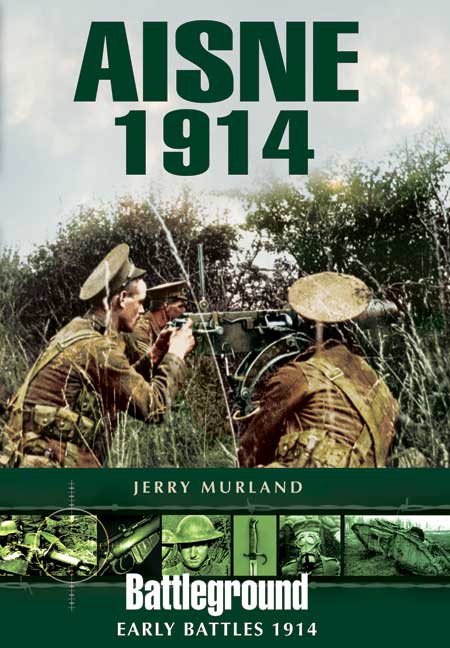 Click here for help on how to download our eBooks
Add to Basket
Add to Wishlist
You'll be £4.99 closer to your next £10.00 credit when you purchase Aisne 1914. What's this?
Need a currency converter? Check XE.com for live rates

The 1914 Battle of the Aisne, officially from 12 – 15 September, came about as a result of the German retirement from the Battle of the Marne, which took place further south as the huge conscript armies of France and Germany jostled for position almost within sight of Paris. By the time the British arrived on the Aisne the battle line stretched some 150 miles from Noyon in the west to Verdun in the east and it was only along a tiny fifteen mile sector in the middle that the The British Expeditionary Force was engaged. However, it fought bitter engagements, which took place in difficult conditions and casualties were heavy. The Aisne fighting was the final attempt by the allies to follow through from the success of the Marne. It also marked the successful establishment by the Germans of a sound defensive line on this part of the front.

For too long Britain's story of fighting in 1914 has been one bookended with tales of heroism from the Battle of Mons the month before and last stands at Ypres in November. But author Jerry Murland is almost single-handedly redressing this perspective, first with his 2012 book Battle on the Aisne 1914, swiftly followed by this Battleground Europe edition Aisne 1914... The book is broken down into easily digested chapters...Given the paucity of guides on these actions, this is another welcome addition in a rapidly-expanding Battleground Europe series.

[Includes] not just the fighting, but a detailed section on how to visit the battlefield and the cemeteries and memorials.

A recent trip over the water to France went so well I find myself inspired to look for new places to visit and this book hits the spot. These Battleground books are so accessible and make planning a trip easier. Even when we are talking of very well trodden ground, they always have something to bolster knowledge and inspire you to get to a particular farm track or churchyard.

The format is pretty much standard for the series and it all works. I like the brief looks at other conflicts reminding us of events when the panzers rolled through in 1940 and references to Napoleon. One thing I always enjoy from these books are the stories of the men who were there, often accompanied by superb photographs or those overly dramatised illustrations of heroism which appeared in the British media, often without any similarity to real events. Jerry Murland knows his ground and his subject and makes the most of a relatively brief period of battle by showing us just how much there is to see of it. Sections on cemeteries and memorials and features from later battles all add to the mix.

With 2014 fast approaching, we can expect a flood of books commemorating the efforts of the BEF in 1914, and Jerry Murland’s analysis of one of the lesser known battles of the First World War will be a welcome addition to most military enthusiasts’ libraries. As the book’s blurb acknowledges, this title is the latest in a series of over one hundred Battleground titles and like its companions it follows a tried and tested format: an analysis of the events followed by some suggested tours to take in the battlegrounds; key events and personalities picked out for the intrepid traveller. The book is published in a handy-enough format to be able to sit inconspicuously on a bookshelf or be slipped into a Barbour (or these days, Super-Dry) coat pocket.

This will suit the family historian who is looking to see what Great Uncle Alf did (and they’ll know that Great Uncle Alf was in the 4th Division because they’ll have seen in the appendix that the 2nd Seaforths were part of the that Division). For those who simply want to read a chronological account of the battle and re-live it as it unfolded, this format may not suit them as well. But on the scale of things these are small matters. The book is well illustrated and the tour itineraries are detailed and helpful. A good bibliography rounds off a thoroughly researched topic.

Another work from the prodigious pen of Jerry Murland, following on the heels of his "Retreat and reaguard" which followed the fortunes of the British Expeditionary Force in its withdrawal from Mons to the River Marne in 1914, "Battle on the Aisne 1914" picks up the story from there. The author's narrative is clear, easy to read and engaging. I do not think that students of the battle will find much that is genuinely new here in terms of the basic facts, but the stories, quotes and anecdotes bring life to the proceedings and reveal weaknesses in British structure, tactics and command. There are a number of simple and clear maps to help navigate what for some readers will be new territory (which, by the way, is well worth a visit) and a good selection of photographs by way of illustration. Well worth a read.

This is a well-written and informative history and guide which will allow visitors to the battlefields to gain the most from their visit to this area.