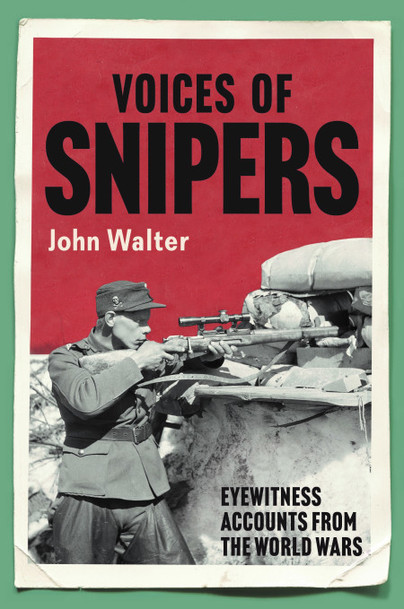 Eyewitness Accounts from the World Wars

Add to Basket
Add to Wishlist
You'll be £20.00 closer to your next £10.00 credit when you purchase Voices of Snipers. What's this?
+£4.50 UK Delivery or free UK delivery if order is over £40
(click here for international delivery rates)

Based on an incredible breadth of first-hand testimony, this is a unique collection of eyewitness accounts from World War I and II.

John Walter draws on meticulous research and the reminiscences of more than fifty snipers, tracing their journeys from recruitment and selection through training, combat and its aftermath to reveal a surprising commonality of experience, even across nationalities.

Laying bare the triumphs and brutalities of sniping, the personalities and psychologies of those who found themselves doing it and considering the immediate implications on both the sniper and the wider theatre of war, this is a fascinating, detailed insight into frontline combat and the experience of sharpshooting in its historical context.

The book is appended with the complete diary of Russian sniper Roza Shanina, who is still celebrated today for her remarkable shooting accuracy and astonishing bravery. Her diary offers a rare insight into the complexities of what it was to be both a sniper and a woman on the frontline.

Another very well researched and put together book, which gives a very detailed insight into
the training, deployment and actions of snipers over both world wars.

Plenty of detail from training manuals and detail of diaries kept by the snipers themselves.