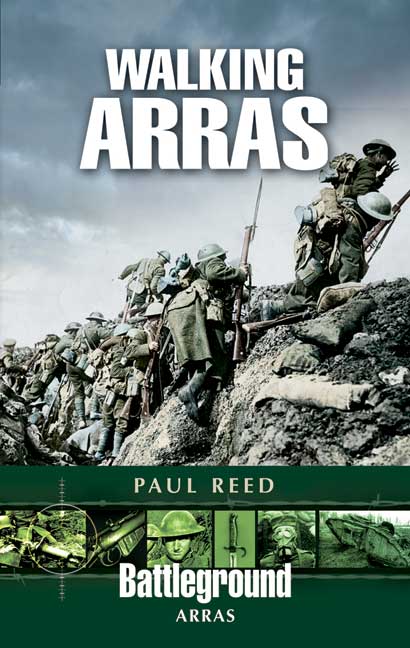 Add to Basket
Add to Wishlist
You'll be £12.99 closer to your next £10.00 credit when you purchase Walking Arras. What's this?
+£4.50 UK Delivery or free UK delivery if order is over £40
(click here for international delivery rates)

Walking Arras marks the final volume in a trilogy of walking books about the British sector of the Western Front. Paul Reed once more takes us over paths trodden by men who were asked to make a huge ' and, for all too many, the ultimate ' sacrifice. The Battle of Arras falls between the Somme and Third Ypres; it marked the first British attempt to storm the Hindenburg Line defences, and the first use of lessons learned from the events of 1916. But it remains a forgotten part of the Western Front. It also remains one of the great killing battles of the Great War, with such a high fatal casualty rate that a soldier's chances of surviving Arras were much slimmer than even the Somme or Passchendaele. Most soldiers who served in the Great War served at Arras at some point; it was a name very much in the consciousness of the survivors of the Great War. Ninety years later, while there has been development at Arras, it is still an impressive battlefield and one worthy of the attention of any Great War enthusiast. This book will give a lead in seeing the ground connected with the fighting in 1917. Making a slight departure from the style of the previous two walking books, the chapters look at the historical background of an area and then separately describe a walk; with supplementary notes about the associated cemeteries in that region.

There are the usual tips on travel and the important reminder about the dangers that still exist on the Western Front with unexploded grenades, artillery shells and other explosive devices. Arras is a lovely place to visit, and these days there are parts of the underground tunnels that are open for the public to visit, quite fascinating to see. One other thing that helps the battlefield visitor these days is the speed of travel enabled by the Channel Tunnel, making 1- or 2-day trips from the UK to the region so much easier.

All in all, this is a good and reliable guide with walks which are well planned and the supporting information excellent.