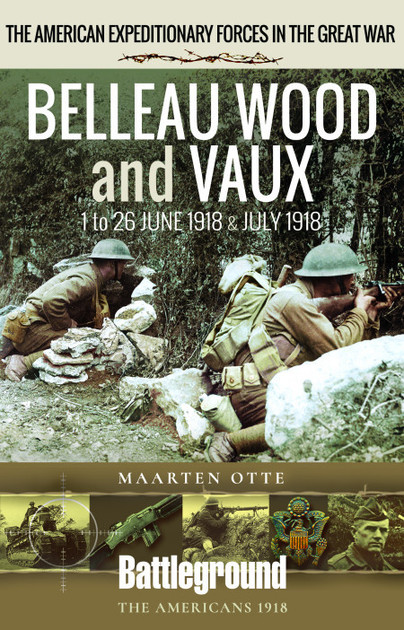 Preorder
Add to Wishlist
You'll be £11.99 closer to your next £10.00 credit when you purchase Belleau Wood and Vaux. What's this?
+£4.50 UK Delivery or free UK delivery if order is over £35
(click here for international delivery rates)

The Battle of Belleau Wood has a prominent place in the history of the United States Marine Corps; it took place between 6 and 27 June 1918 (sometimes considered to be 1-26 June). However, when on 6 June 1918 the marines launched their attack on the wood, the biggest German threat here was nearly over.

Its significance to the Corps is underlined by the presence not only of a monument to the 4th (Marine) Brigade of the US 2nd Division but also by a preserved part of the wood, which is situated to the rear of the Aisne-Marne American Cemetery. The fighting here marks the first major battle by the USMC in Europe.

The battle came – although the participants were unaware of this – at the end of the the third great German offensive of Spring 1918, the Blucher-York Offensive, also known as the 3rd Battle of the Aisne, which was launched on 27 May and officially ended on 4 June. Like its predecessors that Spring, an offensive which had started with startling territorial gains had almost ground to a halt by the time that the 2nd Division, and thus the marines, were called in to assist the French Sixth Army in holding the line and in retaking, where possible, crucial positions.

What started out as preventing the Germans from breaking through the French lines and pushing on to Paris ended in a three-weeks long slogging match in and around Belleau Wood. It was on French General Duchêne’s instigation that the woods were attacked; but in reality the marines could have just held the line and been satisfied with that. As it was, they were flung into action with little time to prepare. The fighting in Belleau Wood was extremely brutal and involved several attacks and counter-attacks; neither side was willing to yield an inch of the terrain of a feature that had local strategic significance, particularly to the Germans. Although the offensive locally here came to an end and the initial German threat in the area was nearly overcome, the focal point of the fighting moved to Villers Cotterêts, twenty-five kilometres north-east of Belleau. The Americans were not quite finished when Belleau Wood was finally captured, as the nearby village of Vaux was taken by an army brigade of the 2nd Division in a text book attack on 1 July.

The USMC has always had a good ‘publicity machine’ and Belleau Wood was certainly well known to the wider American public in the war years, particularly as it was an early action by a formation of the AEF. Although largely forgotten since the Second World War – the memory perhaps kept alive by the unusual preserved remnant of the battlefield, Belleau Wood’s reputation has been enhanced by increased interest in the war since the turn of the century. Nowadays, the battle is sometimes called a ‘pivotal event in the First World War and an iconic battle in US Marine Corps history’ by several American authors, which some of their European counterparts might regard as somewhat exaggerated.

Although there have been several guide books on Belleau Wood published in recent years (a clear indication of American interest in the battle today), what differs in this book is the number of points to visit as well as the clear narrative that precedes the tours section. Not only are many new points of interest explored in Belleau itself, but the surrounding countryside is not forgotten. Headquarters, temporary burial sites and other features are included. The book is profusely illustrated by contemporary photographs and numerous maps, the narrative supplemented by a number of first hand accounts; the whole is supported by several walking and car tours.

This is the latest in a series of Battleground books by Maarten Otte on the American Expeditionary Forces, with several more in preparation. The AEF’s performance in the war is relatively little known, not least in the USA; Belleau Wood is one of the few engagements that still carries some resonance. It is fortunate that so many of the AEF’s actions took place in parts of France that have seen little development and are in agricultural or wooded country, which means that traces of their fighting are relatively plentiful.