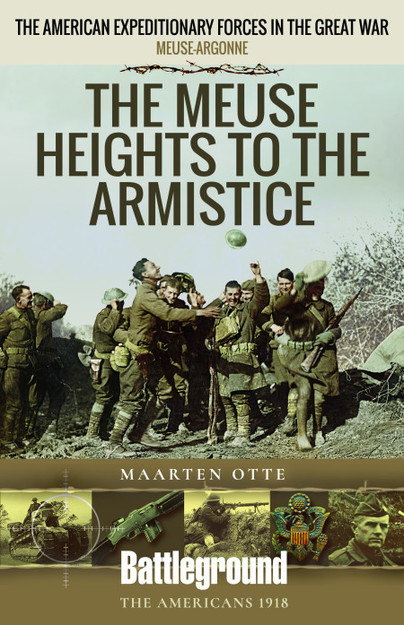 The Meuse Heights to the Armistice (Paperback)

Add to Basket
Add to Wishlist
You'll be £15.99 closer to your next £10.00 credit when you purchase The Meuse Heights to the Armistice. What's this?
+£4.50 UK Delivery or free UK delivery if order is over £35
(click here for international delivery rates)

The Americans had considerable initial success when they launched their huge offensive against the Germans in the Meuse-Argonne in the last days of September 1918. However, not everything went smoothly and the attack became bogged down, held up by the several lines of the Hindenburg System and logistical challenges. A major additional obstacle was the presence of batteries of German artillery on the high ground on the right bank of the Meuse, almost untroubled by any significant assaults by the allied forces. These guns created severe problems for the American commanders and their troops.

Eventually sufficient resources were allocated for an American-French attack on the right bank, with the aim of removing the German artillery and pushing the Germans off the Meuse Heights, part of the renewed offensive on the Left Bank and the Argonne Forest.

The action often took place over ground that had already seen ferocious fighting during the Battle of Verdun in 1916 and the French offensive of late summer 1917. It also involved the very difficult achievement of getting large bodies of troops over the River Meuse and its associated canal.

The terrain is rugged and, even then, quite heavily wooded. The American and French troops often had to fight uphill and in the face of German defences that had been developed over the previous twelve months. On the other hand, the quality of the defending troops was not high, as Germany faced so much pressure in other sectors, and included a significant number of Austro-Hungarian troops. Popular opinion tends to be dismissive of the fighting quality of these Austrian troops who, in fact, performed well.

The tours take the visitor over some beautiful countryside, with stunning views over the Meuse and the Woevre Plain. There are significant vestiges of the war still to be seen, including numerous observation bunkers and shelters as well as trenches. An unusual feature of the area are the traces of part of the Maginot Line, notably bunkers (some of which are very large) and the rail infrastructure to support it, sometimes making use of lines that the Germans built during the First World War.

One of these tours follows the fate of Henry Gunther, officially the last American soldier to be killed in action in the Great War. There is substantial myth about Gunther; the facts surrounding his death are examined, as well as placing his last action on the ground. There is a tour dedicated just to him.


This useful book is one of the Pen & Sword Battleground series, which serve as guides to battlefields and war cemeteries and as history books.

One of the benefits of touring a battlefield on your own is that you are not restricted by a pre-set schedule that you may have on a group tour. If you want to spend more time somewhere or find something which grabs your attention, you can choose to do so. That's also why it is very helpful to have a battlefield guide like this one. With this particular guide, the story and the area it covers are still among the less well travelled of the WW1 battlefields on the Western Front. There are pros and cons to that, which are mentioned in the book but there is still lots to see. Another excellent addition to the extensive Battleground series.

These books which are designed in size to act as a tour guide and very handy information book on particular battles of the Great War, are in my opinion fantastic. I have been learning so much about the Great War, just from these books that look at specific battles fought. For such a small book, you’re getting so much information, history, photography, diagrams and opinion, you really do get a lot of bang for your buck. The things that make these books really important are that they offer you photography from the time and photography from today, ideal to compare today when visiting the site. This is another well-written book that in my opinion compares very well to the rest in this Great War series, highly recommended.

This guide to the Meuse Heights continues the excellent work done by the author in delivering narrative history, context and practical guides to the US actions in the sectors where they fought. As ever it is well supported by sources, images and good maps.