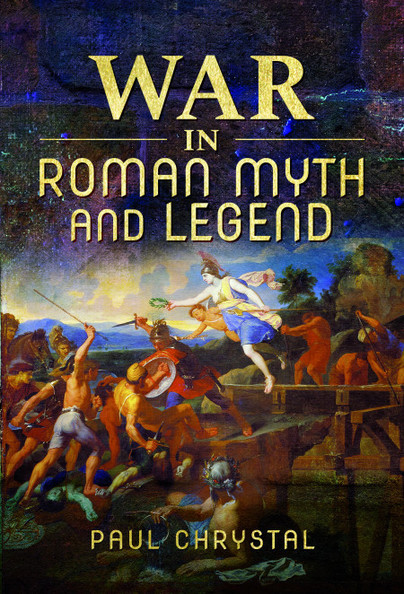 Add to Basket
Add to Wishlist
You'll be £25.00 closer to your next £10.00 credit when you purchase War in Roman Myth and Legend. What's this?
+£4.50 UK Delivery or free UK delivery if order is over £35
(click here for international delivery rates)

This book redresses the relative lack of work published on the role of war in classical myth and legend. At the same time it debunks the popular view that the Romans had little mythology of their own and idly borrowed and adapted Greek myth to suit their own ends. While this true to some extent, War in Roman Myth & Legend clearly demonstrates a rich and meaningful independent mythology at work in Roman culture.

The book opens by addressing how the Romans did adopt and adapt Greek myths to fashion the beginnings of Roman history; it goes on to discuss the Roman gods of war and the ubiquity of war in Roman society and politics and how this was reflected in the Aeneas Foundation Myth, the Romulus and Remus Foundation Myth and the legends associated with the founding of Rome. Warlike Women in Roman Epic and Trojan heroes are discussed next and the use of mythology by Roman poets other than Virgil. The Theban Legion and the vision of Constantine myths conclude the book.

The 43 full colour plates in the book's centre add flesh to the bones of the prose put forward by a knowledgeable author. I would recommend this book to anyone interested in the time period.

Great research on the role and importance of a human, social phenomenon of "War" in the development of early ancient world-understanding, religion, and very-very human behaviors personified in mythology.
Among all ancient belief systems, Roman, in my opinion, is the most brutal, dramatic, and brutal. Though it has its roots in Greek mythology, Greek one is full of inter-personal drama between deities and, yet the Roman mythology steps one step up and builds very complex and deeper relations between deities and mortals, kingdoms, tribes, bringing much more brutality and physical force to the arena.
The book is presenting perfectly how the human phenomenon of "War" is influencing and being also being influenced by the system of human beliefs, how we personalize ideas and how such a subject, as war can be pivotal in human understanding of the world.
A great read for anyone interested in mythology, origins of mythology, human in existential, as well as existential ib human brain.

...full of fascinating detail of the mythical legends of Rome. He [Paul Chrystal] brings a new perspective on the Romans and how they used not simply adaptations of Greek mythology to explain their history, but their own legends as a means of illustrating their ‘Romanitas’. You do not have to be a scholar to enjoy it and a thorough knowledge of Roman history is not a prerequisite to purchase.

A really interesting read for any military historian, as it might give you a different view of the events of the time.

Roman history has always been a favorite study of mine. I was interesed in learning more about what the Romans thought about their wars. How did they look at themselves and how did their myths prepare the soldiers and populace for campaigns and sacrifice. This book by Mr Chrystal does a very good job of explaining what I have wondered about for a long time.
Roman history is not scarce. They left written accounts and of their wars and plagues. But what about the religious aspects of war? What myths did the Romans believe helped them and where did they come from? A lot of the myths came from Greece. However , the Romans were all about success and practical things. So if the myth and God helped them they continued its belief. It is fascinating to learn about the small bronze hand found near Scotlands border that the Roman army had used in a temple for blessing its troops. I never heard about that practice before .This book is not only factual but covers much new information as to what the Romans thought when they went on campaign. The author has done a great job of making history interesting . Excellent research and prose make this book a read that every student of ancient history should read.

I was delighted to read this book, it's a fantastic look at a subject not often covered. Highly readable and incredibly interesting, I loved reading about Gods an Goddesses I was previously unaware of even though I've read just about everything on Roman mythology.

5 Stars, thanks so much for Pen and Sword for allowing me to review this fantastic work.

This book should be required reading in university/college Classics classes. The research and knowledge that went into this is mind blowing and fascinating. I had never thought about parallels and contrasts between Greek and Roman mythology. This book details Roman reasons for adapting Greek mythology to emphasize their unique culture, origin, politics and so on. Their gods and goddesses were equivalents and had different names.

Clear your mind of other things as you read this as the sheer amount of information can be overwhelming. It took me awhile to recall the mythology, wars and characters and people involved, both Greek and Roman. Sometimes it is challenging to separate intertwined myths and actual history. But the Romans used mythology to tell history.

Wars, of course, dominate as they were common in ancient times. You may also recall Romulus and Remus, the Trojan War. the Sabines and writers including Virgil, Horace and Ovid. The author goes into great detail about these and so much more. You will also (re)discover plentiful major and minor goddesses such as Bellona, Diana. Victoria and Camilla as well as gods such as Mars, Virtus, Aeneas and Quirinus and their roles.

The timelines and photographs at the end are useful and remind me of my many museum visits in Rome and Naples.

Those into mythology and/or Classics, academics or not, should pick up this book and absorb it.