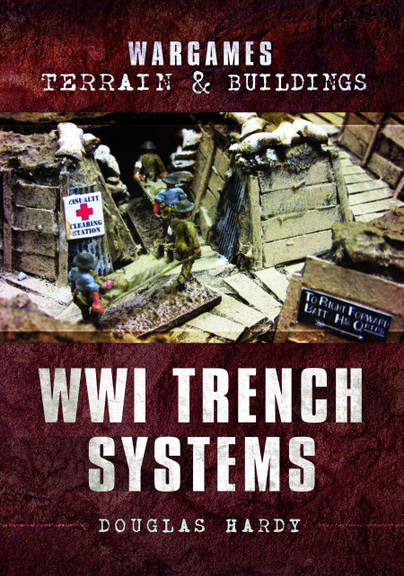 Add to Basket
Add to Wishlist
You'll be £14.99 closer to your next £10.00 credit when you purchase Wargames Terrain and Buildings. What's this?
+£4.50 UK Delivery or free UK delivery if order is over £35
(click here for international delivery rates)

Although it was a global conflict, for many WW1 is synonymous with the war in the trenches of the Western Front. For anyone wargaming these battles a good trench system is a must.

Douglas Hardy is a very experienced wargamer and terrain modeller and a member of the Western Front Association who has walked the battlefields many times. From the initial choice between stand-alone pieces on a mat or a fixed, bespoke layout, through to final detailing, he shares his experience, giving practical advice on building your own trench system.

He considers the differences between British, German and French trenches, which differed in design and construction, as well as developments in defences through the phases of the war. A trench system is not just the trench itself of course, but also the dugouts, barbed wire entanglements, sandbags, gun emplacements and pillboxes. Shell holes and shattered forests are also covered. Each element is explained in step-by-step detail, illustrated with numerous colour photos and there are also reference photos of real trenches.

Written for modellers & wargamers this is a fascinating insight into trench building & design, so appeals to a much wider audience, especially as it includes a section on WW1 archaeology too. Something different and an enjoyable read!

"The best thing about this book is the large amount of photos showing the author's own trench systems, both in progress and finished."

“If you've ever thought about creating WWI trench systems, here's the book to pick up to learn from an expert."

If you are a wargamer looking for help with building your miniature trench systems, this is a book for you.

I found this book to be thoroughly enthralling, giving excellent references to the subject matter while at the same time, not getting lost in the timeless history surrounding it. The author has managed to show history through a few clever tricks and displays.

I would definitely recommend this book to any modeller or amateur historian.

Rating: five out of five.

The war games series has proved very popular with both war gamers and military history enthusiasts. The high photographic content provides considerable detail of the trenches and buildings constructed in WWI – Highly Recommended

The trench system was such an overwhelmingly integral part of WW1 warfare, that to have it described and examined in such minute detail is something quite special.

Overall I really enjoyed this book. I found an easy and quick read. It will be invaluable for any wargamer who wants to create a trench system for their gaming table and I highly recommend it.

In this book Douglas Hardy gives the wargamer and terrain modeller the benefit of his great experience in modelling, provided and of his excellent research and knowledge of not just modelling methods and materials but referenced to actual trench systems in the period supported by good practical advice. A valuable addition to the wargamers library and is highly recommended.

What a fascinating little book about the WWI Trench System, from making your own in miniature model form to the latter-day refurbished trenches of today. The book is written in order and explains to the reader how to exactly create from scratch a model trench system and looks at the various types of trench used by different nations such as the British, French and German. There is actually a difference between them which some might be surprised at with many having differing benefits and problems. Douglas Hardy is clearly an expert on the subject and writes a good book which I think would benefit both the beginner and regular modeller. The photos in the book are varied and easy to follow whether it be models or the real thing. An excellent book and even if you are not into modelling there is still plenty to learn.

The pictures of the authors groundwork along with the pictures of preserved trenches in the final chapter is set to inspire plenty of modellers/wargamers I am sure. Another very useful addition to this series of books for wargamers, this time in particular for those interested in the period of WW1.

The author is a very experienced wargamer and model terrain builder. He is a member of the Western Front Association and has visited the battlefields of France and Belgium numerous times. He lives in the Southeast of England. 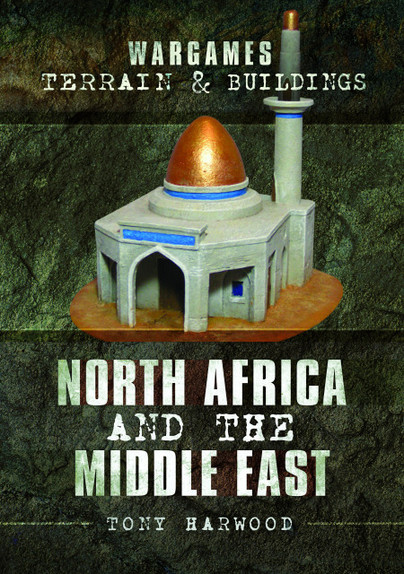 The Middle East and North Africa have been the backdrop for many conflicts through the centuries, making them a popular setting for miniature wargames. Whether you are fielding your Parthians against invading Roman legions, Crusaders against Saladin’s Saracens, recreating Lawrence’s exploits in Arabia, or trying to halt Rommel at El Alamein, this book will help you set the scene for your games. Expert terrain modeller Tony Harwood takes the reader through a range of projects step by step, from selection of materials to the finished items. Each stage is illustrated with colour photographs.…

Click here to buy both titles for £29.98
Customers who bought this title also bought...
Re-Release