Preorder
Add to Wishlist
You'll be £20.00 closer to your next £10.00 credit when you purchase Warriors of the Ancient Greek World. What's this?
+£4.50 UK Delivery or free UK delivery if order is over £40
(click here for international delivery rates)

This in-depth visual guide, Warriors of the Ancient Greek World, boasts over 140 lavishly detailed photographed and illustrated recreations of the warrior panoplies of the fifth and fourth centuries BC.

It covers the heavy infantry and cavalry of Greece and Macedonia, the light infantry and horsemen of the Thracian territories and the fighting men and women of the vast Persian and Scythian realms.

The book has been crafted to show these ancient combatants in as much physical, gritty detail and character as possible. The combatants are seen torn from moments in time and dropped onto the page. It illustrates the range of distinct weapons and equipment carried by them, why it was needed and how it was made. It shows how the warriors may have looked whilst on campaign, mud, blood and all.

Kevin Giles has been working in the British film industry as a costume prop specialist for over twenty-three years. He studied Costume Design at London’s world-famous Wimbledon School of Art earning a BA Hons degree, graduating in 2000.

He has been involved in producing costume props for well over forty major film and TV productions credited and uncredited. Specialising in costume armour and leatherwork, he has worked under some of film's finest award-winning costume designers. Kevin’s credits include No Time to Die (2021), Ready Player One (2018), Wonder Woman (2017), Marvel's Avengers, Age of Ultron (2015) and Guardians of the Galaxy (2014) to name a few.

A full list of his film work can be seen on IMDB.com, you can also follow Kevin's work on Instagram @kevin_giles77. Kevin's interests include ancient history, natural history and travel. 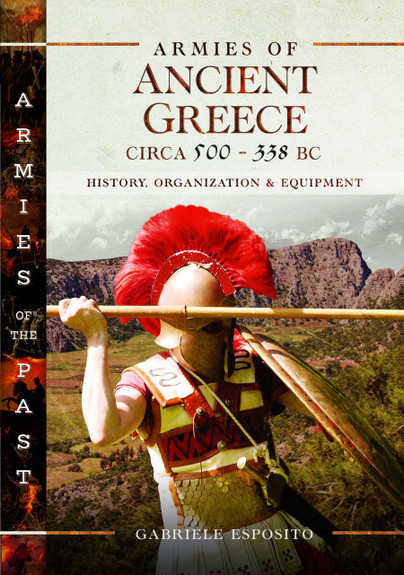 Armies of Ancient Greece Circa 500 to 338 BC History, Organization & Equipment (Hardback)

Conflict was rife among the Greeks of the Classical period, including some of the most famous wars and battles of the whole ancient period, such as the defeat of the Persians at Marathon, the Spartans’ heroic last stand at Thermopylae, the gruelling Pelopponesian War and the epic March of the Ten Thousand. The Greek heavy infantry spearmen, or hoplites, are one of the most recognizable types of ancient warrior and their tighly-packed phalanx formation dominated the battlefield. Covering the period from the Persian Wars to the Macedonian victory at the Battle of Chaeronea, Gabriele Esposito examines…

Click here to buy both titles for £45.00
Other titles in Pen & Sword Military...
eBook