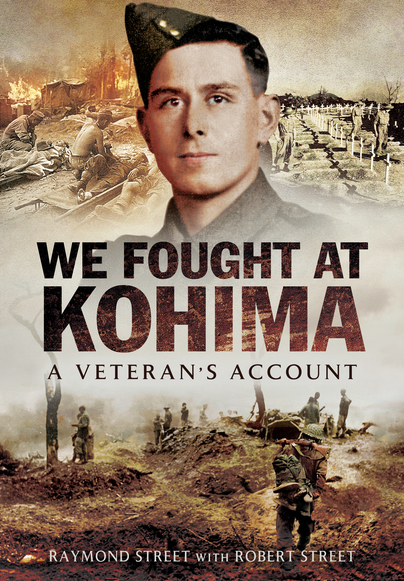 We Fought at Kohima (ePub)

You'll be £4.99 closer to your next £10.00 credit when you purchase We Fought at Kohima. What's this?
Need a currency converter? Check XE.com for live rates

The Japanese advance through Thailand, Malaya and Burma appeared unstoppable and the fate of India looked utterly precarious.

The garrison of the Kohima outpost numbering some 1500 British and Indian Army soldiers faced over 13,000 fanatical and previously victorious Japanese troops. The following sixteen days marked the turning point of the war in the Far East thanks to men like Raymond Street who fought with legendary courage and tireless persistence.

Raymond was a member of the 4th Battalion The Queen's West Kent and as a company runner he was uniquely placed to witness the dreadful and dramatic events as they unfolded. Not only did he miraculously survive but he made a superb record of the battle as fortunes ebbed and flowed.

His memories have been transcribed into this first-hand account of one of the most decisive and hardest fought battles of the Second World War. We Fought at Kohima will surely be judged as a fighting man's memoir of the highest quality to rank alongside such legendary works as Men at Arnhem and Quartered Safe Out Here.

The whole book is rounded off with a Postscript covering Raymond Street’s life since leaving the army, followed by an Appendix A naming those who fell during the siege of Kohima and Appendix B providing a précis of what happened after the siege.
The book is well written and certainly worth reading!

How fortunate we are that Raymond Street not only recorded his experiences in a day by day diary of the sixteen days of the siege, a superb firs-hand account, but ensured they were published.

This reprint has done justice to the original book, and has been enhanced by some additional text and some new maps. There are fourteen pages of photographs in the middle of the book, many of which have not been seen elsewhere, although some are more common photographs of Kohima. The Siege of Kohima was voted Britain’s Greatest Battle in a poll conducted by the National Army Museum recently, and it is truly a remarkable story of human endeavour. About 2,500 men of the British and British Indian Army were surrounded at Kohima between 4 and 20 April 1944, besieged by an entire Japanese division in a most savage and determined series of assaults.

This book details the siege from the account of a man who was there, Raymond Street, a Birmingham man who found himself in the Royal West Kent Regiment, the only cohesive battalion involved in the siege. I find this story compelling, and Bob Street has written the book in the manner in which his father told him the story. There are several short sentences, but that is how the tale was related, so to me it provides authenticity to the account. It provides the Private soldiers’ account of this epic battle, which are few and far between, and as such I thoroughly recommend it.

A rare first-hand account of the battle of Kohima in 1944.