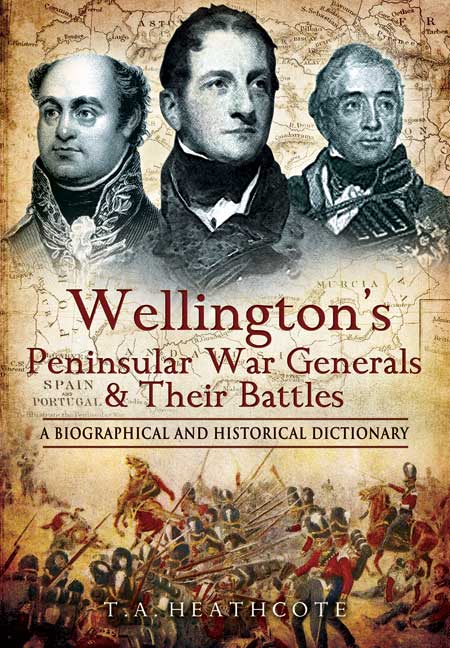 A Biographical and Historical Dictionary

Add to Basket
Add to Wishlist
You'll be £19.99 closer to your next £10.00 credit when you purchase Wellington's Peninsular War Generals and their Battles. What's this?
+£4.50 UK Delivery or free UK delivery if order is over £35
(click here for international delivery rates)

Wellington's achievements in the Peninsular War cannot be overestimated. At the outset in 1808 Napoleon and his Marshals appeared unstoppable. By the close Wellington and his Army had convincingly defeated the French and taken the war across the Pyrenees into France itself. He and his Generals had waged a hugely successful campaign both by conventional means and guerrilla warfare.

This book contains the pithy biographies of some forty senior officers who served Wellington, in the majority of cases, so ably during this six year war. Many had experience of battle prior to the Peninsular and went onto greater heights
thereafter. There is a section summarising the major engagements that this 'band of brothers' took part in.

The book is arranged in alphabetical order and each thoroughly researched entry places its subject's life in his historical and political context.

The result is a highly entertaining, informative and authoritative book.

Tony Heathcote was senior curator at RMA Sandhurst. His published works with Pen and Sword include The British Field Marshals, The British Admirals of the Fleet, and Nelson's Trafalgar Captains. He lives at Camberley, Surrey.

It is hoped that when this book is well received that the author and publisher will produce similar books on the remainder of Wellington’s Peninsular generals. Recommended.

This is a thoroughly researched, well written and neatly presented work, providing a total of 41 valuable biographies. These are presented as pen portraits for less well-known commanders and fuller profiles for renowned or senior generals serving Wellington in the Peninsular War. Whether by design or chance, and we do not know from either the synopsis or introduction, the collection benefits from a review of commanding officers representing all the major arms of military service, namely: infantry, cavalry, artillery, engineers, commissariat and medical.

The book fills a vacuum in Napoleonic historiography, giving the reader a greater understanding of how dependant the best if generals is upon the quality of his staff and his field officers

This book will appeal to the Napoleonic enthusiast for its detail of each general's life and has enough human interest to engage the general reader.

Wargamers, the inveterate group who follow all things military, will be interested for leads and tidbits on all of the early mediterranean, West Indian and Indian campaign in which the generals participated prior to the Peninsular campaigns.

TONY Heathcote’s useful volume is a companion to one on Nelson’s Trafalgar captains. He describes generals both well-known and neglected: “Black Bob” Crauford who fell storming the breach at Ciudad Rodrigo; “Daddy” Hill, on whom Wellington could depend; Picton urging on his “drunken set of brave rascals” the Connaught Rangers; Alexander Dickson, the Duke’s invaluable chief gunner. A brief introduction explains promotion and purchase, nearly 130 pages cover 41 generals. Thirty more précis the battles and sieges. Gordon Corrigan writes a brief foreword. Those interested in Wellington’s peninsular campaigns will want this book to hand.

This book covers the lives of forty one of the best known divisional commanders, principal staff officers and heads of supporting arms and services in Wellington's Anglo-Portuguese army.
Wellington's Peninsular War Generals are widely regarded as being better subordinates than independent commanders, a perception that owes much to Wellington himself. While many of them suffered from comparison with the great man himself, this book shows that while some of his generals failed when trusted with independent commands, others did better and deserves more credit than they are often given.
All these men had an important role to play in the Allied campaign in the Peninsular theater, and the author has provided us with a concise account of their contribution to Wellington's success. Wellington's Peninsular War Generals and Their Battles is an informative and entertaining read, and will be of interest to students of the British Army in the Napoleonic Wars.

This is an informative and entertaining read, and will be of interest to students of the British Army in the Napoleonic Wars.

Despite his own less than complementary comments on their abilities, the Duke of Wellington actually was supported by a very capable band of generals during his long campaigns in Spain and Portugal. This volume presents biographies of forty-one of those subordinates, including divisional commanders, staff officers and two members of the support staff.

This book is designed to be used as a reference work, to be dipped in at need, rather than as a text to be read from end-to-end. As a result the biographies are largely independent of each other, with a certain amount of unavoidable repetition. Having said that, one of the key impressions one gets from this book is that Wellington's generals often had very varied careers, serving in far flung theatres of war, from the West Indies to India. This is best illustrated by the thirty-five articles on those battles and campaigns that involved at least five of the men covered. This section starts with the early campaigns in the Low Countries in 1793-96, but then expands out to include campaigns in Egypt, South America, Denmark and the Baltic as well as the more familiar battles of the Peninsular War.

This is a useful reference work, bringing together an interesting selection of biographies that allow the reader to gain a better understanding of the types of men who served under Wellington and their wide range of experiences.