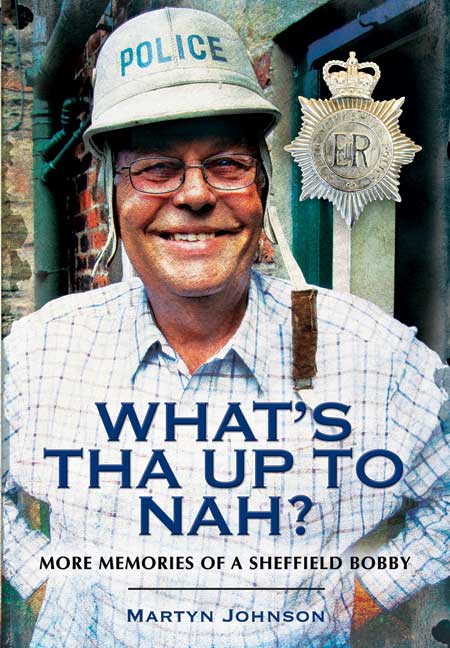 What's Tha Up To Nah? (Paperback)

Add to Basket
Add to Wishlist
You'll be £12.99 closer to your next £10.00 credit when you purchase What's Tha Up To Nah?. What's this?
+£4.50 UK Delivery or free UK delivery if order is over £35
(click here for international delivery rates)

Martyn continues his wonderful stories about policing during the 1960s and 1970s. As with his previous volume the book is written from the heart, not so much nostalgia as a genuine feeling for the people, animals, places and history of Sheffield. As before, humour and sadness combine so that every chapter really is a compelling read. Life as a traditional beat bobby is rapidly becoming a fading memory. At a time when front-line policing is under threat nationwide there can be no better time to reflect on the life and times of the old fashioned street policeman whether on foot, on a cycle, motorbike or as an observant passenger in a Hillman Husky. Martyn's reminiscences not only contribute to our local social history but are also relevant to the twentieth-first century policing debate.

Martyn has again come up with a book that is as readable and enjoyable as his last. Students of social history may do well to read these memories as a primary source.
… An excellent book!

Yet again his humour and compassion for other people and his love for the city of Sheffield shine through each story. Martyn Johnson is a born story teller and the reader is soon captured up and taken back to the days of the bobby on the beat, police boxes, a clip round the ear and respect for the local copper.
Like his first book, this one contains some incredibly funny stories and some extremely sad and heart breaking recollections too. From dealing with the death of a small boy who has been run over to the suspected shoplifter with a pocket full of combs, Martyn Johnson could adjust himself to any situation, handling each one with care and sympathy, and sometimes with the back of his hand!
The city of Sheffield and it's people are the main stars of his stories and whilst the city may have changed dramatically since the days that Martyn walked the beat, the people and the humour are still there.
I hope that Martyn Johnson has more stories to tell and that he will continue to share them with readers for a few more books yet.

Martyn Johnson and I are about the same age, (just the wrong side of sixty), and both joined the police in the mid-1960’s. He walked a beat and kept the peace in Sheffield;I walked a beat and kept the peace in the East End of London. Our careers took different paths and whilst he remained true to his roots I opted to climb the greasy pole, ending up as a Deputy Assistant Commissioner at Scotland Yard. Some might say that we had little in common, but that could not be further from the truth, because what comes across loud and clear in Martyn’s writing is his love of ‘real’ policing, of the sort that we both delivered in those early years. On that subject I am at one with him – things were better then!
Sadly, today’s generation of policemen (and women), for all sorts of reasons, do not see themselves as part of the communities they police. All too often, kitted up in stab-proof body armour, with a lethal array of weaponry on their belt, they operate as an army of occupation. The rest of us, indeed the general public as a whole, are regarded as enemies. It gives me no pleasure to observe that policing in the twenty-first century is largely delivered by granite-faced bullies, for whom the word ‘community’ is regarded as a dirty word. Life imitates art, and on the vanishingly rare occasions when we actually see police officers patrolling, they are invariably in pairs, studiously ignoring you and me, as if they were appearing in a TV police drama.
It could and should have been so different.
Read Martyn’s account of working class Sheffield forty years ago and you will see what we have all lost. I could match him story for story, anecdote for anecdote, because whether it was the characters who lived and worked in Attercliffe and Darnall, or the people on my patch in West Ham, the name of the game was the same. We delivered a service to people; usually with a smile, occasionally with a scowl, and very occasionally with a ‘clip around the ear’ and trip home to speak to young Jimmy’s mum or dad – who always knew what to do to underline the message. We arrested those who needed to be arrested, but more importantly we did not arrest those who didn’t need to be arrested. Long before the days of targets and ‘performance measures’ we just got the job done. It wasn’t perfect, it never had been, but what we had in those long gone days was an understanding of ‘service’ and that was the key to our success. Ask anyone today what they want from the police and the most common answer is that they would just like to see them on their streets, walking a beat, getting to know them. We used to be good at that, but not now. To today’s cops that sort of policing is for wimps.
Thus, to read Martyn Johnson, certainly for me, and I suspect for most people, is like a walk down memory lane. A sometimes sad, sometimes amusing, sometimes laugh-out-loud chronicle of characters and situations that he recalls so expertly, and I recognise so well