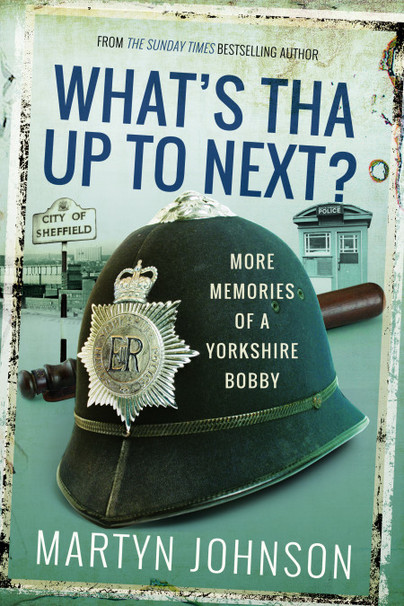 What's Tha Up To Next? (Paperback)

More Memories of a Yorkshire Bobby

Add to Basket
Add to Wishlist
You'll be £7.79 closer to your next £10.00 credit when you purchase What's Tha Up To Next?. What's this?
+£4.50 UK Delivery or free UK delivery if order is over £35
(click here for international delivery rates)

Welcome to What’s Tha Up To Next?, the fifth volume of Martyn Johnson’s acclaimed series of stories about policing during the 1960s and 1970s. Whether ‘on the beat’ or ‘as CID’, once again Martyn enthrals, surprises and shocks his readers with
tales set in an almost forgotten era: a veritable Lost World of people, places and phrases in his beloved Sheffield.

This book will focus on Martyn’s latter years as a beat bobby, with more unbelievable true life tales told with Martyn’s wicked sense of humour and candour. As usual, Martyn’s down-to-earth honesty and humour shines through the pages; but he never loses sight of the human condition in all its forms: good, bad, sad and happy.

Once more, a myriad and extraordinary range of characters from Lost Sheffield are brought to life: from real to surreal and naughty to notorious. The antics of Mr Devious Pillock, Mr Crowbar and Mr Housebreaker, alongside the likes of Steve the Spiv and Marilyn Monroe, make a most compelling read; and affection merges with affected in unforgettable cameos about Fred (the Knight of the Road) and ‘Soft Cock’.

More unbelievable true life tales told with a wicked sense of humour and candour bringing to life characters such as Mr Devious Pillock, Mr Crowbar and Steve the Spiv.

In Martyn’s previous book What’s tha up to nah? (reviewed in Newsletter 89), he had been transferred to CID. He didn’t enjoy the change, especially the paperwork, and returned to uniform beat duties. His latest volume starts with a chapter looking back at his inital recruit training at Pannal Ash then covers his later years in the job, back with the public that he wanted to serve. Of course, he still deals with villains, not always successfully, but most of the anecdotes are about honest, law-abiding folk in the Sheffield area. Whether sad or serious, he tells them well and they are worth reading.