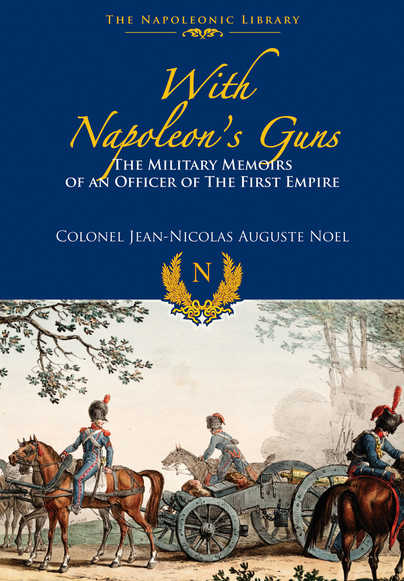 The Military Memoirs of an Officer of the First Empire

Add to Basket
Add to Wishlist
You'll be £19.99 closer to your next £10.00 credit when you purchase With Napoleon’s Guns. What's this?
+£4.50 UK Delivery or free UK delivery if order is over £35
(click here for international delivery rates)

In 1795 – the year Napoleon Bonaparte was appointed Commander-in-Chief of the French army in Italy – the seventeen-year-old Jean-Nicolas-Auguste Noël entered the Artillery School at Châlons. A year later, with Napoleon proclaiming himself the liberator of Italy, Noël was appointed second lieutenant in the 8th Regiment of Horse Artillery. Written in 1850, With Napoleon’s Guns is his remarkable memoir of two decades in the Emperor’s service.

A trained artilleryman himself, Napoleon dramatically transformed the role of artillery from a cumbersome and tactically limited force into a fluid, independent and highly mobile trans d’artillerie. This new organisation required fresh, new officers who could act on their own initiative – officers such as Noël.

From the optimism of the early years in Italy , through the privations of the retreat from Moscow and the horrors of the Battle of Leipzig to the disillusionment of the Emperor’s defeat at Waterloo, Noël charts both his personal career and, at close hand, the rise and fall of the First Empire with frankness and percipience. Based on his journal he kept from his cadetship at Châlons, With Napoleon’s Guns is a revealing account of an officer at the heart of Napoleon’s army.

Jean-Nicholas-Auguste Nol, an artillery officer in Napoleon’s army, was 18
years old in 1796 when he was appointed second lieutenant in the 8th Regiment
of Horse Artillery. He served Napoleon for 20 years. This memoir, based on
Nol’s war-time journals, was written in 1850 and originally published in
1895 by Berger-Levrault. It details Nol’s career within the context of the
fate of Napoleon’s empire. B&w historical illustrations are included. The book
was previously published in 2005 by Greenhill Books.

In 1795, the year in which Napoleon Bonaparte was appointed Commander-in-Chief of the French army in Italy, the 17 year old Jean-Nicholas-August Noël entered the artillery school at Châlons. A year later Noël was appointed second lieutenant in the 8th Horse Artillery.

This book, first published in 2005 and now again in 2016, is his memoir of two decades in the service of the Emperor. Napoleon transformed the role of artillery from a cumbersome and tactically limited force into an independent and highly mobile arm. From the optimism of the early years in Italy, through to the retreat from Moscow, the battle of Leipzig on to the disillusionment of Napoleon’s defeat at Waterloo, the author charts both his personal career and the rise and fall of the First Empire.

In all there are 13 monochrome illustrations supporting the text, along with two maps and an index.

It was during the invasion of Russia in 1812 that Jean-Nicolas-Auguste Noël was appointed to the command of an artillery train squadron. He was involved in the Battle of Leipzig and the defence of Paris in 1814. He rallied to Napoleon upon the latter's return from Elba to fight in the Waterloo campaign. After Waterloo he was Director of Artillery in Bayonne.