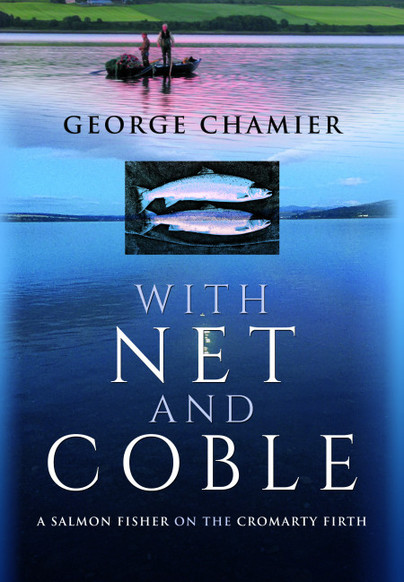 With Net and Coble (Hardback)

A Salmon Fisher on the Cromarty Firth

Add to Basket
Add to Wishlist
You'll be £17.50 closer to your next £10.00 credit when you purchase With Net and Coble. What's this?
+£4.50 UK Delivery or free UK delivery if order is over £35
(click here for international delivery rates)

An ancient and environmentally friendly method of catching salmon, by spotting them in the water and taking them with ‘net and coble’, unique to the Cromarty Firth, was recently banned by the Scottish government. The men who knew this way of fishing are no longer young, and there is every risk of their centuries-old techniques dying with them.

So it is fortunate that a practitioner of the craft for over fifty years has drawn on his knowledge and experience to paint a rich picture of this fishing, the firthland itself and the history of salmon netting. He describes great fishing days, the life of the fishing bothy and the characters who inhabited it. He takes the reader through the fish’s life cycle and discusses declining catches and the threats to the wild salmon’s future. His and his fellow netsmen’s respect for this legendary fish and their love of the firth and its wildlife shine through.

With maps, many photographs and a helpful glossary, the story is enhanced by recipes, anecdote and character sketches, also five poems on fishing, the work of a variety of hands.

While anglers and conservationists will be drawn to this unique account, there is much to interest the general reader, who will discover a vanished world, grand Highland characters and the delights of fishing in a beautiful setting.

Highlight: 'This is a thoroughly honest and nitty-gritty account of salmon fishing with a sweep net on the Cromarty Firth over a fifty-year period...'

"This is a thoroughly honest and nitty-gritty account of salmon fishing".

With Net and Coble is a beautifully written retrospective of an archaic, dying (and now illegal) skill.

The author takes us on a journey through the waterways of Scotland, following the salmon along both beach and river, discussing the techniques of sweep netting: where they follow the fish and manually walk the net around to catch them. He takes great pains to emphasise the highly limited number of fish caught this way, comparing it to the great drift-netting commercial operations, and the environmental impacts of them both.

Filled with history, lore and legends, as well as a strong environmental message, this was a fascinating read.

This is such a lyrical book which really resonated with me. It's full of recollections and reminiscences of a vanished and now outlawed method of sweep fishing. The author takes pains to distinguish the type of limited and skilled beach seine netting which follows salmon by eye and intercepts them in very limited numbers, and the sort of massive deep water drift netting which is responsible for the critical destruction and collapse of ocean biospheres we're seeing today.

The book is peppered with black and white photos of fish and fishermen, wildlife, and the wild places. The captions are well written and provide some good background info. There's also a glossary and cross-referenced index.

Much of the book is somber reflection: the rivers are in bad shape, the ocean even more so, the traditional skills are dying out and at risk of being lost forever, the health of the salmon is at risk from commercial fisheries which serve as ecosystem destroying spawning pools for parasite loads with which the local wild populations are ill-equipped to cope. The book ends, reflectively, on a guardedly optimistic note. One of the more profound takeaways for me with this book was the fact that I was fairly complaisant in my ignorance of "netting bad, fly fishing good". The author writes passionately and well about the traditions of net and coble fishing and the loss of a way of life and it's clear that he has a deep and profound love of the wild places and a deep feeling of stewardship and protectiveness.

Five stars. This would be a superlative selection for public library, home library, or gift for a nature/fishing enthusiast. Sublime wintertime reading material.

Love the poems throughout, the pictures and legends, superstitions and history and maps and so much more.
Scotland: This is a book about how the old timers would fish for salmon. What a skill to have to get the fish. Everything is well explained about how to do it.

George Chamier was partly brought up in Ross-shire and educated at Eton and the universities of Cambridge and Lancaster. After seven years as an advertising executive in London and Amsterdam, he became a full-time fisherman in the Highlands for twelve years, having first learned the art of net and coble fishing for salmon as a schoolboy. George retired as Head of History at Bradfield College in 2005 and now lives in London, working as a tutor and editor. Until 2018 he spent at least a month every summer fishing on the Cromarty Firth.

His previously published works include When it Happened in Britain and When it Happened in Scotland (both Constable), The First Light, a history of Innerpeffray, Scotland’s oldest lending library, and Britain’s Greatest Prime Ministers (Endeavour Press). ‘Cold Iron’, an article about the fishing, appeared in Archipelago magazine.