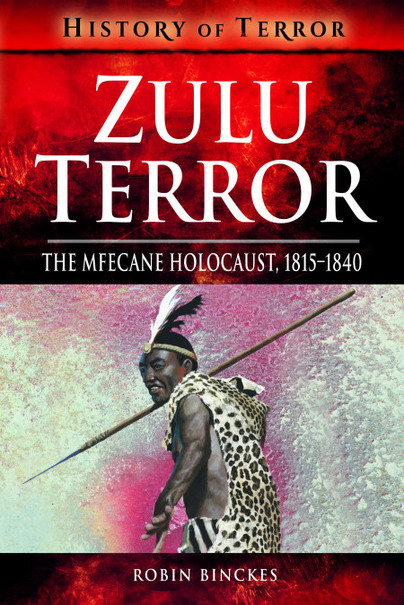 Add to Basket
Add to Wishlist
You'll be £9.09 closer to your next £10.00 credit when you purchase Zulu Terror. What's this?
+£4.50 UK Delivery or free UK delivery if order is over £35
(click here for international delivery rates)

When the wagons of the Voortrekkers – the Boers, those hardy descendants of the Dutch – moved into the southern African interior in 1836, on the Great Trek, their epic journey to escape British control at the Cape, the wheels of their wagons crunched over carpets of skeletons of those slain in the Mfecane.

The years 1815 to 1840 were probably the most devastating and violent period of South Africa’s turbulent history. The Mfecane (Zulu) or Difaqane (Sotho) was a result of many factors including internecine conflict among the Zulu tribes themselves. Faced with the wrath of the great King Shaka, Mzilikazi (The Road) fled with his followers, who became the Matabele, cutting a swathe of destruction, pillage and genocide across southern Africa from the land of the Zulu (KwaZulu-Natal today) to the Highveld in the north.

New alliances and allegiances were forged as refugees fled from the path of the rampaging Mzilikazi, leading to the creation of new nations and alliances between the arriving Voortrekkers and the enemies of the Matabele. Finally defeated in 1836 by the Voortrekkers in a nine-day battle, Mzilikazi crossed the Limpopo River and founded the kingdom of the Matabele in what is now Zimbabwe.

The film Zulu has given us most of what we know about the Zulus, now it’s up to people like Robin to give us a full account of this group of tribes as they carved a name for themselves in the early years of Victoria’s reign.

This book expands the very interesting History of Terror series. There is much to learn about the history of Africa and this book exposes the wars within the Zulu peoples and with the Boers who had moved into the interior to escape British rule. – Very Highly Recommended

The book gives a very good account of a period of turmoil, where the Zulu tribes were at war with one another as they fought for ascendancy, cattle and land. It provides an insight into how the European Settlers were able to find and exploit an existing slave trade, and to pit tribes and sub-tribes against one another. It also touches on the roots of the Boer War, between Dutch and British settlers, which I am sure will provide material for another book in the series.