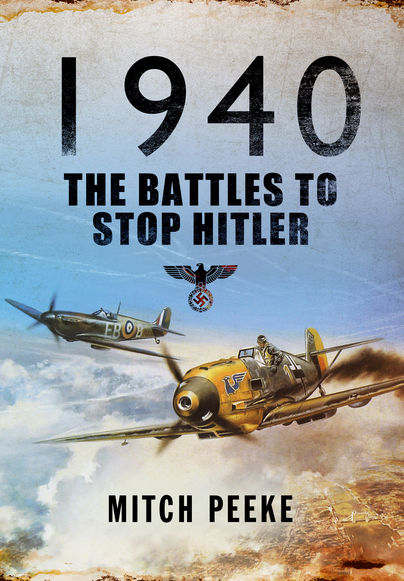 Click here for help on how to download our eBooks
Add to Basket
Add to Wishlist
You'll be £4.99 closer to your next £10.00 credit when you purchase 1940: The Battles to Stop Hitler. What's this?
Need a currency converter? Check XE.com for live rates

Two Battles, both of which were fought in the momentous year of 1940, shaped the future of World history. The first; The Battle of France, was hard fought and ignominiously lost in just six weeks, culminating in the miraculous evacuation of more than 338,000 French and British troops from Dunquerque, followed by a humiliating Armistice. The second; The Battle of Britain, would last for months, as the German Air Force tried to destroy the RAF and thus pave the way for Hitler's invasion of England. The second Battle culminated in the “Night Blitz” on London and other major British cities.

In telling the story of that momentous year, this atmospheric book gives the reader a true taste of those times. Using a broad overview combined with a sometimes localised spotlight on some of the events, the narrative really gives the reader a Grandstand view of those truly epic times. As a backdrop to the narrative, just as it was in 1940, is what kept peoples' hopes and spirits up; whether it was the popular music of the day, films, the theatre, the newspapers and the wireless broadcasts.

The book also looks at the lead-up period to 1940 and covers the development of fighter aircraft, radar, the modernisation of the RAF, the rise of Hitler and how the Facsist movement grew and declined in England. The book takes the reader through the declaration of war into the “phoney war” period, the evacuation of children from major towns and cities and then through the shock of Hitler's “Blitzkrieg” as the German offensive blasted its way across the low Countries and into France.

The rich narrative is laced with the first hand accounts of people who, with differing perspectives, lived through those momentous times and events. This book probably represents the last chance to hear of those times from those who were actually there. As Churchill himself once said: “History with its flickering lamp stumbles along the trail trying to kindle the passion of former days.” This book aims to fulfill that worthy aim. It is also an unashamed tribute to the fifteen pilots of 501 and 66(F) Squadrons of the RAF, who lost their young lives in the Battle of Britain, whilst flying in defence of this country from the largely forgotten airfield of Gravesend in Kent.

I read this book in about two days, it’s easy, and compelling reading, very detailed and very personal. “1940: The Battles to Stop Hitler” is not about the Battle of Britain per se, but more a personal examination of the people who were involved in the two battles; Dunkirk and the Battle of Britain, and how their lives were interwoven in the summer of 1940. Light hearted in places, extremely moving in others, it adds another dimension to those famous battles, and I for one would most certainly recommend it.

This book offers a wider and more balanced view and, what struck me most, it is aimed at the generation(s) that did not get the tales about this epic conflict handed down by their parents and grandparents.
Mitch Peeke gives an excellent historical background and explains in detail why – in his view – the Battle for France and the Battle of England are Act One and Act Two of the same drama. Or, as he puts it: because of the Battle of France and the Dunkirk evacuation, Britain was not knocked out, so there had to be a Battle of Britain.
His book is heavily based on eyewitness accounts, many from members of his own family, and this guarantees a nice amount of interesting and amusing anecdotes. Thanks to this, Peeke was able to go wider afield and not only describes the aviation side but also from the perspective of the emergency services, AA gunners and a publican. The book is full of “Couleur Locale” , not surprisingly since Peeke’s family lived in Kent during those hectic days.
The book provides an almost day-by- day account of what happened during that crucial summer and fall of 1940. Peeke hits the high spots, the over-optimistic German assumptions, the masterly defence strategy laid down by Dowding and Park, the infamous machinations of Leigh-Mallory (and Bader) and the cruel fact that the architects of Britain’s fighter defense have been sent off ignominiously and never received official recognition for stopping the Luftwaffe.
I recommend this book highly to those readers who want to know more about the real facts of the Battle of Britain.

As featured in Book Spanish

1940: The Battles To Stop Hitler is a new e-book by Mitch Peeke – and it’s clearly a labour of love. As he explains in his introduction, he was motivated to write the book by the twin march of time and political correctness diluting British pride in their victory of 1940.

However he takes a rare approach in treating the Battles of France and Britain as one connected sequence, as it undoubtedly was for both the Luftwaffe and the RAF.

There were clear phases, of course, and these are repeated in Peeke’s narrative, but the broad overview helps illuminate the full ebb and flow events, strengths and morale on both sides.

Historian Mitch Peeke grew up in his native Kent hearing about the events of 1940 from family who lived through it. Peeke proves that history can be just as exciting as fiction...Peeke gives us a civilian eye view of the war, a personal lens, where farmers look up from their harvest to watch dogfights between Germans and Englishmen, dots with vapour trails.